This review was originally written in 2009 for DVDTalk.com. 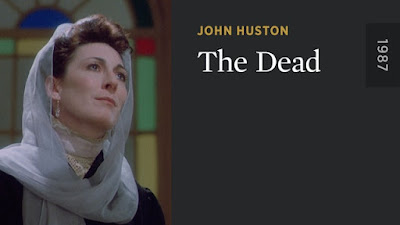 Legendary director John Huston's last film, The Dead, was a family affair. His son Tony adapted the script from a short story by James Joyce, and his daughter Anjelica has one of the two main roles in the picture. This is as it should be, as the film is one that centers on family. The Dead is a movie about remembering times past and the connections that bring us together, as well as the secrets that we hold that keep us apart.
The Dead takes place in Dublin, Ireland, on Christmas Eve 1904. Three sisters (played by Helena Carroll, Cathleen Delany, and Ingrid Craigie) are hosting a dinner for family and friends. The guests come, they enjoy a little song, and then they partake of a goose feast. Amongst the guests is Gabriel Conroy (Donal McCann), the nephew of the two older hostesses, and his wife, Greta (Huston). Throughout the meal, the many attendees share their love of music and their memories of favorite singers, discuss religion, and largely get on well. There is some witty interplay between the two drunks, the good-natured Freddy (Donal Donnelly) and the self-centered Mr. Browne (Dan O'Herlihy), a flirt who judges the younger man but fails to see that he's just as pickled. There is also honor paid to the ladies who have done so much to gather everyone together.
Following the dinner, and after most of the guests have gone, one of the lingerers, a professional singer (Frank Patterson), gives a private performance, and his sad song inspires a melancholy in Greta. The moment marks a seismic shift, taking The Dead from a story about communal nostalgia and celebration to an intimate coupling and private sadness. Gabriel senses his wife's distance, and when they are back at their hotel, gets her to open up. She tells the story of a young man who sang her that song when she was a teenage girl and how he died from his love for her. The implication is that she died with him, at least emotionally. It's a wonderful scene, the bravura moment for Anjelica Huston. Her monologue is a powerful recounting of lost passion, a heartbreaking display of sorrow that is so exhausting for Greta, she immediately passes out, disappearing into slumber. 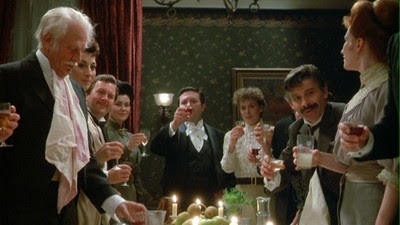 Here The Dead shifts again, getting even more intimate. The final scene of the movie is another monologue, but this time an inner monologue. Gabriel watches the snow fall outside his window, and he contemplates his wife's story, laments the lack of feeling in his own life, and also ponders the fate that awaits them all, the one that found his wife's true love at such a young age. Though the whole of the finale passes without Donal McCann opening his mouth, his performance here is no less memorable than Huston's. There is a subtle juxtaposition between the woman who is unafraid to feel, who lets her emotions pour out, and the man who can never find the same courage.
The Dead was nominated for an Oscar for Dorothy Jeakins' costume designs, and a large part of why this film works so well is the meticulous attention to detail paid by Jeakins, as well as production designers Stephen Grimes and Dennis Washington. The clothes and the sets are elaborate without being ostentatious. They make the story believable without ever overshadowing it. The whole of The Dead is understated in a way that makes it all the more realistic. It is not as attention grabbing as most costume dramas are, John Huston prefers the focus to be on the writing and the people and not the setting. His is a quiet film, one that grows quieter the longer it runs, from the sounds of a party all the way to silence. The final image is of snow falling in the sky, no words, only accompanied by plaintive music that hangs on to the very end, then stopping for a breath, the sky turning to nothing.
John Huston passed away in August of 1987, and The Dead was released that December. I can't think of a more perfect finish for a versatile filmmaker. Huston had debuted as a director in 1941 with The Maltese Falcon [review], a movie that almost literally starts with a bang. What, then, could be more fitting than a final fadeout that echoes with such poignancy without ever making a sound. 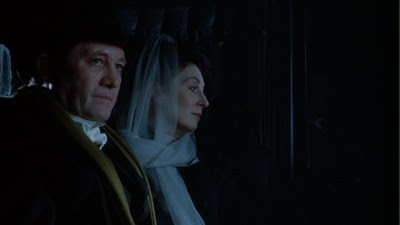