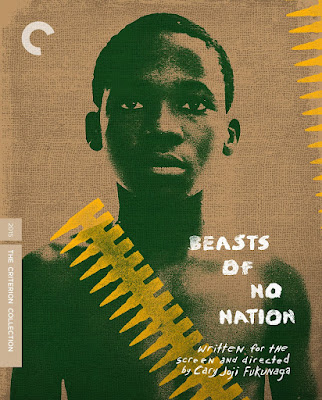 I can’t imagine that Beasts of No Nation hasn’t always been an uncomfortable watch, but the 2015 film has an added level of impact in contemporary times, as the Taliban takes over Afghanistan and a whole population is being disrupted and displaced. While Cary Joji Fukunaga’s anti-war drama is set across a continent in an unnamed West African nation, the effect of violence on the general population is all too familiar, all too real. To say that the threat is persistently terrifying throughout would be an understatement.
Beasts of No Nation is the story of a people, but centered on one person, a pre-adolescent named Agu, played by first-timer Abraham Attah. When Agu’s village is attacked, his mother is sent away, hopefully to safety, and his brothers are killed. He is left to fend for himself, making him perfect prey for an opportunistic warlord like the Commandant (Idris Elba, Luther). The Commandant has a small army of young boys, from pre-teen to tween and on up. His technique is obvious from the start, when he begins by referring to Agu as a thing. His promise to kids like Agu is he will make them a man, an individual, a person. It’s a lie, of course. The life he offers is dehumanizing. He is beating the children into beasts.

Fukunaga is probably best known for the first season of True Detective. He has a knack for long narratives that tend to wander even as they serve a singular purpose. Under his direction, and working from a novel by Uzodinna Iweala, Beasts of No Nation is a journey of resistance to drowning. Agu keeps getting pulled into the terror and the destruction only to somehow pop out of the mire, gasping for air. The only real insight into what he is suffering comes through in Agu’s prayers, which are revealed to us in a whispered voiceover, as if the boy is afraid to be overheard by anyone but his maker. As Beasts of No Nation progresses, Agu’s pleas become less hopeful, and ultimately switch to messages for his lost mother when the child believes God no longer cares.

Perhaps more tragic, however, is Agu’s best friend Strika, played with a kind of bizarre clarity by Emmanuel “King Kong” Nii Adom Quaye. The warfare has caused Strika to stop speaking. Agu’s conversations with him are one-sided. Quaye is mostly blank, but he occasionally conveys emotion through his eyes (that longing look as the Commandant fails to hand him the telescope) or gesture (the pat on his friend’s shoulder to say, “Yes, I’ve been there, too.”) We don’t know what specifically caused Strika to clam up, and we sort of don’t have to. It’s everything.
It’s much the same how Fukunaga need never tell us where the movie is taking place, when, or even why the “rebels” are fighting. Again, it’s everywhere and everything, we need not be specific. The problem is too widespread. Men like the Commandant are all over. We need look no further than the U.S. presence in Afghanistan the past two decades. Was it anything more than profiteers squeezing what they could out of human beings? Idris Elba delivers a careful performance as the Commandant. He never goes too far to any extreme. He is manipulative, controlled, often close to tipping over the edge, but truly unflappable. Even in defeat, his self-belief maintains. “You can leave, but you’ll be back.” Only next to his boss do we see the cracks of an immature man who is not developed enough to truly lead, and is thus exiled to working with troops too naive to know he’s a fraud.

Despite my point above about the ubiquity of the message, it’s important to recognize that there are virtually no white faces present in Beasts of No Nation. This is pretty rare for a film about African strife, but Fukunaga has so thoroughly rejected the white savior trope, even the international soldiers seen at the end are Black. The only appearance of white people is when Agu’s squad encounters a small UN caravan. The symbolism is clear. The van passes and the passengers stare at the child soldiers with mawkish concern as they literally continue going in the opposite direction.
In the battle sequences, some of Fukunaga’s trademark staging is evident, but in this instance, his long, uncut shots aren’t meant to show off. You aren’t meant to stop and think, “Oh, wow, there were no cuts” the way you might have in True Detective. Here those set-ups are more stealthy, meant to only work on your subconscious. Fukunaga goes to great lengths to avoid glamorizing violence. He keeps the action grounded, dirty, and chaotic. There is no pleasure in the killing, no visceral release. It’s just so plain and normal, it’s actually disconcerting.

Thus, when the filmmaker indulges in a little bit of surrealism, it hits differently. The most prominent example of this is when Agu is on some kind of hallucinogen and the world changes colors around him. Green plants become a pale amber, the skies go blank. It’s hellish looking, but it provides some kind of relief and escape. This means, ironically, Agu finds relief in damnation, the apocalypse is better than real life.
There is an obvious Lost Boys reference to me made here. The raggedy patchwork costumes of the soldiers make them look like extras from Hook. But I kept seeing another duo when I looked at Agu and Strika side by side: the brothers Black and White from the anime Tekkon Kinkreet [review]. The aesthetic of the hoods they wear, their mismatched faces--I see Taiyo Matsumoto’s tripped-out antiheroes. The four boys also face the same kind of threat: the encroachment of adult evil on their childhoods. 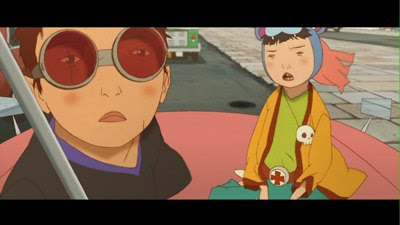 It ends differently for Agu and Strika than it does for Black and White, but it also ends differently between the two boys themselves. Which, given how few escapes there are for either--death, becoming the next Commandant (you can only be #1, be #2 at your own peril), or somehow leaving the army alive--the odds are a bit stacked. I don’t want to give too much away, but the end of Beasts of No Nation does offer some hard-earned hope. Just as throughout the film, the finale rests on Agu, the wide-eyed boy who has now seen and experienced it all. In his final prayer, and then his final spoken lines, we understand where he has ended up. Those last words reveal not just his maturity, but how he has survived. He has maintained a singular thought this whole time, held on to a dream that he would once again find the family that knows and loves him as the child they left behind. This mission will continue to maintain him beyond Beast of No Nation’s closing scenes, which lead us to believe that the lost boy need not be found as long as he can embrace the future that lies ahead. He is heading into the literal ocean, not to drown, but to resist the waves and swim.

This disc provided by the Criterion Connection for the purpose of review.
Posted by Jamie S. Rich at 1:54 PM