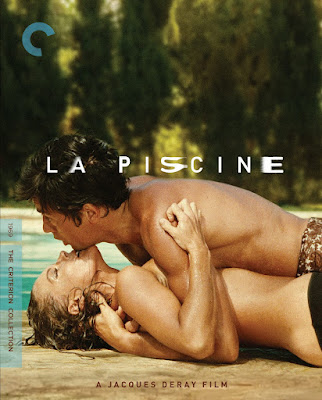 Thriller might be too strong a word here. La piscine isn’t a nailbiter in most traditional senses, though you will spend the first half of the movie worrying about how it will all go wrong and the second half wondering what the consequences will be. It stars Alain Delon (Le samourai [review]) and Romy Schneider (Henri-Georges Clouzot’s Inferno [review]) as Jean-Paul and Marianne, a couple on vacation at a remote villa with a swimming pool. They spend their time canoodling with one another, bickering a little, engaging in a power dynamic that regularly explodes in wild passion, her on top this time and him next time. It’s just the two of them. It works. It’s good.

It can’t last. We know this. 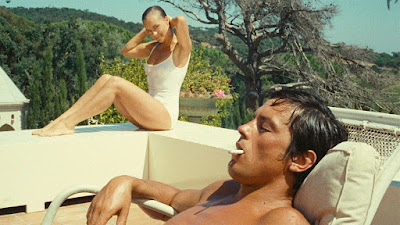 Enter Harry (Maurice Ronet, The Fire Within [review]), an old friend of Jean-Paul’s and an old flame of Marianne’s. He has arrived with Penelope (singer Jane Birkin), a grown daughter no one knew he had. The striking young woman becomes the object of all attention. Does Jean-Paul have a thing for her? He’s inscrutable, it’s hard to tell, but does Marianne think he does? And, gross, is Harry attracted to his own daughter, too? Or is it all just the macho musk in the air? Because Harry definitely still has a thing for Marianne and this might just be about these two brutes—one who talks to much and one who says very little—wanting each woman so the other can’t have her. 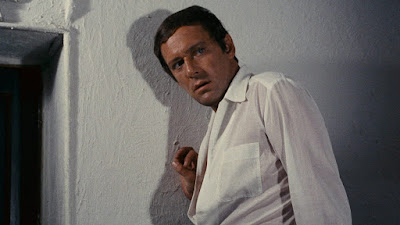 A few days go by with normal activity. Couples split off, confessions are made, everyone kind of agrees to not like Harry, Marianne makes some very French guesstimations as to Jean-Paul’s potential lust, and Deray arranges the characters around his sets like chess pieces waiting to move. It’s funny, the filmmaker never tips his hand, we kind of guess that maybe something happened between the older man and the young girl (she’s of age, don’t worry), but neither gives up the info. It’s all about guilty glances and knowing looks. Delon is the king of deadpan, but Birkin could give him lessons in not giving anything away. What’s fascinating about her performance is that Deray presents her as an object to gaze upon, but she resists such an inelegant notion. Penelope may be the perennial observer in most scenes, but those eyes aren’t empty. She sees how ridiculous these adult machinations are, even if she’s not always aware that she’s falling into them. 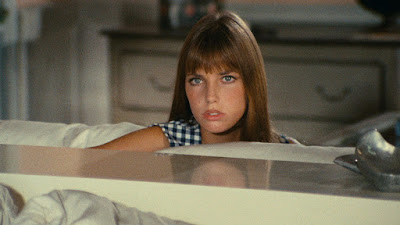 La piscine, which I should note is available both on disc and currently streaming on the Criterion Channel, is more character than plot, a tale of predator and predator. There is no real prey here. Marianne doesn’t do anything she doesn’t want to, and she’s more than willing to rebuff or welcome advances as she sees fit. Schneider has a regal bearing that automatically places her in charge. There is also a bit of the cliché that she’s the emotionally mature one that will help these two boys keep it together. Harry is a narcissist, Jean-Paul is troubled in ways that are only hinted at. We hate them both, but Harry is the invader, the bully, the interloper…and thus the villain. He’s the one the audience wants to see fall.

It’s interesting that Deray has made a pretty chilly drama even though it’s set in the very sunny French summer. How can there be secrets when everything is bathed in so much light? Even in a nighttime scene, Jean-Paul comments on how there are too many electric lights, and they are drawing mosquitos. What a sly thing to just let slip out in conversation, a metaphor for the whole of the proceedings. People flocking to these bright climes only to feed on one another. And the biggest dangers come when those people bring their secrets out of the dark. The two pivotal scenes that influence the impending violence are confessions: Marianne telling Harry how she really feels about Jean-Paul (i.e. it can never be you) and Penelope telling Jean-Paul how much she really does not like her father and how much her father does not like Jean-Paul. The latter is probably the best thing in the movie. Birkin is suddenly wholly and completely real, safe to be herself, and the steely Delon gives her all the space she needs just by listening. 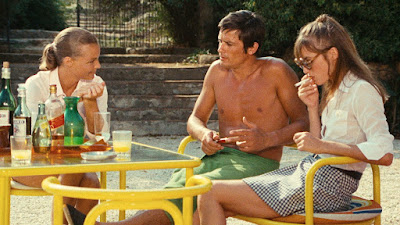 That’s about explicit as La piscine gets. Deray doesn’t make any grand proclamations about love or desire, and if no character is going to explain their motivations, it’s very much up to the audience to decide. Many will be as confused as Penelope at the end. Her face as she departs suggests she knows what happened, just not what to make of it, and also likely unsure why everyone else is going along.

The answer to that? Because it’s intriguing! From start to finish, La piscine holds our gaze, the fifth participant in the (blood)lust. 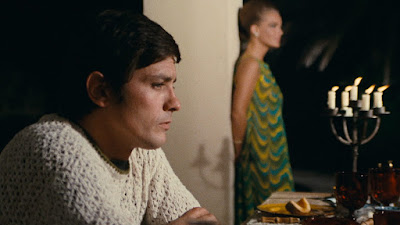