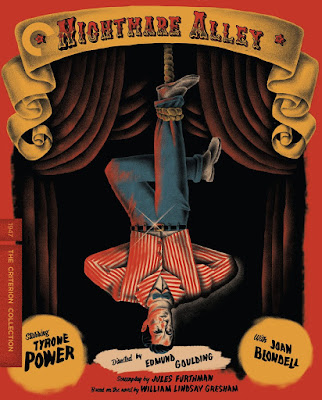 That’s the reason the local sheriff gives when he shuts the carnival sideshow down. He’s specifically acting on a tip that the carnival has a “geek,” a human who will bite the head off a live chicken or eat whatever filth is tossed his way. But the cop might as well be talking about everyone in the troupe, and all the things they do to each other. And wait until hear hears about what happens when that kind of energy is sent out into the real world.

Nightmare Alley is a story of double-crosses fueled by petty jealousy, and the price of ambition when funded by emotional pain. Tyrone Power stars in this freaky noir as Stanton Carlisle, a hustler who picks up tricks for the sideshow mentalist Zeena (Joan Blondell) and her alcoholic partner Pete Krumbein (Ian Keith). After an accident involving moonshine and some potential jail time threatened by that same local sheriff, Stan reveals who he is to everyone in ways both intentional and unintended. He ends up being forced into a marriage with Molly (Coleen Gray), the carnival ingenue, but not before they have both learned Zeena and Pete’s system. It’s enough to break out of the rural confidence racket and go legit in big city nightclubs doing the blindfold act, where Molly tips Stan off using a verbal code so he can make the audience think he’s reading their minds. 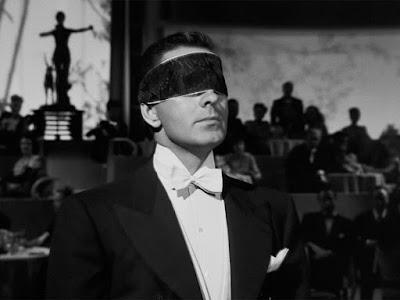 I love the names in this movie. Stanton Carlisle just sounds like the name of a crook trying to be fancy. And then there’s Krumbein. Anyone else hear Nelson Muntz getting upset that Marge Simpson called him a “Crumbum”? And we haven’t even met Lilith yet, the psychoanalyst played by Helen Walker that inspires Stan to expand his racket to more personal cons involving seances and spiritualism. What his encounter with the confident professional ultimately shows him is that everyone is on the take. Shakedown artists work in fancy offices, too. And Liliths have a reputation for a reason. 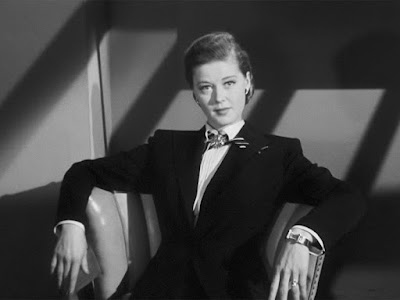 Released in 1947, Nightmare Alley held a strange reputation for a while. Edmund Goulding’s film was one of those lost classics that one could read about in books but never find on video shelves. It was infamous for its bleak outlook, especially its shocking ending. Amongst film noir scholars, it was considered particularly weird, the rare noir that wasn’t all bullets and concrete, but just as cynical in the way it trades on mental games and “the other side.” When I finally saw Nightmare Alley, it was via a bootleg at my local arty video store. They had a copy someone had taped off of AMC. Same story with Billy Wilder’s Ace in the Hole [review]. True cult favorites left to languish even as their status amongst cineastes grew.

Even watching it via a faded and low-resolution tape, the genius of Nightmare Alley was not lost on me. Tyrone Power grafts steely determinism onto a fragile ego, inventing an incredible noir anti-hero, a fast thinker whose brain also had whatever the mental equivalent to a glass jaw might be. One hit, and he shatters. The actor is electric onscreen, possibly never better. Perhaps a veteran actor like Power understood too well the veil between performance and reality, how Stan was much better at reading other people’s cards rather than his own. 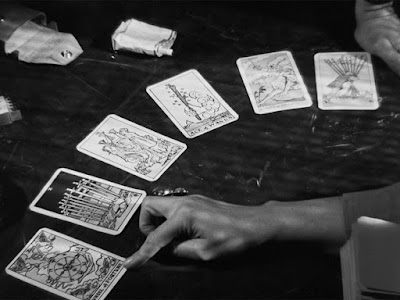 Cards are important in Nightmare Alley. Not just the ones that Stan and Molly use in their act, where diners write down the questions that open them to Stan’s fleecing, but tarot carts. Zeena does two readings in the movie, and each predicts the downfall of a man in her life. Being a noir, neither should be a spoiler, but I’ll let you guess. Just yesterday I watched Blondell as a side player to Barbara Stanwyck in Archie Mayo’s pre-code marriage drama Illicit, and despite there being fifteen years between the two movies, she was probably even more vibrant in this one than in the earlier role. Blondell makes Zeena a formidable woman, remorseful for her past sins, but unafraid of challenging Stan when he wrongs her. She steals the show from both the other actresses, who don’t quite have the chops she does. Then again, maybe Goulding and writer Jules Furthman are doing it on purpose, reducing the women that Stan ostensibly betrays Zeena for, by making Molly a nervous sap and Lilith calculated and unemotional. (Side note: Criterion includes tarot cards representing the main characters in their new edition, which also boasts a transfer that isn’t just light years ahead of the bootleg I rented once upon a time but also the Fox DVD from the ’00s.) 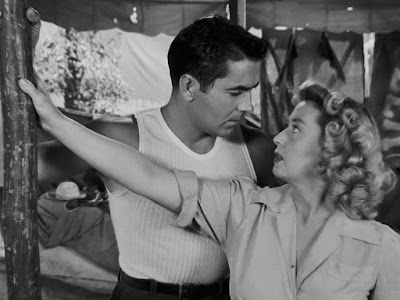 I make no secret of Nightmare Alley’s influence on my Archer Coe book series. There are nods to it in various names used in the comics, just as there is a major tip of the hat to Orson Welles. When wanting to find a way to do a private detective comic that wasn’t your standard riff on Chandler, Cain, or Hammett, it came to mind to make the character a stage hypnotist instead, someone whom people in trouble might ask into their lives and share their intimate secrets with in order to get help. Of course, the big difference is that Archer Coe is a former bad man trying to make good, and Stanton Carlisle is just plain bad. 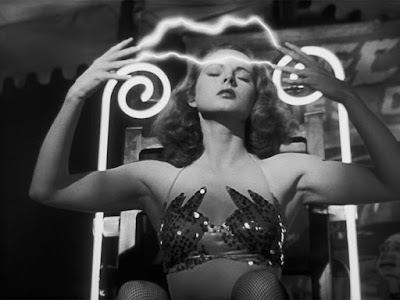 “Should I let the man’s soul be lost forever, or should I stake my own to save it?”

The change of routine and setting is freeing. Nightmare Alley doesn’t fall back on typical noir tricks. There is no gunplay or bag of money (though there is an envelope). The traditional hand of fate in most noir is now tied to mysticism, karma, and according to Molly, Stan is also tempting the hand of God. The charlatan’s problem is he wants to be a denier, but deep down he’s a believer. The hubris that will bring on the Godsmack is in trying to kid himself and Molly that there’s something good in his thieving, that he’s helping the people he harms. We know he knows it’s a trick, but he also knows the consequences of messing around with people’s memories of their lost loved ones, and like the criminal who pulls the heist even after one of the crew falls off, he chooses to ignore it.

Reassessing that in noir terms and examining how Lilith dresses him down in the final act, Stan is your typical genre screw-up but ultimately victim of memory. In this case, the memories he exploits causes the past he’s tried to disregard to catch up with him. The tuxedoed high society performer is exposed as a carnie in a wife beater. Maybe if he had taken the time to get an answer to some of his earlier questions regarding how a man could drop so low, Stan would have been wiser. It’s that damn hubris again. It was never going to happen to him. 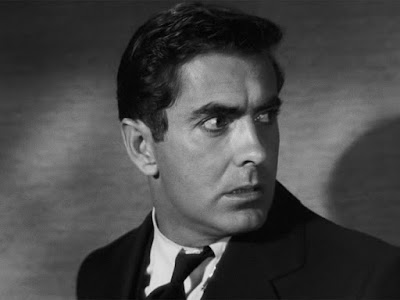 One final sidenote, in addition to the fine package Criterion has put together with the old show poster design, interviews, and porting over Fox’s critical commentary, they also commissioned a new essay from the incomparable Kim Morgan. It’s no coincidence that Kim is also the co-writer of the upcoming remake of Nightmare Alley with director Guillermo Del Toro. Just take a look at the cast – Bradley Cooper as Stanton, Cate Blanchett as Lilith, Toni Collette as Zeena – and this new version has a chance to be something. Look for Nightmare Alley later this year! 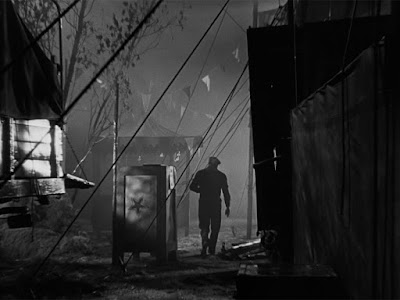