LONELY ARE THE BRAVE - CRITERION CHANNEL

This review was originally written for the DVD release of the film in 2009. 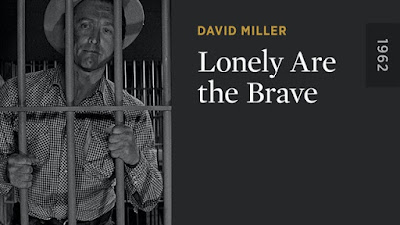 Every once in a while, a movie drops out of the great film library in the sky and lands in my lap and I find myself at a loss for an explanation of why I haven't heard of it before. I consider myself reasonably well informed, and don't get me wrong, delight in stumbling upon such a surprise, but if I assume that my lack of knowledge reflects the movie's general reputation, then I can't help but think it's terribly unfair, especially given how much dreck survives at many another good movie's expense. The new "Universal Backlot Series" appears designed to rescue just such a movie from the dustbin of obscurity, the line's own mission statement claiming it to be "an ongoing collection of rare gems, overlooked groundbreaking work and films of historical and cultural importance." With its first couple of titles just coming to DVD, at least one of them--the 1962 Kirk Douglas vehicle Lonely are the Brave--is proof positive that whoever came up with this marketing concept is a man (or woman) of his (or her) word.

Lonely are the Brave is, for lack of a better descriptive, a modern-day western. Based on a book by Edward Abbey, it tells the story of Jack Burns (Douglas), a lone wolf with a roaming spirit. To Jack, "Don't Fence Me In" isn't just a song, it's a code of conduct. At the start of the picture, he rides his horse Whiskey through New Mexico, cutting through any wire that might block his path, crossing a busy highway on the way to where he's got to go. He's heard that his best buddy Paul (Michael Kane) has gotten himself into trouble, and he wants to see what he can do to help his pal out. Apparently Paul has been locked up for giving illegal Mexican immigrants shelter while they get on their feet in their new country. It's not that Paul has any political beliefs on the matter, it's the right thing to do. People should help other people. 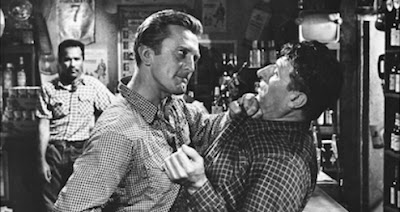 The "right thing to do" is of the utmost importance, and though Jack jokingly phrases it as more "Do What You Want" (he says that's the name of Paul's mistress), it seems obvious that what he's really talking about is not a libertine approach to having his way, but a common sense idea. He represents an older way of doing things. As a cowboy, he still believes in the frontier, of a man getting by on his wits and what he can carry on his back. To him, modern life is about fences, about more than just the punitive prisons, but about regulating everything to death. Though arguably a virtue in a lot of ways, this existential stance also has its downside. By sticking to his guns, Paul is leaving his wife, Jerry (a very young Gena Rowlands in only her second film), and their child to fend for themselves. Likewise, we get the very clear sense that Jack and Jerry might have been the ones who were really in love, but even the idea of a house and family was too much for Jack. He's that scared of being tied down. Jerry rightly sees this as a refusal to grow up, a stubborn contrariness. As with any such decision, it's about what price the individual is willing to pay to stand by his beliefs. 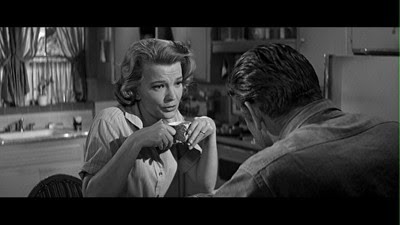 Turns out that Paul has found out how high he's willing to go. Jack's plan is to get himself in a bar fight--against a one-armed man, no less, and he's played by Bill Raisch, David Janssen's quarry in "The Fugitive" series--and get arrested so he can join Paul in the pokey and the two of them can bust out. Paul doesn't want to add five more years to the two he's already got, so he refuses to go. Jack is not to be deterred, and if he must go it on his own, he will. This shifts Lonely are the Brave into its second gear, with the rest of the movie following Jack and Whiskey across the open wilderness, the police in hot pursuit. If the man and horse can just get over the mountains, they'll be home free. Leading the pursuit is the sardonically weary Sheriff Morey Johnson (Walter Matthau), a fellow who seems to be as individualistic as Jack, even if his job is to enforce the rules. It's a subtle characterization, and Matthau's performance is a devilish hoot. Look at it a certain way, and the rest of the cops, who are quite close to the edge of "bumbling," show what happens when a man has too much order, too strong a system, propping him up and keeping him from having to try as hard. Sheriff Johnson is the one guy on the ball, the one who uses the law as a tool but not as a crutch. Alternately, George Kennedy's sadistic prison guard games the system, hiding behind it as he pursues his own agenda. Modernity can be our best friend or our worst enemy. Likewise, technology fails when used as a blunt instrument. Johnson's jeep can't follow Jack all the way up the mountain, and the helicopter they bring in fails to capture the man. To go where Jack is going, even if just in pursuit, requires a different ingenuity. 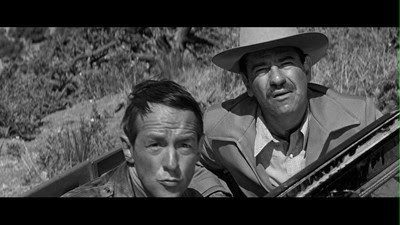 The screenplay for Lonely are the Brave was written by Dalton Trumbo, one of the Hollywood 10, a collection of writers who were blacklisted in the 1950s when Joseph McCarthy trampled all over the rights of the citizenry. (Don't get me started on the revisionist history that tries to reclaim Tail-Gunner Joe as a hero. Just because he was right and there were some spies in government doesn't excuse everything else; it's like letting Ted Bundy off the hook because it turned out one of his victims was a shoplifter.) Trumbo did jail time and found himself unable to get work under his own name, penning movies like The Brave One under various names. He was a friend of Kirk Douglas, who hired him to adapt Edward Abbey's novel and had already insisted that Trumbo get proper credit on Spartacus. It's just the kind of courageous act Douglas' character would do for a buddy in the movie, and it's also not a stretch to see where Trumbo's own experiences informed how he put this script together. Jerry means well, but her insistence to go with the way things are is detrimental to what Jack and Paul see as human decency; the government is full of thugs and idiots; a man is expected to conform, and if he doesn't, he is persecuted--all of these plot points parallel Trumbo's own experience. Yet, the writer resists any urge to proselytize, his skill lies in letting the story tell itself. The greater meaning is the blood that pumps through it, but just like the blood that keeps us all up and walking around, you never see it, you just know it's working.

There are many great touches throughout Lonely are the Brave. The relationship between Jack and Jerry, and particularly the performances of Douglas and Rowlands, is touching and full of deep, unexpressed emotion. The ethnic make-up of the town, and Jack's place in it, is progressive while still being honest--Jack may call the Mexicans "amigo" to their faces, but that doesn't mean he doesn't also call them "wetbacks" in private, nor does that make his friendliness and acceptance toward them any less genuine. The staging of the barroom fight is fantastic, and the verbal exchange leading up to it as hilarious as it is ultimately menacing. The staging of all the scenes is expertly handled. David Miller's best-known movie is probably Sudden Fear [review] with Joan Crawford, and that tense thriller shows a talent for establishing mood and a facile approach to mis-en-scene. Here the director is just at good portraying the man on the run, working with real environments, which in turn were photographed beautifully by Philip Lathrop (The Pink Panther, They Shoot Horses, Don't They?). The whole film has a naturalism that can look quite dangerous in some of the mountain scenes. The tumbling rocks lead one way, the open sky draws Jack toward the other, and both are very real. 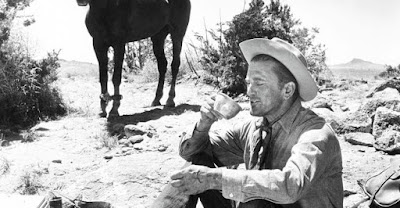 I have to admit, though, the best stuff in Lonely are the Brave comes in the scenes when Jack is alone with his horse. Even Kirk Douglas is willing to admit that Whiskey upstaged him. I've always liked movies that had men alone with their pets. Jack keeps up a running dialogue with Whiskey that blurs the line between performance and authenticity. Is that really Kirk Douglas negotiating with a stubborn horse? Is the real-life Whiskey that good of an actor?

Lonely are the Brave isn't a perfect film, but it's damn close to it. If I could go in with scissors and snip out one element, it would be to cut down the scenes that take us away from Jack and over to Carroll O'Connor as a truck driver racing against a deadline to get a shipment of toilets delivered. Trumbo and Miller set up this plot element fairly early, and though they only cut to it a couple of times, its purpose is obvious and telegraphs the bitterly ironic ending of the film a little too early. The picture's finish is still effective, but the tragic turn would have even more impact if the filmmakers had more faith in the truth of the scene and didn't feel they had to resort to such a standard screenwriting set-up. In a film about not following the rules, it's the one time the writing succumbs to them. 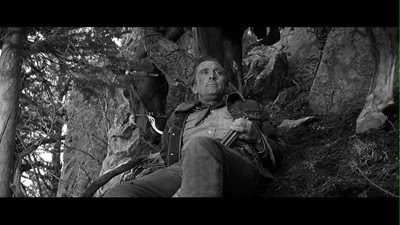 It's such a minor complaint, though, it almost seems pointless to bring it up. I feel like I'm staring at a beautiful sunset and complaining because one cloud is shaped like a skunk instead of a bunny. Shouldn't there be room for all of God's creatures in a golden sky? Those final shots of a silent Douglas are powerful and the way Miller takes us out of the story and sends us on our way is visually poetic. It's one of those endings where you have to take a breath when "The End" comes up on the screen, because your heart has been in your throat for the last couple of minutes and it's been cutting off the oxygen. The story really couldn't have gone any other way, and how much small triumph is to be found in it is up to the individual.

Seriously, how did I go without having seen this movie for so long? Lonely will be the cinephile who has not seen Lonely are the Brave. This DVD is truly an unearthed treasure. Send it straight to the top of your "get" list. 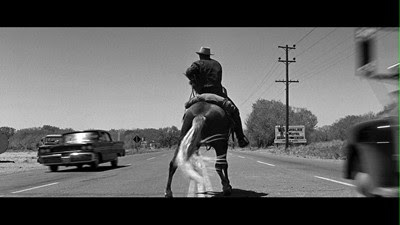