This review originally written for my Confessions of a Pop Fan blog in 2004. 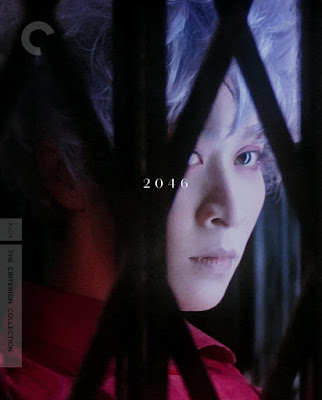 If I could be Wong Kar-Wai, I would be. I would take that opportunity if it came. There are few people I respect so much in the world today, who follow their crazy ideas and somehow manage to make it work, despite all odds. He works his camera the way a novelist works with words, changing and diverging and revising. Most filmmakers can't afford to toss film away, but Kar-Wai will make three or four films on his way to the one he lets you see.

It goes without saying that as soon as his newest film, 2046, showed up on eBay, I was all over it. The discs came out in China within a week of the film opening, an attempt to combat rampant bootlegging over there. It turns out patience would have been a virtue. This was a Face release, and they are known for having their logo pop up at regular intervals (this time, unlike their more subdued product placement on their extended Hero DVD, showing up in three separate pieces coming from three separate corners), and since it is the mainland version, Cantonese speaking characters, including Tony Leung's Chow Mo Wan, were dubbed into Mandarin. But those are small prices to pay to see the movie I was looking forward to more than any other this year.

Thank goodness I wasn't disappointed! I am drunk with the love I have for 2046. As a narrative, it is a chapter in an ongoing project that now encompasses Days of Being Wild and In The Mood For Love [review]. It finds Chow after the failed affair of In The Mood. He has turned himself into a callous womanizer, escaping from his personal pain in the science fiction he now writes. As we watch him stumble through several relationships, we also get a glimpse of the literary world he is creating. In the future, there is a place called 2046. People take a train there to retrieve their lost memories, but no one knows quite how it works since no traveler has ever returned. 2046 also happens to be the number of the room in the hotel next to his, which is the room where he and Su Li-zhen (Maggie Cheung) would retire to in In the Mood to have their faux affair and write their martial arts serials. As a further nuance, it's the last year Hong Kong rules itself.

Kar-Wai has always been obsessed with time and how it weighs on people. In 2046, he creates three timelines: the late '60s world of Chow Mo Wan, the future world of his fiction (a fiction within a fiction), and the present world of the viewer. The third element is important, since Kar-Wai always demands a certain level of involvement of his audience. You can't be a passive viewer, you have to get completely inside the narrative and puzzle it out. Though 2046's lines are more clearly delineated than Kar-Wai's more ponderous efforts, it still shifts subtly. If you aren't giving it your full attention, you will rejoin the film in a completely different place than where you left it.

The other pervasive theme in all of Kar-Wai's films is the transience of human connections and the pain that comes from missed opportunities at love. Circumstance gets in the way far too often. In 2046, Chow engages in three significant relationships: the call girl played by Zhang Ziyi, the hotel owner's daughter played by Faye Wong, and the mysterious gambler played by Gong Li. Each encounter dissolves because the lovers can never get on the same page with one another. When Chow is loved, he plays the cad; when he is in love, he loses; when both participants are in love, it can never be thanks to ghosts from the past. They move in and out of one another's lives with a poetic sense of tragedy, and Kar-Wai's editing creates a melody of heartbreak. In much the way a novelist can create a symphony of emotion with words, Kar-Wai's camera delivers an impact beyond the action and dialogue.

The image that still resonates the most with me is when Faye Wong's character Wang Jing Wen asks Chow to rewrite his story with a happy ending for her. He sits down at his desk and days pass, his fountain pen poised above the paper like a needle waiting to come down on a record, and he can't write a line. He doesn't know how to write his way to happiness.