This review was originally written for DVDTalk.com to cover the film's theatrical release in 3D in 2014. 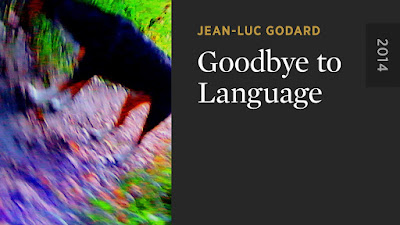 I'm always in for a new Jean-Luc Godard movie, especially since, anymore, there are several years between his feature-length efforts. It's been four years since he released the acclaimed Film socialisme [review], and it was six years between that one and Notre musique [review]. That both of those films showed the eighty-three-year-old auteur was as engaged and vital as ever makes it all the more disappointing that his latest, Goodbye to Language (Adieu au language in his native French), is the end result of an artist spinning his wheels.

Anyone familiar with Godard's 21st Century work will recognize the technique. Goodbye to Language is another collage of documentary, random clips, and fictionalized scenarios artfully arranged to provide a platform for the innovative filmmaker to advance his philosophical ponderings. Where Goodbye to Language differs from Film socialisime, at least aesthetically, is that this time around Godard is working in 3D. Throughout much of the film, the old prankster proves to have a knack for the technology. Many of his frames are arranged with a surprising eye for how they will appear with added dimensions. These moments can be as lovely as others are jarring. At various intervals during Goodbye to Language, Godard overlaps images and text in a way that assaults the eye, almost as if he wants to prevent the audience from ever getting too comfortable. 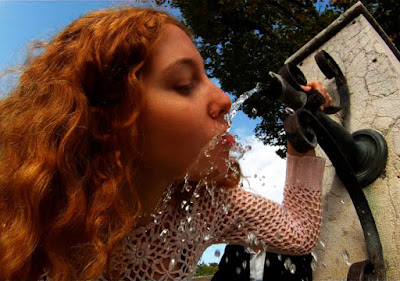 While his clever use of separate shots in the right and left quadrants is somewhat astonishing, other bits will leave you wondering just what the hell the point is supposed to be. Is it to assert the supremacy of image over sound? Over narrative? Both break down during Goodbye to Language, including a couple of awful noises that may have you worried the theater's speakers have malfunctioned, but I have to say, neither dismantling has much effect. Godard's mis-en-scene here has three different categories: an ongoing discussion about equality between a couple (more Le gai savoir [review] than Contempt [review], alas), footage of what is presumably Jean-Luc Godard's dog, and the random gatherings of images that the aging filmmaker finds interesting. The accumulated pieces arguably add up to some kind of whole, but then again, maybe they don't. That might be the point. It's hard to say after one viewing, as the 3D makes an already difficult film even harder to keep up with. Finding the subtitles within the frame meant constantly having to refocus one's gaze.

The thing is, and what troubles me the most about Goodbye to Language, is that it never engaged me enough to make me want to try again. Unlike the aforementioned Notre musique and Film socialisme, I am not sufficiently intrigued by what was up on the screen to want to put the puzzle together. I didn't feel challenged so much as I felt bored. Part of it might be that Godard's political reference points have changed hardly at all in the past several decades. Hitler, Mao, the genocide perpetrated against Native Americans--it's all been covered by the director before. His championing of women's rights seems hollow given how his lead feminine mouthpiece is naked for most of Goodbye to Language. Ironic that a film partially about the act of looking would not question its own gaze. 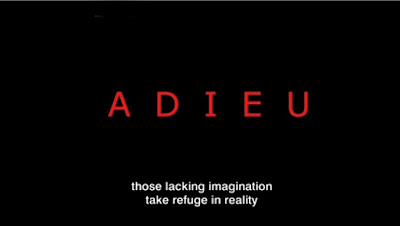 Animal rights get just as much time as women's rights, which I guess is kind of new. There are long passages of Godard following the dog around, catching him in the right pose, pondering his devotion. After a while, it started to feel like I was watching the world's most expensive and technologically advanced YouTube channel of one old man's videos of his canine companion. 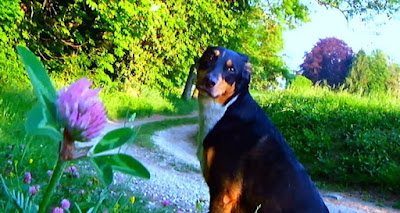 Perhaps I'm being too harsh, perhaps not. Godard himself was never known to go easy on other filmmakers, so why should we go easy on him? Goodbye to Language is a movie, after all, that has two scenes of a man loudly defecating, as well as another of the dog having a movement of his own. Attached to these images are the most definitive statement Goodbye to Language ever makes: everything, every thought and idea, eventually turns to poop. So here we are, witnessing Jean-Luc Godard learning to flush.

That said, he's still Jean-Luc Godard and serious cinema fans should see anything he does at least once. Twice if you can manage. And in the theater one of those times so you can see the 3D work in its natural habitat. To pretend I won't be going to see Goodbye to Language again will be like a Star Wars fan bitching about J.J. Abrams claiming he won't go see the new installment when it comes out. You know that dude is lying. And who knows? Maybe I'll be surprised and it will strike me in a whole different way. Regardless, Goodbye to Language is not enough of an incoherent stinker to make me bid adieu to Jean-Luc Godard, even if it does give me serious pause. 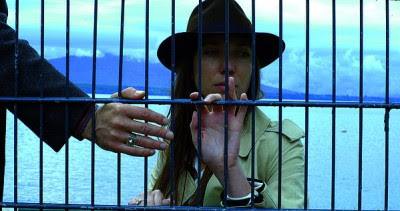