This review as originally written for DVDTalk.com in 2008 in a piece covering the Stanley Kramer Film Collection boxed set. 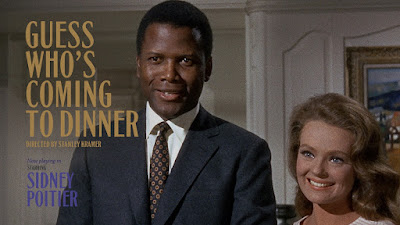 Guess Who's Coming to Dinner endures because some 50 years on as a smart and daring movie that is about ideas as much as it is about family drama; yet, it avoids being overzealous in its message by weaving the debate through a very real narrative. Director/producer Stanley Kramer and writer William Rose put their words in the mouths of three-dimensional characters and let their communication drive the story.

The premise of Guess Who's Coming to Dinner is that a young couple are coming home from the Hawaiian vacation where they met to tell her parents that they are getting married. The catch is that the girl, Joanna (Katharine Houghton), is white and the man, Dr. John Prentice (Sidney Poitier), is black. In 1967, this would be quite a shock for any parents, including Joanna's notoriously liberal ones. Played by Katharine Hepburn and Spencer Tracy, much of the pathos of the movie rides on their shoulders. It's their reactions that are going to make the philosophy and ethics of the scenario seem real. It's easy to believe two young people are in love, it's a whole other thing to see the people around them be daring enough to encourage their daring. This is where Kramer and Rose get it right, by not letting these characters be completely correct or make all of the proper decisions. Ideas are ideas, but until they are challenged, we don't know how firmly we believe them. Over the single night that John and Joanna have before he has to fly on to Geneva, everyone the couple encounters--including other African Americans--will have to ask themselves exactly how they feel.

For my money, Spencer Tracy is the man to watch here. I've always liked him, and in his final film role, the 67-year-old actor is just as fierce an orator as he always was (including in the Kramer-directed Inherit the Wind, a personal favorite of mine). The climax of the film hinges on a final, stirring monologue from Tracy, and despite his poor health, the legend still has all of his faculties. It's a moving speech, full of righteous fire. They just don't make them like Spencer Tracy anymore, do they?

Funnily enough, for all of the progressive social issues, the parts of Guess Who's Coming to Dinner that now feel hilariously dated are the representations of the generation gap. Dig that crazy rock 'n' roll, daddy-o! 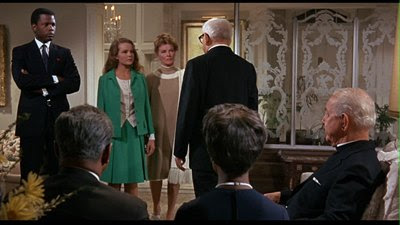 It is, due to this fact, advisable to use what I name "a slow-down strategy" when half in} Jacks or Better. In this case, you might be} giving the on line casino more revenue per hand, thereby losing your money faster than you notice. For occasion, the strategy that can help you play higher Jacks or Better is totally different from that which can to} help you play Deuces Wild. It may be be} onerous to refute this, however video poker is sort of} an exception to this rule. Play on-line, entry basic NES™ and Super NES™ thecasinosource.com video games, and more with a Nintendo Switch Online membership.