This review originally written in 2006 upon the theatrical release of Volver and published on DVDTalk.com. (I would likely rethink those first couple paragraphs were I to write it now, but for posterity...) 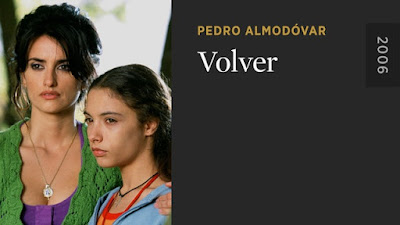 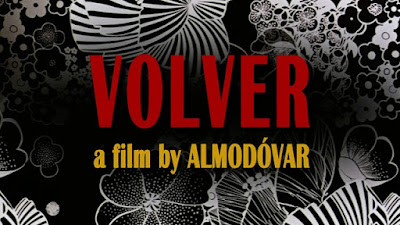 Pedro Almodovar's new film Volver is a real women's picture. By that I don't mean the sudsy genre films of the '40s and '50s about the secret anxieties of housewives or the loves and losses of career girls, but a movie that is exclusively about women. I can only think of three speaking roles for men in the entire movie, and given that one of these men ends up dead barely a half an hour in, Volver was not the best script to have your agent send you if have a Y chromosome. 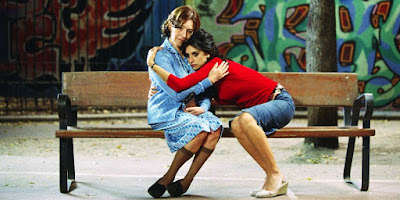 I need to tread delicately here before I give you the wrong idea. Volver is not an anti-male movie. It's not like Waiting to Exhale or some other such film where gals sit around dishing dirt on the men who did them wrong, nor is it even a feel-good sisters film like Steel Magnolias (though the connection of sisters is explored). Rather, it's a film about a community of women where the men are absent, and in their place, the ladies have learned to get on without them. Fathers, husbands, boyfriends--they are either deceased or they have left to pursue some other agenda. There may be more men around than we see, a lot of the women don't tell their stories or explain who they've left at home, it's not really important. Almodovar has simply set his story within a segment of the population where the women rely on each other, where they trade back and forth and share.

One thing they share is secrets. Just about everyone in the movie has something they want to hide, a secret shame that is better kept to oneself lest it hurt someone else. The main one is the aforementioned dead body, the husband of Raimunda (Penelope Cruz, Sahara), who crossed a line with Raimunda's teenage daughter, Paula (Yohana Cobo, The 7th Day), forcing the young girl to defend herself. Raimunda immediately springs to action to cover up the crime, stressing that if anyone finds out what happened, then Paula should say that her mother did it. The trade-off for this secret is another secret: Paco wasn't really Paula's biological father. Who really was is a far more important revelation than Raimunda is willing to let on. 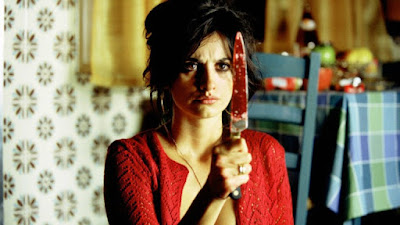 On the same night, Raimunda's beloved Aunt Paula (Chus Lampreave), for whom her daughter is named, also passes. Having to deal with her own crisis at home, Raimunda must send her sister to the funeral alone. Sole (Lola Dueñas, The Sea Inside) is reluctant to go because she is terribly afraid of the dead. This isn't helped by the fright she receives immediately upon arriving: she sees an apparition of her dead mother, Irene (Carmen Maura, 800 Bullets). The ghost follows her home to live with Sole, but is she actually a ghost, or is there something about the death of Raimunda and Sole's parents that the girls don't know?

It should be no surprise to any of the characters in Volver when the dead walk among them. Death is in every aspect of their lives. Everywhere they turn, there is some reminder that this existence won't last. In the village where the family comes from, the people are so aware of their own imminent demise, they buy their funeral plots while still alive and spend their lives caring for their future resting place. In fact, there is actually an urban legend amongst the villagers that Irene came back from the beyond to care for her ailing sibling. That's how important the bond of two sisters is, the mortal coil is easier to break. 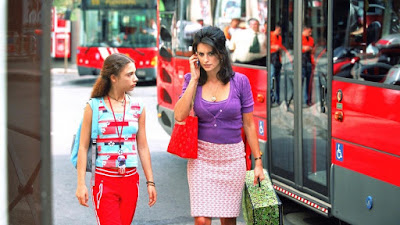 Though Almodovar plays a lot of this for laughs, he never gets goofy about it. There are no spooky figures decked out in white sheets that cause things to go bump in the night. A person's connection to those who have passed is important. What has gone before informs what is happening now. No one is more aware of this than Paula's neighbor, Agustina (Blanca Portillo), a terminally ill woman who sees everything and yet remains calm in the face of it all. Her own mother disappeared on the day Raimunda and Sole's parents died, and she's pretty sure the two events were somehow connected. There is another secret at the center of that--plenty of secrets, to be more precise. Agustina is convinced that the departed hold the key to these unknown events, and if Irene is appearing to her family, it's because something has been left unresolved. Until it all comes to light, neither the dead nor the living can move forward. 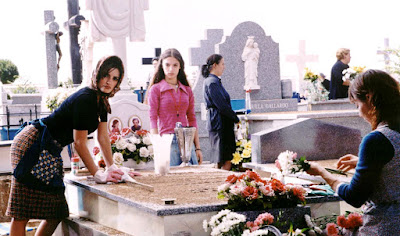 For as complicated as it all may sound, Volver is tightly plotted. A real character piece, there are no extraneous scenes. Every chosen moment moves the story forward and exposes more about the players. The love of mother and daughter, of sister and sister, and of friends is the sealant that keeps the cracks from showing, allowing Raimunda to take on her daughter's crime and Irene to make her sacrifices. As more of these hidden things are uncovered, the women see that the troubles they all face are universal. One woman is connected to another. While you might be able to guess some of Almodovar's mysteries, it won't matter. The director teases them out with a sly hand, revealing everything at just the right time. 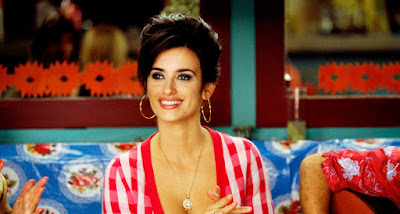 Penelope Cruz is remarkable in this film. The story goes that she was growing fed-up with thankless roles in mediocre Hollywood studio pictures, and she went back to Spain and to Almodovar and asked him to giver her something juicy. He wrote Volver for her, and she returned the favor by inhabiting his heroine with a forceful presence. As a mother forced into a position where she must protect her child, she is funny, sexy, and fierce, while also managing to stay vulnerable. Some of what she has to go through is emotionally scary, but Cruz firmly maintains Raimunda's strength. Her character earns the good things that happen to her, and Almodovar's ending is like a great gift to the audience, fading out on just the right note.

I'm not sure I've adequately summed up Volver. It's many things. It's both comedy and drama, and while not a mystery per se, there is some sleuthing that must be done to sort out the family history. And while, yes, it is a story about women, it is also the blossoming of one woman, of Raimunda, who finds that when put to the test, she has more to give than she realized. The title translates into English as To Return, and it has a greater meaning than just describing the return of the dead mother, it's also about a return to one's self, to a time before the secrets became secrets and changed everything. By letting the truth out, Raimunda can change it all back and become the person she always intended to be. 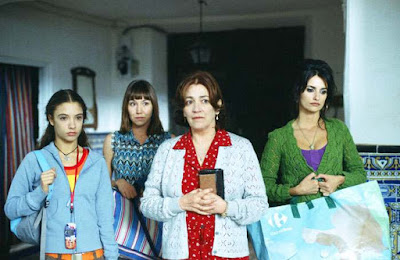