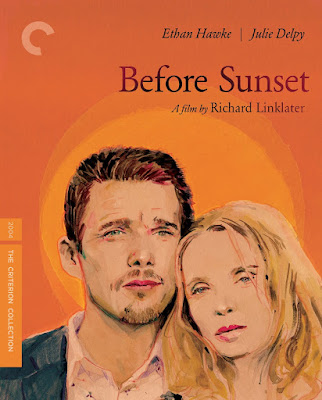 Confession: I didn’t see Before Sunset during its theatrical run, it was a couple of years before I finally gave in and checked it out. I had dismissed the notion of a sequel to Before Sunrise [review], being in my early 30s and still full of strange and precious ideals about story, I had rejected the idea that the magic could be recaptured or that we needed to know if Jesse and Celine ever saw each other again. It wasn’t until the graphic designer working on my graphic novel with Joëlle Jones, 12 Reasons Why I Love Her, gave me a DVD copy and insisted that I give it a try that I finally did. And was pleasantly surprised.

I mention this in part because how Jesse (still played by Ethan Hawke) answers the questions about the book he wrote fictionalizing the events of Before Sunrise sounds a lot like how I answer questions about my books. Specifically, the “did they or didn’t they” ending being a litmus test for how romantic you are. I give the same answer about the ending of 12 Reasons Why I Love Her. 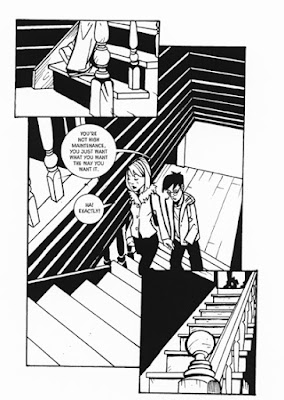 Clarification: I am re-watching each movie of the Before Trilogy and writing about it afterwards. Thus, when I wrote my Before Sunrise review, I had not yet watched Before Sunset, and so when I wrote that each moment of that movie was every moment of the series, I had no idea that Jesse says the same thing, also in the scene discussing his book, in this entry. What can I say, we share a wavelength.

And the Affair to Remember [review] comparison? Fitting that the reunion of Jesse and Celine echoes the “did you or didn’t you” of the final scenes of the Leo McCarey film, though with a much lighter touch...before moving on. In Affair it was the end; in Sunset, the start. 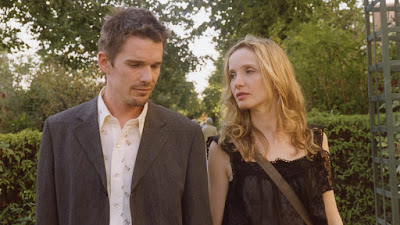 Before Sunset is the very definition of a middle part of a trilogy. It’s a bit darker, a bit more serious. It feels incomplete, acting as the connection between the kick-off and the finale. And like most second parts, many fans are going to argue that it’s the best. For all the reasons cited.

Richard Linklater gets this. He’s not setting out to make a crowd-pleasing affirmation of Before Sunrise’s goopier potentialities. Before Sunset has a level of sincerity about what it means to be in one’s 30s that underlines how sincere its predecessor was about capturing the airiness of being in your early 20s. They’ve had a whole life to live, to fail, to lose or hang onto their romantic notions. Amusingly, Jesse is more hopeful now, and Celine (Julie Delpy) is a politically driven realist. Where their paths diverged somehow caused him to increase his belief, and for her to tamp her romance down. Then again, he is also in an unhappy marriage, so maybe by being so grounded he can appreciate feelings that are less so. I mean, there is a definite irony to her being jaded by romance, when he suffered the true disappointment; yet, her failure to carry through has arrested her emotional development. She is not sure she can ever again feel the way she did during their Viennese dalliance.

Though, even as she points out, Jesse has arrested himself. He has chosen to stay in that moment, regardless of how much his life charges on. The impetus for their reunion in Before Sunset is that he has written a novel about their one night together, and the book tour has brought him to Paris. This adds a fun metatextual layer to the movie. They are fictional characters that, at least for a brief period of the movie, are grappling with fictional versions of themselves. More importantly, though, it brings up the question of perception: his version of events vs. hers. 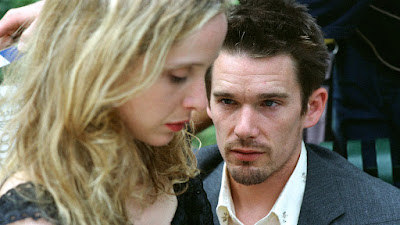 Or, perhaps more precisely, it questions the quality of a particular witness or narrator: how does their retelling of Before Sunrise change based on what they prefer to hide or celebrate. Of course, those alterations are based on what they feel and what they wish to suppress or keep secret--a tactic that spills over into how they represent their current life. Both begin with a desire to present their best face, forgetting that they are with the only person who is really capable of unmasking their pretenses. And they only have a couple of hours to get the job done. He has to leave for the airport at 7:30.

Fitting into the collegiate preoccupations both Jesse and Celine had in Before Sunrise, Before Sunset uses their ill-fated first reunion as a way to ponder questions of faith, the “what if” scenarios suggesting a different path for the wannabe lovers. Sure, they would have been different if they had seen it through, but not necessarily for the better. Is it possible that they needed to shed their youthful ideology in order to really be together? Would they have lasted if they had run with that first blush of emotion and not gathered the life experience that would give them the tools and tenacity to commit? Probably not. And thus, it is befitting that Before Sunset fails to end with a grand declaration, fading out instead on a quiet recommitment to love. 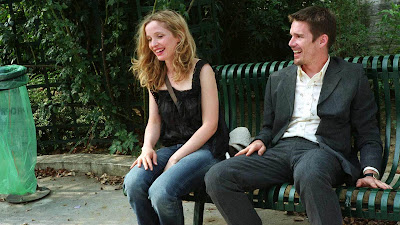 In terms of style and approach, not much has changed here, though it’s clear that budget and nearly a decade of work under their belts has improved all skills. The camerawork is cleaner, the look of the film more polished--but that could be an uptick in technology giving all indie filmmakers a leg up. Lee Daniel shot both movies, as he has many Linklater efforts, including Dazed and Confused [review 1, 2] and Boyhood [review], so I imagine the two had quite a rapport by this outing. Daniel also has a lot of documentary credits on his resume, which suggests certain skills he certainly could apply here.

Luckily, this progression helps rather than hurts. If the first film has the scruffiness of youth, this has the sheen of success, the characters showing off at a time when they can and when making sure everyone knows you’ve accomplished something matters. It can’t be the same every time...and as we’ll see, it won’t be. 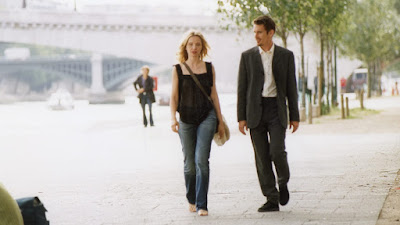