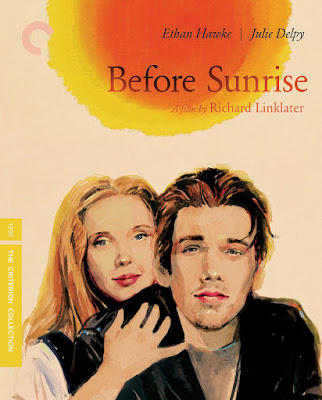 My first thought in rewatching Before Sunrise was to wonder if they had a plan all along. Back in 1995, were writers Richard Linklater and Kim Krizan already looking ahead to 2013, imagining their decades-spanning Before Trilogy, and laying tracks for the relationship to come? Because it’s hard not to flash forward to the third chapter when Jesse and Celine’s relationship is experiencing friction while watching how it originally came together. [Link to my original Before Midnight review; link to my 2018 re-review.]

It’s all right there in the first scene. Celine (Julie Delpy) is reading  book on the train, and a German couple arguing forces her to retreat to another empty seat on the car. This puts her across from Jesse (Ethan Hawke), a fellow reader and another solo traveler. The bickering gives them a reason to chat, and Celine shares a factoid about how when men and women grow older, they physically lose the ability to hear each other; Jesse then wonders if that’s how couples manage to stay together, evolving to a state where they contentedly tune each other out. The problems of the old become the meet-cute of the young. 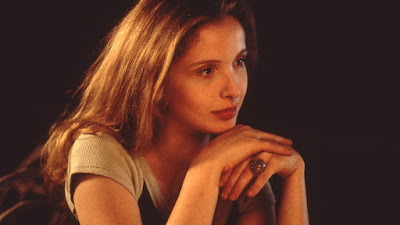 To examine this, to leap ahead in time, is to actually indulge in Jesse’s own winning argument for convincing Celine to leave the train: imagine yourself in twenty years, married with children, and you have no idea if one of those men you met but did not hook up with would have been more exciting than your boring, familiar husband. Jesse offers himself as the predictive answer, proposing that Celine see this excursion as a time travel experiment. And in a sense, this relationship will be timeless. Jesse and Celine are of this moment, and this moment is every moment, a time capsule that remains relevant even as it updates itself. This is version 1.0, and in nine years we will get 2.0, and nine more 3.0. Added layer for me: they meet on my birthday, so I probably feel the time more than any of you.

The future and mortality are running themes of the conversations in Before Sunrise--a movie that is, conceptually, one long chat, as the two young lovers stroll Vienna and get to know one another, the audience falling for the pair as they fall for one another. These morbid thoughts aren’t really surprising. Is there any stage of life where one feels a more pronounced obsession with death than in one’s youth? Is that not the whole point of Romantic poetry? One of the best things about Before Sunrise is how unashamedly young it is, how Linklater and Krizan lean into the grand ideas that possess a growing mind, no matter how silly or pretentious they may be. Thus we can forgive Jesse for his self-regard, surface-level “big” thinking, and sheer punchableness, his gray T-shirt and leather jacket, his grunge goatee. It was the early ’90s, after all. He looks like a version of Chris Cornell if Chris Cornell were a glass of milk that someone put ice cubes in and the ice had melted.

This paragraph is a placeholder/palate cleanser because I’m pretty proud of that image and I want you to take a second to really imagine it. 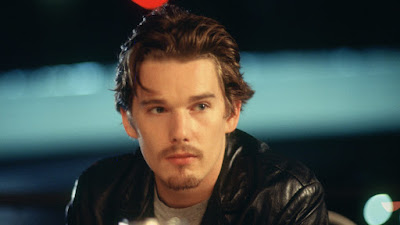 There’s a beauty to the writing here in how perfectly imperfect these two are for one another. The script could have simply relied on the cliché division between Europeans and Americans, that she is more sophisticated and worldly and he’s an accidental tourist waiting to happen; instead, it goes deeper into that divide to look at their personalities. Despite her fatalism, Celine is open to the world, ready to accept the proclamations of a grisly palm reader or the improvised street poetry of a homeless Lord Byron; Jesse is the know-it-all American male, too aware of the angles to enjoy the shape of them. It’s what leads to their only real conflict. Yet, we may also surmise that it’s no conflict at all, that he likes her daffy indulgences, and she appreciates how he preens for her. She’s smart enough to see that he needs to be seen as smart himself, confident enough to call him stupid, and enough of a romantic herself to take the compliment. One of the best scenes is watching her bust his ego by making fun of their first kiss. Credit to Hawke, he seems to get this guy, because he quickly turns the bruised feelings into self-aware laughter. 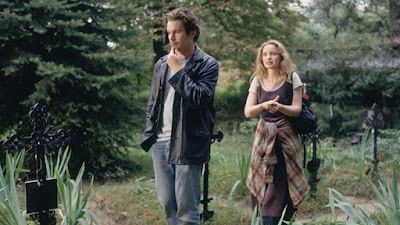 Both performances here are easygoing, natural, and unaffected--perfectly in sync with the ultra-indie shooting style (nothing fancy here, just the actors, the camera, and the city). Hawke is more prone to acting, including demonstrative hand gestures and fidgety business, but it fits how Jesse himself is performing. On her side of things, Celine is more laid back, perhaps less invested, but again, that fits her personality. She’s open to whatever happens, he’s intent on making it happen.

It’s a charming little dance, staying just on the right side of mawkish for most of the narrative to allow for the filmmakers to go whole hog at the end, stamping Before Sunrise with an Affair to Remember-style ending, where a promise is made to prove this is more than a one-night stand by returning to the spot where they parted in six months time.

Only for us it would it would be considerably longer than that before we’d find out if that promise remained unbroken. 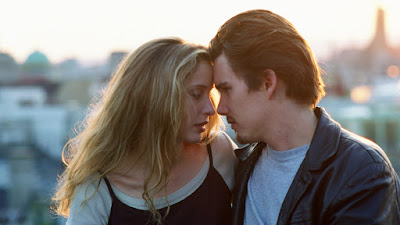