In honor of Filmstruck and TCM naming Leslie Caron the Star of the Week, I'm de-archiving some old reviews. Original source from 2008. 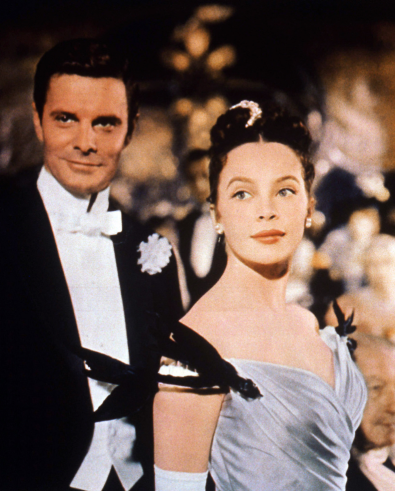 Six years after An American in Paris [review], the Arthur Freed crew at MGM had perfected their special touch for making movie musicals. Returning to the scene of that spectacular success, Freed and director Vincente Minnelli turned to the Colette novella Gigi to give us another Paris-based film about an older gentleman falling for a bewitching French ingénue, once again played by Leslie Caron. The final product is not as special as the Academy Award-winning Gene Kelly vehicle, but it's good, light-hearted fun, and Gigi carried off a bevy of statues of its own on Oscar night, including the top prize.

Caron's Gigi is a fun-loving, nineteen-year-old girl who lives with her grandmother (Hermione Gingold, The Music Man) and remains blissfully unaware of the maddening social conventions of love affairs in Parisian society. She will eventually turn the head of her rich cousin Gaston (Louis Jourdan, Letter from an Unknown Woman), who is bored with the same old society dames and the games they play. After a disastrous affair with a dramatic paramour (Eva Gabor, Green Acres), Gaston becomes a scandalous figure in gossip circles, and though his skirt-chasing uncle Honoré Lachaille (Maurice Chevalier, The Love Parade [review]) tries to guide him through the treacherous waters of lovemaking, the women around Gigi have different ideas in mind. They look at Gigi and Gaston and see a perfect match. 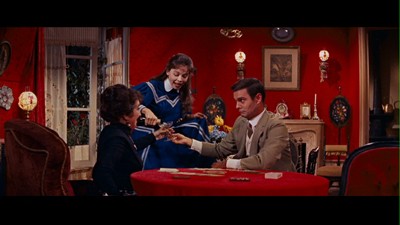 Gigi is a visual sensation full of gorgeous things to look at. Vincente Minnelli shot much of Gigi on location in Paris, and we see the signature style of the city represented by its architecture and interior design. The fabulous Cecil Beaton designed all the costumes and also decorated the scenery to give Gigi a turn-of-the-century glamour that both captures the feeling of the Parisian spirit but also gives it his unique look, much like he did for London in My Fair Lady [review]. Preston Ames, the art director for An American in Paris, also joins with Beaton to bring Paris to life for the screen. The costumes are colorful and grand, and there are some breathtaking vistas, including gorgeously painted skies. Just take a gander at the horizon when Maurice Chevalier and Hermione Gingold meet by the sea, framed by a purple colored sky that slowly turns red the deeper the couple drifts into memory. Never mind that the cutaways to Caron and Jourdan on the beach show blue skies and sunshine! What's it matter when the mood of the evening shot is perfect for the reminiscence of two former lovers?

During that seaside scene, Chevalier and Gingold perform "I Remember it Well," a marvelous comedic number with music by Frederick Loewe and lyrics by Alan Jay Lerner. It's one of several songs from Gigi that have since become standards. The most famous of these would have to be "Thank Heaven for Little Girls," performed by Maurice Chevalier at the start of the picture as he walks in the park amongst the many lovers who congregate there, some of them openly and some in secret. 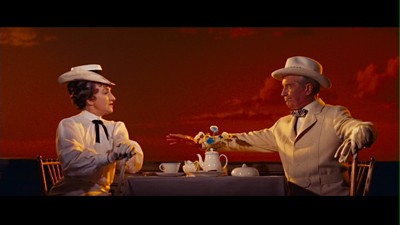 Chevalier also has one of the best numbers when he gets to sing "I'm Glad I'm Not Young Anymore," addressing the audience directly as he compares the perils of youth and romance to the comfort of old age. In both of these scenes, Chevalier's character establishes one of the central conflicts in Gigi: the rift between the people who will not marry and the people who do not. Chevalier will not marry, whereas Gigi's Grandmother and Aunt (Isabel Jeans) have not. As Aunt Alicia says, some marry at once, some marry at last. The older women fear Gigi will suffer the same fate (Grandmother was once jilted by Honore), and that's why they are so determined to groom her for Gaston. But is it too much too soon? Can she handle the bonds of commitment? Will Gaston get over being a bachelor and accept these changes of Gigi's?

To be honest, it's when answering these questions that Gigi loses me a little. The character motivations in the final act seem muddled to me. Both Gigi's anxiety and Gaston's indecisiveness I guess could be good enough explanation for how quickly they change their minds back and forth, but when it counts, we are not privy to their internal processes. In particular, the very last scenes seem a bit rushed, with Gaston acting impulsively and leaving one with a feeling of narrowly avoiding a pile-up rather than the warm fuzziness that should come from the rush of love. The cynic in me thinks the script was bent in ways it shouldn't have gone in order to placate censors and drive home the idea that fidelity is better than tomcatting around.

Still, for a fluffy musical, Gigi is damn entertaining, with fine performances--particularly the always charming Chevalier--and memorable songs. The look of the picture is so drool worthy, you hardly have time to worry over the story, anyway. Plus, I think for the die-hard fans of musicals, a film is judged by how much it gets the toe tapping rather than the completeness of its plot, so it's likely a moot point in that regard. Sometimes you just have to pop the cork on the champagne, drink up, and let guys like me worry about the vintage. One can either sit at a computer and type, or one can enjoy the bubbles and the heady elation that comes with them, and Gigi has more than enough bubbles to go around. 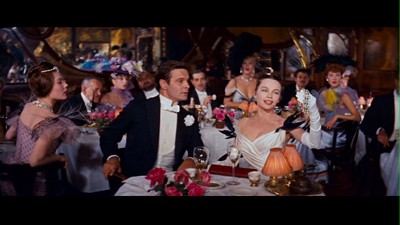