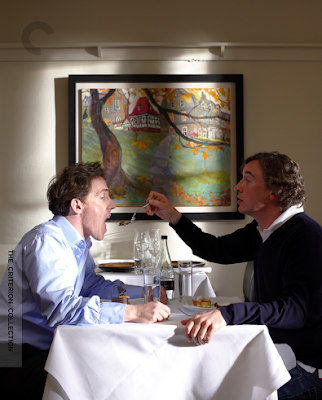 The Trip is a free-wheeling new comedy from director Michael Winterbottom and his regular collaborator, performer Steve Coogan. (The pair previously worked together on 24 Hour Party People and Tristram Shandy: A Cock and Bull Story [review]). In this, the pair send up travel shows, putting Coogan and his acting buddy Rob Brydon (both playing themselves) on a tour through Northern England, where they spend a week sampling buzzed-about restaurants, seeing the sights, and in Steve's case, bedding random women. Amidst this, Brydon goes through being home sick and Steve wrestles with a flailing film career, a failing relationship, and his distant son partying too hard.

Originally made as a BBC television series, The Trip has been edited down to a sharp feature film, tracking the journey and the ups and downs of the two performers' friendship. Shot in a documentary style, as is often Winterbottom's trademark, the largely improvised comedy is given sense of purpose by the vacation's mission, but the real reason you'll end up watching it is the camaraderie and competition between the two leads. From the get-go, the dichotomy between the family man and the playboy is obvious, but the irony is that for as settled down as he otherwise is, Rob is the more fun and Steve has a bit of a stick up his butt. At their first stop, Rob launches into his impressions of Al Pacino, Sean Connery, Michael Caine, and others, setting up an ongoing gag where Coogan feigns irritation but continually jumps in, if only to school his pal on what he thinks is a better imitation. Both are good mimics, and they riff back and forth, trying out 007 lines and in one hysterical scene, the speech of a war captain to his troops the night before the big battle. The pair also occasionally belt out joint renditions of ABBA's "The Winner Takes It All." 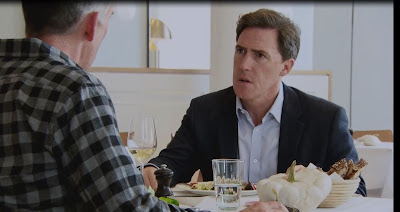 While this might sound like a rather slender line to hang an entire movie on, it's a surprisingly effective way to replicate what it's like to be on a real road trip with someone you know very well. The shared jokes become an escape when being trapped inside an auto makes the boys go stir crazy, and the manner in which they bandy back and forth ends up revealing their insecurities in unexpected ways. The team doesn't even take the obvious route, either, in having both men envy one another. Nope, it's just Steve that envies Rob. He wants the security that Rob gets from family and the comfort of modest success. Coogan may be more famous, but he's always chasing something. Even in his dreams, he is haunted by conversations with agents and belligerent fans. (The Trip doesn't maintain a strict documentary style; we not only see these dreams but also the opposite ends of phone conversations, including Coogan's real-life agents (or the actors playing them) and his estranged girlfriend (Margo Stilley) in America.)

Some of the stops on the map are interchangeable, but Winterbottom revels in the particular details of each one. He and cinematographer Ben Smithard take the camera back into the kitchen to see the food prepared. Some of the dishes are ludicrous, constructed to look like mini art installations. They also occasionally pan to capture other diners, and by making Coogan go outside to get cell reception--and further and further away from the hotel the deeper they get into the trip--they get a chance to shoot the countryside. Tristram Shandy fans might also appreciate that once again Winterbottom pairs Coogan with a significant literary legacy--a visit to Samuel Taylor Coleridge's home brings up interesting parallels between the dead poet and the living actor.

The Trip is a film that's appeal is so delicate and ephemeral, it's kind of hard to describe without totally deflating the tires. It's not a conventional comedy, by any means, nor is it as unfocused as, say, a home movie. It's carried more by personality than plot, and as a result, it could seem slight if you aren't willing to get into The Trip's particular groove. I found it to be fascinating and fun, thoughtful in spaces, punctuated by big laughs in others. As with any trip, you will eventually experience an eagerness to get home, and that homecoming is also a little bittersweet; what makes it so good is the feeling that you have gone along with something, that you've been a part of the experiment. It reminds me a lot of the fantastic Ewan McGregor/Charlie Boorman TV show from a couple of years ago, Long Way Round, when the old friends traveled across Europe on motorcycles and grew even closer through the shared time together. Except here, Coogan and Brydon dig under the skin a little more, finding comedy in their own foibles. It's really quite moving, and certainly more entertaining than most of the family summer vacations I took as a child, making The Trip an essential cinematic destination of the season. 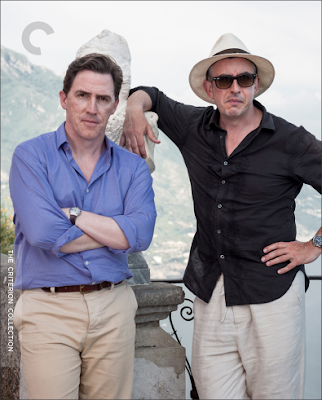 There's a joke in The Trip to Italy where Steve Coogan teases his friend Rob Brydon about being an acquired taste. Rob has just had an extramarital dalliance on the Italian coast, the sort of thing Steve is usually the one to engage in, and so Steve zings Rob by telling him it was only a matter of time, someone would develop the craving eventually. Though not intended as a meta joke about the Trip series, it could just as easily nestle next to the Godfather [review] comparisons or the thinly veiled jibes about the reality of true-life fiction. If you liked the original The Trip, then you know what the flavor is and you're going to enjoy the follow-up in equal measure, if not more. If you haven't tried either installment yet, it shouldn't take you long to know if they're the kind of thing you'll want to partake of again and again.

As with the 2011 original, Rob and Steve, playing themselves, go on the road in search of good food and the best Michael Caine impression. Behind the camera is Michael Winterbottom (The Killer Inside Me [review], Trishna [review]), who is also credited as writer, but one would gather that there is as much improvisation between the two friends as there is scripted dialogue. Over the course of a week, the fellows travel from place to place, bickering and taking potshots at one another, sample some food, and get into trouble. Rob does endless impressions, some of them good and some of them ludicrous. Steve looks fatigued. They are joined by friends and relatives. And then the journey is over. 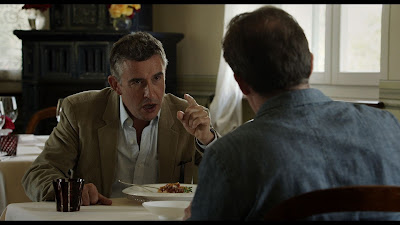 The transplant to Italy has not made this Trip any less amusing, but Witerbottom takes full advantage of the country's cinematic history. There are references to several famous films set in Italy, with an emphasis on those with bittersweet and unhappy endings, including Roman Holiday [review] and Godard's Contempt [review]. There is also mention of Roberto Rossellini's Voyage to Italy [review], a classic of Italian Neorealism, an aesthetic that Winterbottom has borrowed from heavily in his career and a tradition to which The Trip to Italy owes much of its approach. It seems that it's in ode to this--as well as to the romantic poets whose own travels Rob wants to shadow--that a little melancholy creeps in. Both men spend much of their adventure trying to connect with loved ones back home and pondering just what it's all for.

It's been about three years since I saw The Trip so I don't recall for sure, but I don't believe it ended on as down a note as the sequel. My early impression, though, is that the added sadness allows The Trip to Italy to be a far richer experience. I probably laughed less but I felt more. Steve Coogan takes more of a back seat in the early portion of the movie, it's almost as if we are watching him warm up, but it makes sense for the opposing trajectories he and Rob are taking. Both men are feeling their age, but one seems to be figuring something out while the other is struggling with a newfound confusion.

Which isn't to suggest you're going to leave The Trip to Italy bummed out. Quite the contrary. As Brydon insists during one of his riffs, he is an affable presence, and despite being the grumpy gus, Coogan is pretty enjoyable to be around, too. As with the first film, and with any vacation you might actually take, some places are more fun than others, and sometimes you like your companion more than you do at other times, but that's part of the shared experience. You laugh, you hurt, and you see the sights--sometimes all at the same moment. 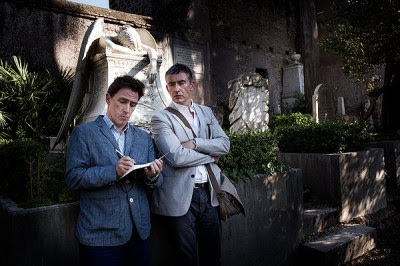