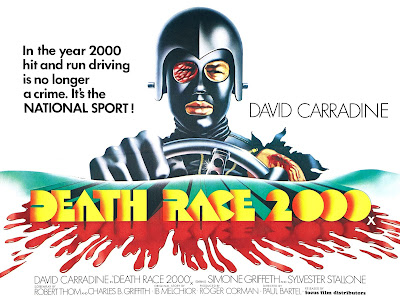 Hey, what gives, Paul Bartel? The year 2000 you show in your movie Death Race 2000 is nothing like the turn of the century I lived through.

Or maybe it’s a little like it. Reality television competitions, a worship of celebrity--these things were very much in vogue. And we were just a year away from the tyrannical reign of The Fast and theFurious. So, Bartel’s broad satire about a cross-country race where trumped-up celebs mow down unsuspecting pedestrians maybe wasn’t that far off the mark.

Death Race 2000 stars David Carradine, fresh off of TV’s Kung-Fu, as Frankenstein, the leather-clad, mysterious, dark hero of the government-sanctioned race. Purported to be sporting robotic limbs after losing arms and legs from crashes in years previous--and covering the scars of the same--he is the rebellious antihero inspiring imitators and groupies. His main competition is Machine Gun Joe Viterbo (pronounced like “Turbo”), a throwback East Coast gangster-type, played by a young Sylvester Stallone. They are two of five racers, with the other major players being the lusty cowgirl Calamity Jane (Mary Woronov, also in Bartel’s Eating Raoul [review]) and the Nazi temptress Matilda the Hun (Roberta Collins). Each driver has a tricked-out car and a navigator riding alongside them. That the co-pilots are all members of the opposite sex means these companions will do more than navigate. 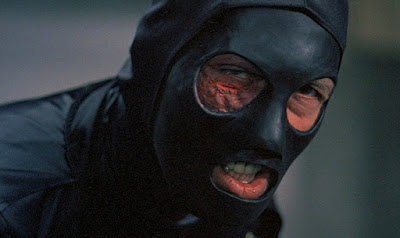 A B-movie from Roger Corman’s infamous low-budget studio, it was prerequisite that Death Race 2000 would have plenty of sex and violence--though the latter is of the cartoonish, “red paint” variety. Yet, like most enduring exploitation pictures, there is more going on around the race than the simplified premise would suggest. Based on a short story by Ib Melchior (Robinson Crusoe on Mars [review]), the screenplay by Charles Griffith (The Little Shop of Horrors) and Robert Thom (Bloody Mama) frames the race as a televised event, complete with colorful commentary from disc jockey Real Don Steele and gossip-mongering reporters. It also cuts away from the action to show a counterrevolutionary movement looking to shut the race down. Their beef is that the government, run by the generic Mr. President (Sandy McCallum), is using the bloody shenanigans to distract from starvation and oppression. Think The Hunger Games [review] on wheels.

Death Race 2000 is entertaining and schlocky in all the right ways, though it’s lost some of its sexiness over time. I am not sure if it’s the fact that critiques of the vapidity and prurience of some pop culture has become so prevalent that Death Race 2000 no longer feels necessary or special, or that Bartel works with such a broad hand that the satire wasn’t that sharp to begin with, but the critical aspects of Death Race 2000 don’t carry much force all these years on. It seems a little too aligned with the thing it means to lampoon. The fun of watching Death Race 2000 is reveling in the comical deaths and dirty play. And it’s hard to pretend to be above celebrity culture while enjoying a hammy Stallone eating clam sauce with his fingers. We only care because he’s Sylvester Stallone, his reputation precedes him. It’s hard to say how famous this movie would still be with any other personality in the part. (Carradine fares better, delivering his usual ice-cold intensity.) 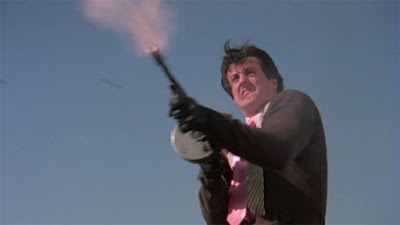 Luckily, the film is mercifully short, and perhaps Bartel’s smartest move is not striving for a greater point that his shoestring budget might not have allowed for. I haven’t seen any of the remakes or sequels, but something tells me they probably get it a lot more wrong than the original; Death Race 2000 is at least a quaint relic with a few visceral pleasures. 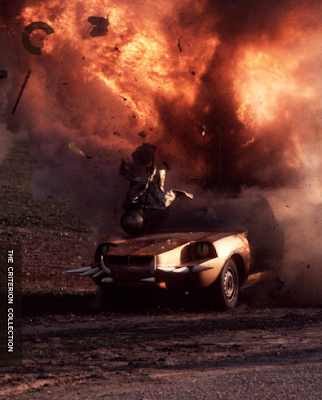