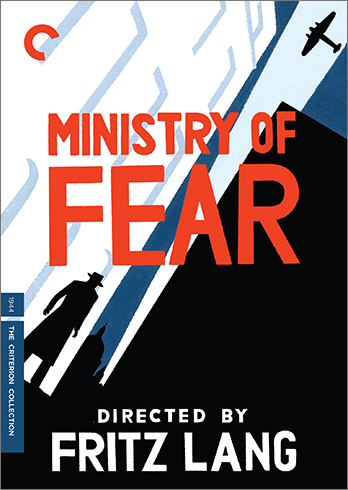 A wartime propaganda thriller, Ministry of Fear has paranoia to spare, but surprisingly little tension. Based on a novel by Graham Greene (The Third Man [review]) and directed by Fritz Lang (M [review]), the film certainly has an impressive pedigree, but what ended up on the screen, though entertaining, feels both half-hearted and half-baked.

Ray Milland (The Uninvited [review]) stars in the 1944 war picture as Stephen. When Ministry of Fear begins, he is being released from an asylum in the Middle of Nowhere, England, after having served two years of a sentence for an unknown crime--to be revealed later, I won't spoil it here, but needless to say when the truth outs, he's sympathetic. Stephen is eager to get back amongst regular people. On the way to the train station to grab the next express to London, he stumbles on a local fair raising money for charity. Naturally, he joins in the festivities, including going to a fortuneteller. Inadvertently, Stephen delivers the right code words to the soothsayer, and she gives him the correct answer to win a cake at a neighboring stall. A special cake intended for a Nazi spy. Oopsie! 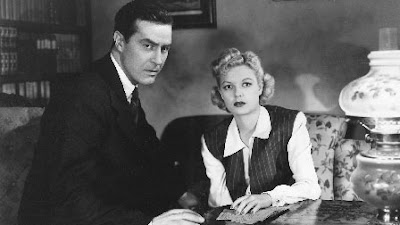 It's a scenario worthy of Hitchcock. The wrong man in the wrong place being hunted by all kinds of wrong people. Though he fears trouble--a second crime on his record will likely put him in jail--Stephen keeps his head and starts following the clues. It's a familiar plot style: each new revelation obscures the last and points the way to the next. There’s a love interest (Marjorie Reynolds), and a femme fatale (Hillary Brooke), and eventually a surprisingly understanding cop. (Percy Waram). The fate of England was baked into that cake. Stephen and his American accent will do it for the crown! 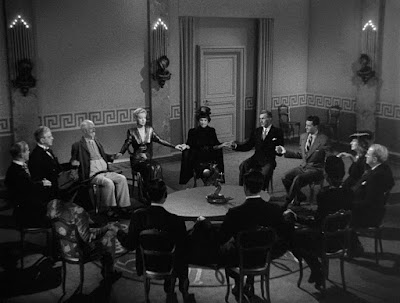 Ministry of Fear is often classified as a film noir, but I'd argue that's not really the case. Stephen lacks the cynicism of the typical noir hero (the whole movie does really), and though being one of the masters of the genre, Lang employs none of its aesthetics. Ministry of Fear's visual style is shockingly mundane. The scenes are brightly lit and staged from a locked position in the middle of the room. Good noir angles its darkness toward creating dread; Ministry of Fear seems designed to calm a concerned citizenry and make it feel safe. Likewise, the narrative never develops any urgency, and even Stephen seems to just be taking his time, things will work out. A complaint apparently echoed in Lang’s assessment of the script by Seton I. Miller (Here Comes Mr. Jordan [review]); he felt they had defanged Greene’s novel. So perhaps the director only gave the absolute minimum, thinking that’s all the production deserved. 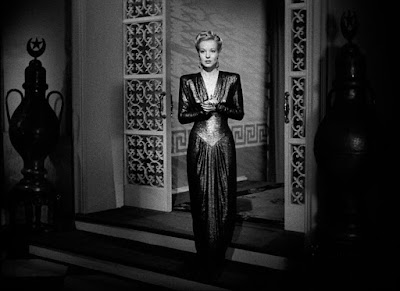 Setting that aside, the movie is fine for what it is: a solid B picture made to run second on a bill. Milland is fine, if bland, the kind of square-jawed yankee in vogue at the time. Hillary Brooke proves alluring, and her séance is Ministry’s best scene (and features an under utilized Dan Duryea as the heavy), rivaled only by her exchange with Milland when she exposes her whole con. A sexual spark passes between them as they simultaneously put all their cards on the table and try to guess each other’s next gambit. There’s a chemistry between the performers, and character in their performance, that is lacking in most of the other players. The notable exception being Percy Waram's police inspector--he is a canny investigator, willing to go along and watch to see if Stephen will take the rope and hang himself--but he shows up way too late to salvage things. Where was he in that whole first hour? Waram could have easily been spun off into his own series. Maybe to find all the plot holes and explain why Ministry of Fear characters keep disappearing and reappearing with little explanation.

But again, it's all fine. Ministry of Fear is lighter Lang, and should simply be taken for what it is--a well-meaning escape and reassurance for audiences living through World War II. As a historical artifact, it does the job, just don't expect it to go above and beyond. 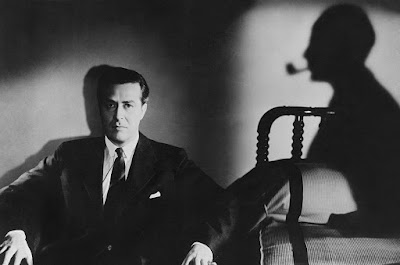