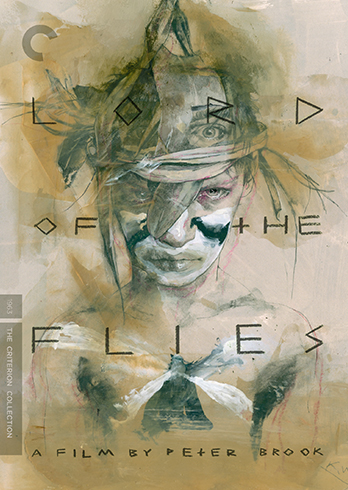 William Golding’s Lord of the Flies was one of those school-assigned books that resonated with quite a lot of students back when I was in high school, and I’d wager still holds its power with plenty today. The story of a group of boys stranded on an island after a plane crash and left to their own devices was strangely identifiable. Golding didn’t hold back on making the kids real, and he transferred the usual social order into a harsh environment and let it play out, no punches pulled. I would guess just about every kid (or at least every boy) reading it imagined who they might be in such a scenario. Would you be the sensible leader, Ralph? The egomaniac Jack, who lures the other boys down the wrong path toward savagery? Or worse, would you be the put-upon Piggy, or perhaps worst of all, one of the nameless kids who just goes along? 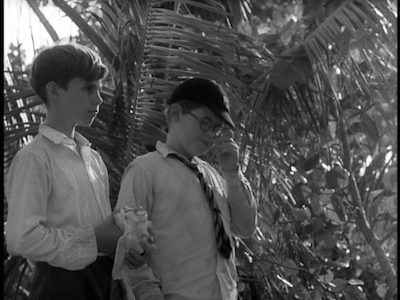 I remember much debate about The Hunger Games when the books became a hit, people fearing Hollywood would never make the movie versions because it was too scared to show young people killing each other. And then when the first one came out [review], some audience members still complained it wasn’t violent enough. (I reviewed part II, as well [here].) My guess is similar equivocations occurred when it came to trying to adapt Lord of the Flies. It took nine years for the 1954 novel to make it to the screen, helmed by theatre-director Peter Brook. That the essential nature of the book survived, even without overly explicit violence, is a pretty impressive thing. Watching it again, and having not read the novel since probably the early 1990s, I was amazed not only by how sharp it still was, but how it also still hits the big moments, the stuff that sticks with you. The plot remains unchanged: the kids end up on the island, and at first huddle into a single tribe, only to become more fractured as society becomes a distant memory. The levelheaded Ralph (James Aubrey) is the first to organize the group. It’s his blowing on a conch shell, urged on by the nerdy Piggy (Hugh Edwards), that brings the scattered children to the same beach. He is voted chief of the tribe over his immediate rival, Jack (Tom Chapin), the alpha male from the religious school. Jack counters by mobilizing his choir group to be the tribe’s hunters, setting him up as the hawk to Ralph’s dove. In Jack, we catch a glimpse of British colonialism: he believes Brits are the natural rulers of the world and should take what they desire. (Toxic white male prototype.) 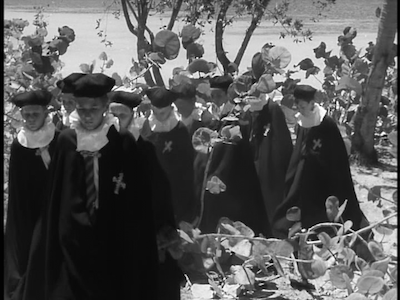 This dynamic can only go one way, with Jack moving for power and getting more of it the longer they are marooned. As the kids grow hungrier and more scared, they are ready for a leader that will show a strong arm, no matter how wrong. When a downed fighter pilot in his flight suit is discovered on a rocky peak, he becomes a bogeyman to foment unrest. Jack takes his hunters and splits for higher ground, eventually offering a spot amongst their second tribe--and compelling some by force--to those who initially chose to stay with Ralph. They succumb to primal living, glorifying in the hunt, eventually indulging in murder. Representing the worst of human nature is Roger (Roger Elwin), one of Jack’s fiercest hunters, and the one who eventually embraces killing to such a degree, he murders his own kind. 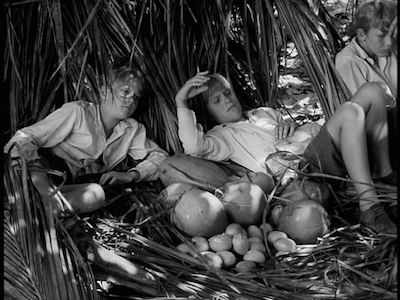 Brook keeps it simple throughout Lord of the Flies. The natural scenario is a limited one--there is no technology, tool making is rudimental, conversation is limited by age and education--and so the best approach is for Brook to immerse himself in the environment, much like the boys themselves. In the film’s most striking and poetic sequence, Jack’s followers erupt in a bloodthirsty frenzy. Brook makes the camera their target, so that the little savages are consistently rushing the viewer, placing us in the position of prey. The eventual violence is thus not seen directly, but Brook shows the consequences: a body floating out to sea. 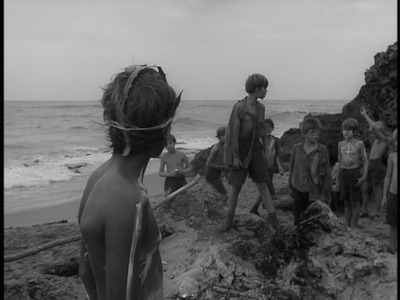 The director, who edited the film alongside two others, gets through the most difficult material in a similar manner. It’s all about suggestion. A quick cut, showing the center of the moment, but not the final strike, is evocative for how it inspires the audience to imagine the incident for themselves. A synecdoche of slaps.

This Lord of the Flies also works because of how the filmmakers isolate the experience, creating a world entirely unto itself. The initial plot set-up--the boys being sent away to protect them from war, the plane crash--is shown only during the credits and as a series of stills, a la Chris Marker. The effect is to make the homeland a kind of imagined location, as if that part of Lord of the Flies is the story, the myth, and the island is the only reality. It undercuts our own potential nostalgia for the life the boys might have left behind. In fact, outside of Piggy banging on about his aunt, these castaways don’t talk about home much at all, it might as well have been erased in a nuclear armageddon. It’s become so unreal, the appearance of the pilot, an adult human, is seen as a monster, as death himself. At movie’s end, when more adults arrive-- sailors in pristine white uniforms , seen, never heard--the judgment is instant. Civilization will reclaim the children, and there will be consequences. 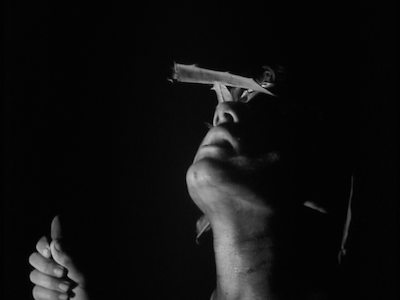 It would be a mistake, howerer, to imagine the behavior we see as occurring because the participants are young kids; Golding and Brook are looking to use the school boys as an abstract to demonstrate how men would act if we remove comfort and convenience. Survival is a selfish endeavor, and only the social contract prevents us from grabbing what’s “ours.” Yet, were this to be a movie about adults losing their shit (think The Beach or Apocalypse Now), it would have a totally different effect. We would not indulge the grown men the way we do the boys. Lines between hero and villain would be more clearly drawn. As real as Brook makes it, his carving out this separate reality allows us to give it more credence, to accept Lord of the Flies as a brutal fable, and leave much of our own preconceptions to the side.

Quick note: the package art for the 2013 Criterion edition of Lord of the Flies is by the exceptional Kent Williams. Kent was a pioneer of painted comic books in the late 1980s, including the chilling vampire comic Blood: A Tale. He doesn’t do comics all that much anymore, but he continues to paint, and if you don’t know his work, seek him out and change that. 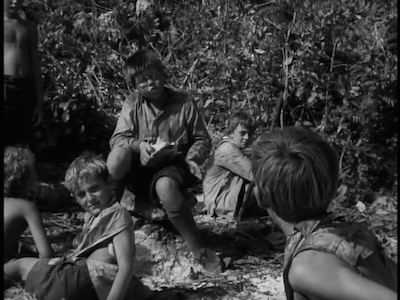 Note: The screengrabs here were taken from the 1999 Criterion standard-definition DVD and not the Blu-ray.