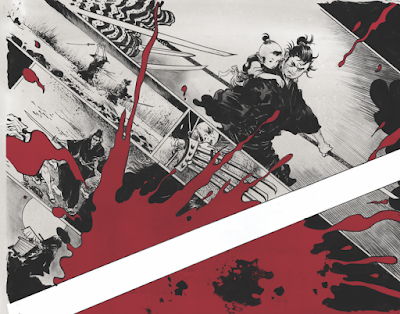 Returning to the Lone Wolf and Cub series after a couple of idle months, I am pleased to discover that even with its initial pleasures a distant memory, fossilized in my back brain, its delights remain no less surprising, thrilling, or stupefying.

Carrying on with its own individual story, while also letting a few bare threads from the larger plot of Itto Ogami’s feud with the Yagyu drag behind, 1972’s third release, Lone Wolf and Cub: Baby Cartto Hades, continues to escalate the Lone Wolf myth while also creating a more structurally sophisticated individual story. Each piece of the plot builds on the whole, a circular puzzle that will come back around. The ronin Kanbei (Go Kato) that father and child (still Tomisaburo Wakayama and Akihiro Tomikawa) meet on the road, whom Ogami spares in a duel out of respect for the swordsman’s adherence to the Bushido, has the least surprising return in the third act, and yet the encounter deepens our understanding of the Lone Wolf’s journey. 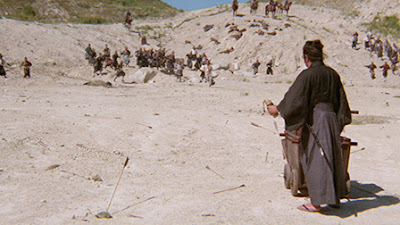 Baby Cart to Hades is more than a confrontation between these two men, however, but a blossoming of the larger, interconnected world of the samurai, erasing the lines between the underworld and the supposedly more ethical mainstream. When Ogami stumbles on Kanbei, it’s immediately following the younger man is cleaning up after his traveling companions commit a sexual assault; shortly after, Ogami protects a young girl who killed the slaver selling her into prostitution, recognizing in her a similar grief to his own. And yet it’s another sexual assault that partially motivates her would-be madam (Yuko Hama), to offer Ogami the opportunity to earn her freedom by sending him after a man who harmed her sister and father. When that despicable individual (Isao Yamagata) tries to hire Ogami in turn, not realizing why the killer has arrived in his township, the house of cards is revealed.

Director Kenji Misumi continues to push the violence to new heights of gonzo dizziness. He pits his swordsman against gunslingers and ninjas, creating a whirlwind of flailing limbs and splattering blood. He often removes Ogami from any grounded context entirely, cutting to him leaping through the air, his body framed by an empty sky, hitting impossible altitudes. By the time of the outlandish pre-climax, when Ogami takes on a whole battalion, we are prepared to accept anything, down to our man either counting bullets or just not caring enough if he lives or die to worry about his opponent’s ammo. Yet, it’s still the one-on-one of Ogami vs. Kanbei that closes things out, and the two men ponder what it means to be a true warrior: “living by death.” 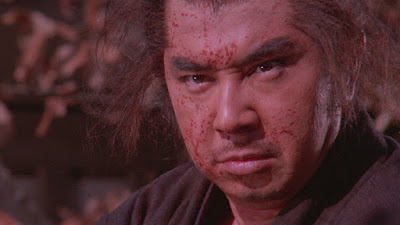 It’s perhaps what separates them from the Cub, from Daigoro, who provides the only real compassion in the series. He takes pity on the kidnapped girl not once, but twice, only to have his heart broken when she leaves them. Did she seem a suitable surrogate mother for the boy? Contrast that with Hama’s madam, who like the prostitute in one of the earlier entries is willing to toss it all away, seduced as she is by Ogami’s animal nature. There walks a true man, a moral being in an increasingly immoral world.

Interesting to note briefly how Misumi and writer Kazuo Koike build extra backstory into Baby Cart to Hades, adding flashbacks to other events in Ogami’s journey as if they were call backs to films we already saw. Even visually, Misumi separates them, adding a sepia tone and dialing down the audio, letting the Lone Wolf and Cub beef up its history as it carries forward.

And forward it will go, the journey never ending, only one outcome possible...though still three more films to go. 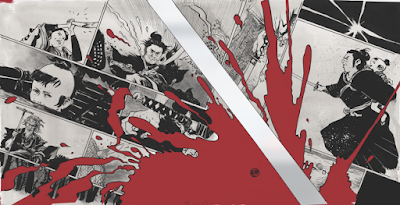