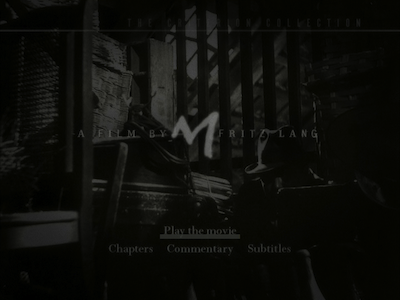 I don't know if Fritz Lang's M would be considered the first police "procedural" in cinema, but the 1931 motion picture is certainly very close to it. Having seen the film multiple times now--and this go-around actually seeing it in a theater for the first time, as I caught a screening of the new 2K digital restoration put together by the Munich Film Archive--M is one I've gotten to know fairly well but that still manages to surprise me each and every time I see it. Since first discovering M as a teenager, I usually focused on the almost surreal, Brechtian depiction of Germany's criminal underworld, culminating in the trial sequence where the crooks judge the murderer. Seeing it this time, I was struck by how methodical Lang and his wife and screenwriter, Thea von Harbou, are in arranging the different elements of the story, following the case step by step toward its conclusion.

M opens on a city in distress. Someone is kidnapping and killing children. The situation has already passed into popular culture, as evinced by the little girls singing jump rope songs about the murderer. He is a bogeyman, one notch to the right of an urban legend. This specter of death is also, at that moment, on the prowl. Peter Lorre stars as the disturbed killer, Han Beckert, delivering a performance that is chillingly calculated. Beckert is an icy personality with a chameleon's talent for fitting in. He is kind and warm to the little girls whom he bribes with candy and balloons, cocky when writing letters to newspapers about his actions, but cowardly when consequence comes knocking. 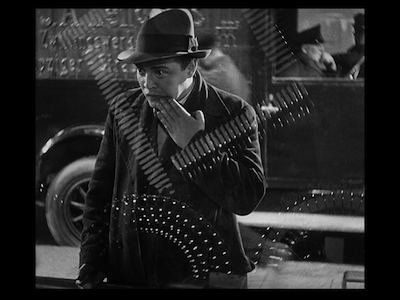 Early portions of the film follow the police as they chase down leads looking for the killer. We glimpse into private meetings, back room preparations, and the investigative labs, with Lang showing us how the detectives, experts, and technicians process the evidence and build the case. When the clues yield few results, the cops hit the streets and start putting the boot into the criminal class. The homicide bureau is led by Lang-regular Otto Wernicke, who plays the recurring character Inspector Lohmann, a fearsome and corpulent scourge of shady practices and their practitioners. Lohmann's raids on speakeasies and other criminal hangouts begins to put a damper on the various illegal businesses, so the top crooks put their heads together and vow to capture the child killer themselves. The various criminal divisions are con men, pickpockets, and burglars, with the top of the food chain being a dangerous individual referred to only as "Safecracker." Actor Fritz Odemar strikes an imposing figure. He is easily the most stylish of the bad guys, swaggering in his leather trench, bowler, and cane. 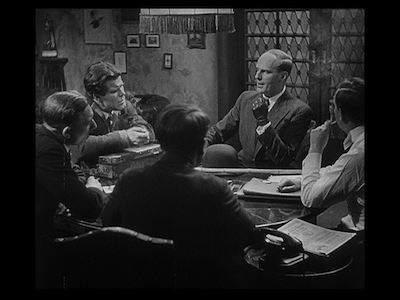 The crooks employ the Beggars Union as their street team. The theory is that panhandlers regularly go unnoticed. The case is cracked when a blind balloon salesman (Georg John) hears Beckert whistling Edvard Grieg's "In the Halls of the Mountain King" and recalls hearing a customer whistle the same melody on the day the last little girl was killed. The beggars spring into action, marking Beckert with a chalk "M" on his coat and following him street to street before cornering him after hours in an office building. The jig is up! 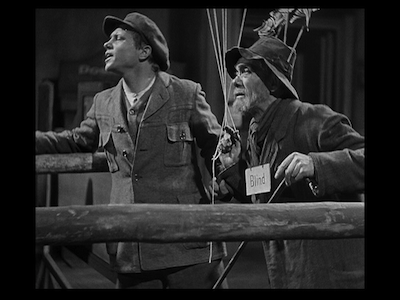 Lang spends sufficient time with each aspect of the story, letting every character have his or her due, fully developing cop and criminal alike as their investigations run parallel to one another. What is perhaps most revolutionary and daring for the era, however, is how much screen time the director gives to the killer. While we are spared seeing any of the bloody details of Beckert's deeds, we are privy to his behavior after he satiates his bloodlust and how the compulsion next takes over him. Lorre is well known for his buggy eyes and reptilian voice. He is chubbier here than he would be for his more famous Hollywood roles in films like The Man Who Knew Too Much [review] and The Maltese Falcon [review], but he is already cultivating that sweaty, ghoulish manner that would see him play villains for most of his career. Hans Beckert is perhaps one of his most varied roles, as it features him jumping through many moods. At times, he is pitiful and almost sympathetic; at others, sinister. A scene of Beckert making faces at himself in a mirror is darkly comic and yet also unsettling. Lorre looks like he is legitimately losing his mind. 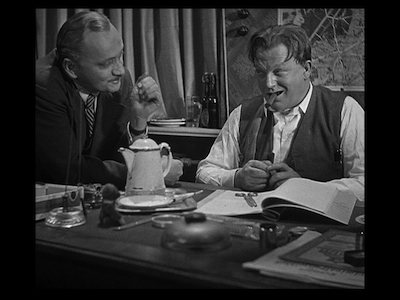 Fritz Lang's approach to the storytelling in M is perhaps best exemplified in how the criminals work through the office building, searching it floor by floor, room by room, until they find their man. (One sees a direct line from here to Rififi [review] and Le cercle rouge [review], in the nearly dialogue-free heist with robbers drilling through the ceiling, among other things.) This is how Lang and von Harbou also develop the script, considering every possible scenario, looking at the community impact the string of disappearances would have, how the fear and paranoia would turn neighbor against neighbor. As a director, Lang controls every aspect of his scenes and how he delivers the information to his audience. For instance, one of the major elements that the restoration efforts of the last decade have set out to correct are all the changes made to the soundtrack without Lang's blessing. He chose to show many sequences without any audio at all, using silence to build anxiety and anticipation. When police raids descend on the streets, there is no dialogue, no ambient noise. It's dead quiet as swarms of men arrive in automobiles and begin corralling suspects. When the sound does return, the initial jolt is shocking. 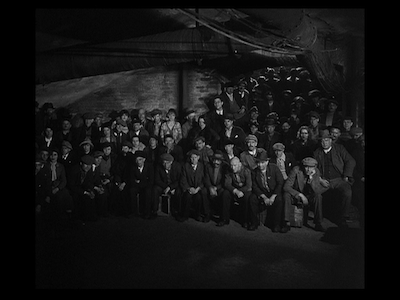 The Munich Film Archive print of M represents the film in its most complete form, quite possibly the edit that Lang originally intended. Though the running time is not much longer than the version Criterion released in 2004, it is substantially different in that the newly discovered nitrate has allowed the restoration team to fix jittery cuts and drop-outs and maintain a more consistent picture throughout. The film looks wonderful projected digitally. Lang's use of high and low angles, and his sense of how to frame an image, particularly his extreme close-ups, works even better when seen at a theatrical size. There are many engagements set up around the country, including the weeklong run at Portland's Cinema 21 that begins this Friday, March 29. Check the Kino site to see if M is coming to your area. It's well worth whatever effort it takes to see this in the cinema. M is an unforgettable film, melding a social consciousness with expert storytelling, balancing the macabre with realism for a queasy balance between the things that scare us and our desire to watch them come to life. 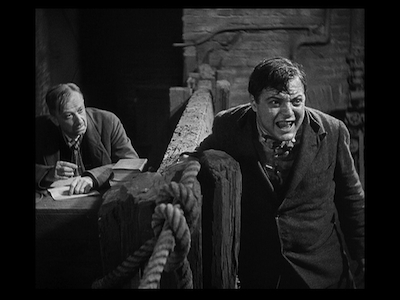