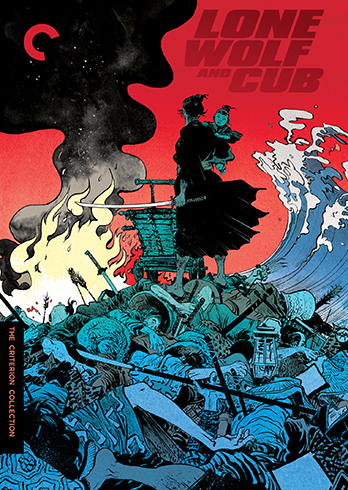 There were 28 volumes of the Lone Wolf and Cub comic book series published over the first half of the 1970s. Each totaled a couple hundred pages and were all created by the same two men: Kazuo Koike and Goseki Kojima. If you know anything about making comic books, that’s an insane accomplishment. In western comics, for one series, we might produce the equivalent of one of their volumes in a single year. They produced more than four times that, and on top of it all, the duo managed to maintain a highly addictive read. Pick up any of the Dark Horse-published English languageeditions, jumping in wherever, and see if you can put it down.

The Lone Wolf and Cub manga originally debuted in Japan in late 1970; the first movie version, scripted by Koike and directed by Zatoichi-veteran Kenji Misumi, was released a mere two years later. Six films were made in all, also released at rapid-fire pace, 1972 to 1974. The movies match the tone of the comics--fast-paced, violent, episodic, and with exposition dialed down to a minimum. The narrative follows Itto Ogami (Tomisaburo Wakayama), a one-time executioner turned ronin, who chose the path of Hell after his wife was killed and he was framed as a traitor to the shogun. Hitting the road with his infant son Daigoro (Akihiro Tomikawa), Ogami hires himself out to those who can afford a minor fee. He will kill as many as you need for the same price, but he will ask you the why of your assignment. 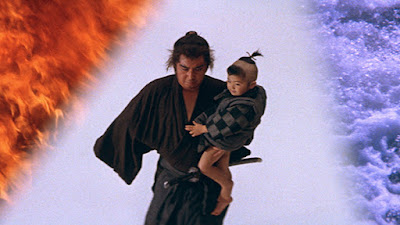 And so it is that this father-son pair travels Japan, Ogami pushing a tricked-out baby carriage filled with hidden weapons, dispensing his own weird version of justice while the child watches. He is an honorable man who took a dishonorable profession when the system failed him, drawing from classic samurai stories in the same way Hollywood westerns created their own cowboy myths, and also prefiguring the vigilante figures that were just around the corner in movies like Death Wish. The difference between Itto Ogami and good ol’ Chuck Bronson, though, is that he remains a heroic figure by taking no clear moral stance. His code is known only to him, and only he can be the judge of his actions. In one particularly effective scene in the initial Lone Wolf and Cub movie (subtitled Sword of Vengeance), when some cowering men dare criticize Ogami for sleeping with a prostitute on order of the thieves who have taken them hostage, the woman defends him, noting that he sacrificed his pride to save her life. Her evidence? If he was scared as they think he is, as they themselves are, how did he manage to maintain an erection?

As a writer, Koike had a knack for such scenes. There is a whiff of exploitation in all of his work (he also created Lady Snowblood), but there is also a matter-of-factness to it that suggests, whatever other prurient impulses might be indulged, this is the way a tough life is lived. Indeed, Ogami and Daigoro don’t really meet nice people on the road. The random strangers and not-so-random enemies they encounter are all too concerned about survival to succumb to social mores. Only the killer really maintains any sense of balance. So much so, he lets his son choose whether or not he wants to travel the journey of death with him. He places a ball and a sword in front of Daigoro, and only after the boy crawls to the sword is his role as sidekick assured. Had the infant chosen the ball, his father would have killed him so that Daigoro could join his mother in the afterlife, rather than be abandoned. 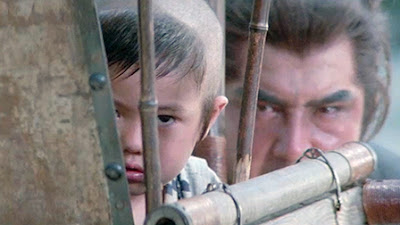 Yeah, I know, it’s totally nuts. But that’s part of what makes the Lone Wolf and Cub movies work. For as down and dirty as Koike’s writing can be, there is also a heightened sense of non-reality here. The over-the-top violence--severed limbs, bouncing-ball decapitations, fountains of blood--is both thrilling and ridiculous--though, the latter is partially due to the passage of time; the stunt work and practical effects seem so clumsy now, they are more pop-art than grisly. It’s a style that matches the expressionistic flourishes that Kenji Misumi adds throughout the film, be it in the garish opening credits or the arty sex scene. Lone Wolf and Cub: Sword of Vengeance is a serious-minded B-movie, with a stoic star who is physically unlikely (a little chubby, not very agile or fast) but somehow totally perfect. Tomisaburo Wakayama completely inhabits Itto Ogami. There is no stray thought, no extraneous movement. He is the quiet death dealer who barely conceals his well-developed conscience.

With the backstory established, Misumi could really lean into Koike’s bonkers plotting for the second entry in the series, subtitled Baby Cart at the River Styx. In the film, Ogami faces two different threats: one he is pursuing, and one pursuing him. While a small village that fears encroaching forces taking over their cash crop hires Ogami to stop the three deadly enforcers who are escorting their would-be master, the Yagyu Clan, whom Ogami defied in the first film when he became a ronin, charge a group of female assassins to take out the interloper. 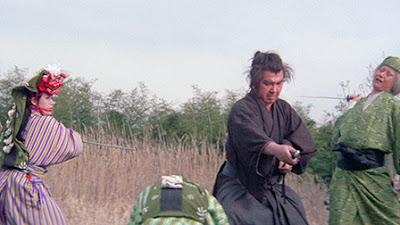 The action in this second Lone Wolf and Cub is more delirious. Blood spurts and sprays, it turns to mist or pools in bright red puddles. Koike gets more inventive with the disguises and techniques Ogami’s enemies employ, and in response, he also gives the baby cart even deadlier devices. To match this, Misumi gets more experimental, framing some of the gore in extreme close-up, burying other instances in surreal effects. This includes a dizzying use of double exposure to create an illusion of speed and numbers when Ogami takes on a ninja squad all by himself.

Characterization in Baby Cart at the River Styx doesn’t necessarily go deeper, but it is more assured. Wakayama merges more and more with the role, portraying Ogami almost as if he were in a trance or sleepwalking: heavy eyes, blank face, no excess emotion. There is a bit of the Man with No Name to the performance, but even far more redacted, far less reliant on tics, a la Clint Eastwood’s sneer and scowl. We also start to see the assassin as heartbreaker. He denied the prostitute that would have traveled with him in Sword of Vengeance, and likewise here he rejects the head of the women warriors, Sayaka (Kayo Matsuo, Gate of Flesh), whom he has left with nothing but her sword, which itself has been proven ineffectual, since it never stopped Itto Ogami. 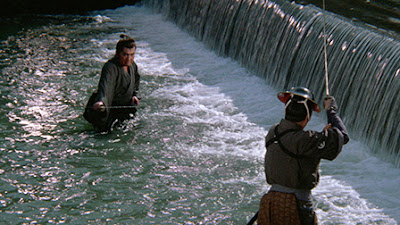 The Criterion Lone Wolf and Cub box contains all six movies (which I will likely review over time). There are also documentaries and interviews, including a new interview with Kazuo Koike. Comics fans will also appreciate the new package art by modern legend Paul Pope, the creator of Heavy Liquid and The One Trick Rip-Off (full disclosure, I was assistant editor on the latter and have worked with Paul many times since). The restorations on the discs are also quite nice, presenting a clear and vivid picture, with the lurid color schemes rendered to full effect. 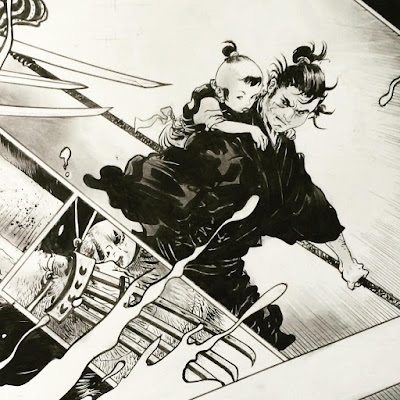