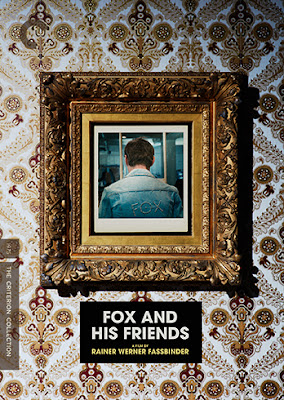 In 1975, the writer/director Rainer Werner Fassbinder applied his finely honed sense of Sirkian melodrama to Fox and His Friends, a small story that encompasses class, ambition, and, at its root, a need to be loved. Fassbinder himself played the lovably dopey Fox, a one-time carnie whose continual insistence that he’d win the lottery finally comes true, cashing him in for 500,000 deutschmarks on the same day his boss and lover was sent to jail for tax evasion. Ironic, as one of the men gets money from the government, the other is busted for not putting his in.

That day, Fox also meets Max (Karlheinz Böhm, Peeping Tom), a wealthy antiques dealer. The two size each other up in at a public restroom in a silent scene full of secret gestures, meaningful looks, and a test or two. It’s masterfully choreographed, almost like something out of Bresson’s Pickpocket. Max has come along at just the right moment, introducing his new lover to a social group befitting his newfound riches. Max’s friends are disdainful at first, seeing their coupling as lewd and Fox himself as a rube. He also has a bit of a rough allure--a bad boy, if you will--so soon one of the men gives in to his lust. Eugen (Peter Chatel, The Merchant of Four Seasons) takes Fox home, and the former con man has no trouble seducing and dominating his conquest. It’s only after the fling becomes something serious that the dynamic changes. 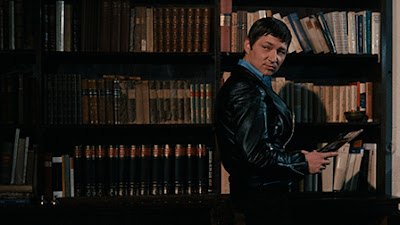 Eugen’s family is going broke. Their bookbinding business is heading for bankruptcy, and the son sees only one way to bail his judgmental father out. He asks Fox to loan them some money, with promises of equity when the loan is paid off. As audience members, we see almost immediately that not all is as it seems with this plan, but poor trusting Fox, so eager to be accepted, and so afraid that Eugen will think he’s stupid, signs the deal without admitting he doesn’t truly understand it. It’s the final shift of power, the con man becomes the conned, making Eugen free to criticize and humiliate his lower-class boyfriend all he wants. His most insidious habit is how he corrects Fox’s etiquette. “If you’re looking for the dessert fork,” he begins, seeing Fox eating a pastry with his hands, and then ends by pointing out that it’s on the left of his plate. He couches his recriminations with a sharp dig, giving the pretense that he’s repeating something Fox already knows. Self-aware mansplaining. (It reminds me of Michael Sheen’s equally infuriating “um, actually” behavior toward Rachel McAdams in Midnight in Paris [review].) 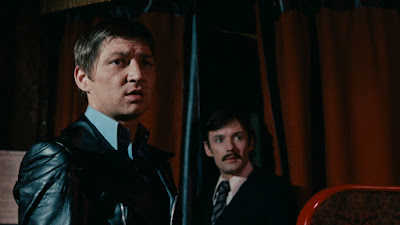 Fox and His Friends is pleasantly simple, with big emotions but few dramatic sweeps to match. Fassbinder approaches everything gently, including his own performance. Rather than play Fox in broad strokes, he goes low-key. Fox is not very bright and surprisingly naïve, but not in a way that inspires laughter from the audience. Instead, as Eugen chips away at Fox’s swagger and reveals the kind-hearted simpleton underneath, we only gain more empathy for the well-meaning bumbler. We wish he’d do better, and would smack him upside the head if we could, but outside of some ostentatious purchases that bite him on the ass later, most of his financial loss comes from wanting to please his lover. His generosity is genuine, and also equal opportunity. One of their worst quarrels occurs when Eugen objects to Fox giving a loan to Klaus (Karl Scheydt, The American Soldier), his carnie boss, when he is released from jail. How hypocritical that Eugen’s anger is because he believes Fox will never see that money again. Fox trusts Klaus will pay him back, and regardless of that, you have to help your friends. Their other terrible fight comes in Morocco, when they look to pick up another man. It’s a strange and nuanced disagreement, hinging on a dual offense: Fox being hurt that he’s not enough, and also disgusted that Eugen doesn’t act with more authority in making it happen. You want this, so be a man and take it. 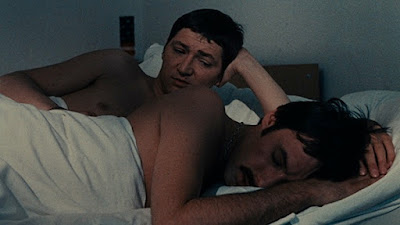 The only characters that the director goes big with are Fox’s belligerent, alcoholic sister (Christiane Maybach) and Fox’s friends at the gay bar, who come with their best “girl, please” sashay. Even more than 40 years later, Fassbinder’s depiction of the gay lifestyle still feels surprisingly fresh. That’s because rather than making Fox and Friends a movie about being homosexual, it’s just a movie with homosexuals in it. In fact, Fox and Friends is completely lacking in heterosexual expression. The only straight couple we see is Eugen’s parents, and they are past the demonstrative stage of their relationship.

But it’s not just the culture that Fassbinder treats matter of factly, it’s the whole of the film. He and cinematographer Michael Ballhaus (Broadcast News [review], The Last Temptation of Christ) don’t aim for the bright Technicolor of the 1950s pictures Fassbinder emulates; rather, they take a rather unadorned approach, something that brings to mind the Dardennes more than it does Sirk. It gives everything the feeling of real life, of actual existences observed. What happens to the characters never happens because of their sexuality, nor are they being punished for it when things go wrong. When LGBTQ advocates talk about representation in cinema and other entertainment, Fox and His Friends is just the kind of thing they mean: a movie where they just exist like anyone else. Fassbinder pointed the way forever ago, it’s time more started following his direction. 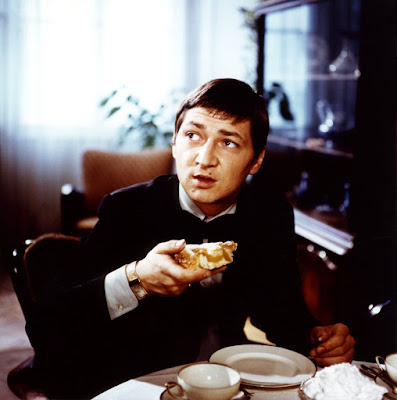