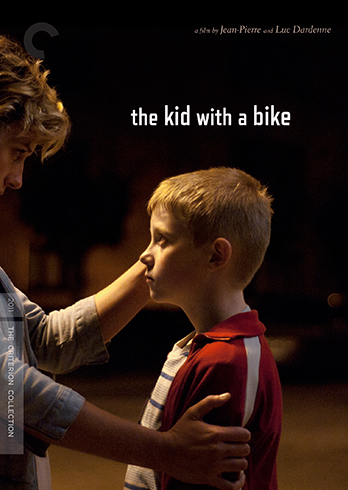 There’s a scene near the very end of The Kid With aBike where the titular kid, Cyril (Thomas Doret), is riding side by side with his unexpected guardian, Samantha (Cécile de France, Mesrine [review], The Young Pope), and he asks her what gear she is pedaling in. Samantha has no idea, and only can guess looking at the gauges and levers on the handlebars. Her ignorance amuses the boy.

It also reminds me of my own biking experiences. Near the end of junior high, a few years before I could drive, I was given a ten-speed bike. It was probably nine speeds too many. No one ever explained to me what the different gears meant, much less how to shift into them. I found a setting where I could pedal comfortably, and then never touched the gears again. 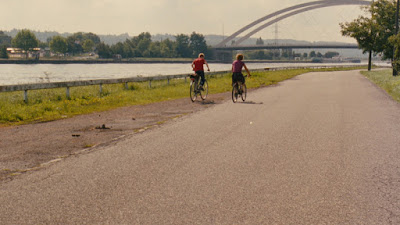 The anecdote itself is completely irrelevant to examining this 2011 film from Jean-Pierre and Luc Dardenne, and yet it is also everything. The pleasure of watching The Kid With a Bike [also on Filmstruck] and, in fact, all Dardenne films is the attention to personal details. Everything that happens matters to the person it happens to, and the specificity is exactly why audiences around the world, be they in the Dardenne Brothers’ native Belgium or here in the United States, identify with their stories. It’s the bigger things that separate us, and the day-to-day that proves we are all basically the same.

I don’t identify with the love of the bike that the kid has, but I identify with his willful ignorance, his refusal to let go of an idea. In this case, that his father, Guy (Dardennes-regular Jérémie Renier, Summer Hours [review]), will come back and take him out of the group home and put their lives back together. The bike becomes a symbol of that. Cyril’s father would have never gone away without giving him his beloved bike. When Samantha brings it to him and tells him she had bought it off someone who bought it from Cyril’s dad, the boy refuses to believe her. 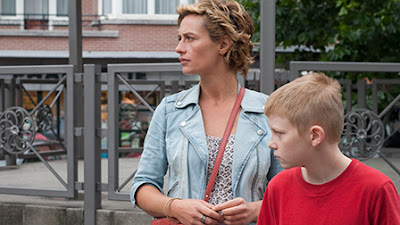 We should all hope for angels in our life like Samantha. She only meets Cyril by chance, while going to an appointment in a medical clinic in the building where Cyril’s father was last known to live. The boy runs away from school and goes there looking for Guy, and when they try to drag him back, he literally grabs on to Samantha and won’t let go. What this sparks in her, we’ll never know. A Good Samaritan streak? A motherly instinct? Samantha agrees to take Cyril on the weekends, which proves tougher than expected when he falls in with a bad crowd. But then, Samantha is tougher than just about anybody. She stands up to the boy’s father and makes him relate his own bad news; she dumps her boyfriend when he delivers her an ultimatum about her new ward; she refuses to give up on the kid even after he’s stepped over a very dangerous line. Cécile de France is a remarkably versatile actor. In any role, be it the gangster’s moll or the public relations woman or the simple hairdresser looking for love, she is always present in the moment. She’s one of those performers that each time you see her, she seems transformed, sending you scrambling to IMDB to see why she looks familiar. 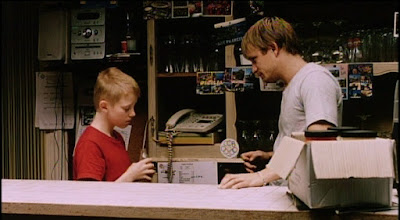 Watching The Kid With a Bike, you’ll want to knock some sense into Cyril more than once. Hell, not only because he refuses to listen, but after the second time his bike gets stolen because he didn’t lock it up, you just want to smack him upsdie the head. (I joked the movie could alternately be called The Persuasive Argument For My Vasectomy.) I don’t know where the Dardennes found Thomas Doret, but he’s excellent. The young actor has a laser-like focus and maintains his mission at all times. Cyril will not be dissuaded.

It’s nearly impossible to not think of Vittorio De Sica’s Bicycle Thieves [review] when examining The Kid With a Bike. It’s not just the father/son story revolving around a two-wheeler, but also the fact that moral questions are raised over the need for the bike. Cyril faces a choice, and though less motivated by self-preservation than the desperate man of De Sica’s film, to a young mind it would be just as important. Wes (Egon Di Mateo), the Fagin of Samantha’s neighborhood, offers him the kind of masculine reinforcement that Cyril seeks, and so he makes doing bad look very good. And hell, if you can’t trust your father to come through the way he’s supposed to, common rules no longer seem valid. 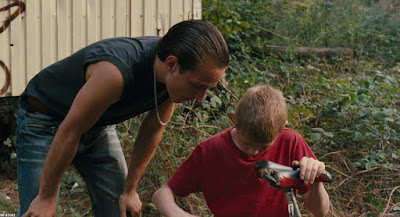 Additionally, the Dardennes work in a similar style to De Sica. The young actor, the real locations, the simple plot, the lack of melodrama--this 2011 Belgian film is very much in line with the 1948 Italian film’s aesthetics. Collaborating as usual with cinematographer Alain Marcoen, the Dardennes make no move that calls attention to itself. There are no tricky shots, no daring overheads, they maintain a grounded vantage point, which ultimately proves to be more immersive than some glossier fictional efforts, in that The Kid With a Bike is far more persuasive as a believable narrative. It is being lived, not choreographed.

Once upon a time when I was editing the Kitchen Sink-style comics of British cartoonist Andi Watson, we received a review that contended “nothing happened” in an issue. Of course, this was not true, we could outline many emotional twists and turns in the comic book, many actual events that the characters had to contend with. It just was lacking in “action.” As Andi quipped, just because someone didn’t get punched, it doesn’t mean nothing happened. And while there is violence in The Kid With a Bike, it is story driven, not plot driven, which is a big difference. Some might say the core scenario is very little to hang an entire film on, but the Dardennes make something grand from it. 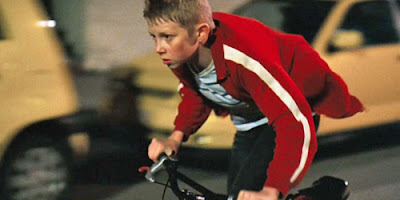 One last anecdote that came to mind while watching The Kid With a Bike: when I was in grade school I had a brown Huffy that I was pretty keen on. That is, until I got to school and was ridiculed because it had a banana seat and no crossbar on the handle. I was told this made it a girl’s bike.  A girl’s bike befitting a boy with a girl’s name, I guess. While I didn’t come to blows with any of the kids the way that Cyril did (at least not over the bike), it did still come to represent a kind of rebellion for me--I rode it regardless of others’ taunts--and provided my personal freedom. I could go all over town on it, much faster and with more ease than on two feet. In other words, it could get me away from those other boys whom I didn’t want to hang out with anyway. Looking back, I guess it did carry a comparable power to the bike in the movie. It maybe wasn’t about my father’s love, but then, ultimately that’s not what Cyril’s represents. It’s about having a vehicle to be who we are and get us to where we feel safe. 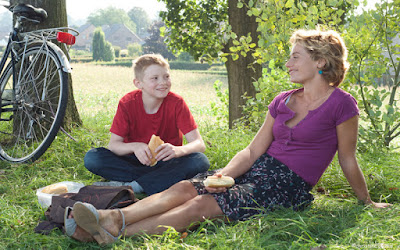