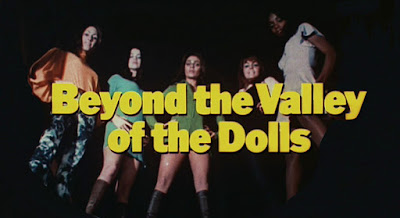 Maybe I should start timing how long I procrastinate with a review when I’m writing about a movie I didn’t particularly care for. It’s been over an hour since I first fired up this document, and I’ve done many things, checked the laundry room a couple of times to see if the other tenants finally moved their clothes to the dryer, tried some of this Jameson Caskmates, cycled trough all for sides of DJ Shadow’s The Mountain Will Fall and moved on to Avalanches’ Wildflower.

In other words, I didn’t enjoy watching Beyond theValley of the Dolls very much. Even approaching it from the point of view of looking at it as a product of its time, trying to embrace the spirit of 1970 and the cultural changes that Russ Meyer’s movie both embraces and lampoons, it doesn’t quite work. The gag doesn’t land. I guess, as they say, maybe you had to be there. 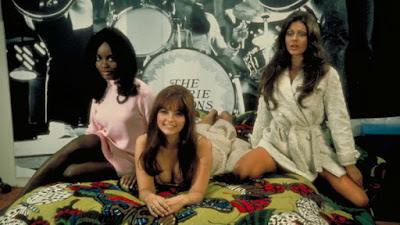 Despite the disclaimer that opens Beyond the Valley of the Dolls, this film very much began as a sequel to the 1967 original [review], but when author Jacqueline Susann objected to the new take on it, she threatened to sue. And so the studio had the names changed of the returning characters and tacked on the title card. The lineage remains, however, as Beyond the Valley of the Dolls offers another melodramatic showbiz narrative, once again taking a lance to the Hollywood lifestyle, but this time focusing on an all-girl rock-and-roll trio. Lead singer Dolly Mac Namara (Playboy Playmate Dolly Read) goes to Los Angeles to visit her Aunt Susan (Phyllis Davis, playing the character that would have been Anne Welles), and she and her bandmates end up embroiled in the California party scene and in servitude to a shady record producer everyone calls Z-Man (John LaZar, who in his sideburns and hip haircut looks a bit like one of Jack Kirby’s supernatural characters; someone should have cast him in a Witch Boy movie). The narrative follows both the trajectory of Kelly’s band and the way she and the other girls sink into a life of booze, drugs, and sex, the act breaks signaled by yet another night of debauchery at Z-Man’s groovy pad. 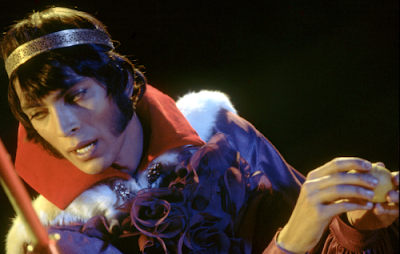 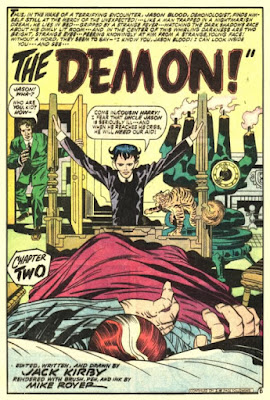 Beyond the Valley of the Dolls comes off as one big car-crash of divergent intentions. Hoping to cash in on the late-’60s counter-culture cinema as typified by Easy Rider [review], the studio heads handed sexploitation auteur Russ Meyer the keys to this kingdom. While he delivered all the kooky lingo and the hippies and psychedelics, his final product feels like one big wind-up, a parody of the fat cats’ perception of what these kinds of movies represented. Meyer basically takes the feel of the Roger Corman acid movies and puts them together with the campy tone of the 1966 Batman TV show, ending up with something closer to the Monkees, minus the earworms and laughs. What makes the whole thing really odd, though, is the underlying sincerity that drives the picture. For however much Beyond the Valley of the Dolls feels like a put-on, it also comes across as a film made with serious intent.

Perhaps this is down to the screenwriter, the famed film critic Roger Ebert, his first contribution to an actual fiction film (he didn’t do much more, but it was all with Meyer). I’d certainly credit him with the script’s ludicrous climax, in which every soap opera cliché is trotted out and tossed into a big pile, a grinning homage to all the sudsy love stories that came before it. You’d also expect to lay the blame on him for the mash-up of characters in Z-Man’s final party: a jungle man, a Nazi, King Arthur, and a pair of superheroes. (Cynthia Myers and Erica Gavin, playing the film’s lesbian couple, dress up as Robin and Catwoman, using the actual costumes from the aforementioned Batman series.) The film nerd is checking off a bunch of items in his bucket list (however much he denies it in his commentary track...but more on that later). 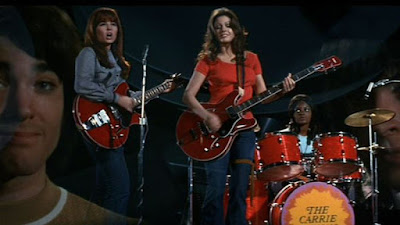 Yet, it’s also Ebert who takes credit for the ludicrous last act reveal about Z-Man, which--without giving too much away--employs a regular Brian De Palma trick years before De Palma ever would, and yet is totally of the times, given that Beyond the Valley of the Dolls came out the same year as that other X-rated multi-car pile-up, Myra Breckenridge. To hear the writer tell it himself, this was not an organic plot development, but a last-minute inspiration. Which, frankly, seems even more De Palma than De Palma, whose final-scene turns usually feel like a filmmaker without a conclusion copping out.

Don’t get me wrong. It’s not all bad. For those who indulge in Russ Meyer movies for the leering voyeurism they provide, you won’t be disappointed--there are plenty of bosomy women in various states of undress. That said, the surprise for me was the displays of technique. The plot may be bogged down by plodding staging and stiff acting, but the mis-en-scene is often agile and even Godardian. Editor Dorothy Spencer, who also worked on Valley of the Dolls as well as such classics as Stagecoach [review] and Foreign Correspondent [review], employs quick cuts to keep things moving, reducing some shots to just a few seconds. Look, for instance, at the scene where Kelly ditches her former boyfriend and manager Harris (David Gurian) to go home with gigolo actor Lance Rocke (Michael Blodgett), sending Harris into the arms of pornstar Ashley St. Ives (Edy Williams). Spencer cuts from one action to another before the first is even finished, jumping back and forth between the heartbreaker and the heartbroken. Even more impressive, though, is the slam-poetry montage of Los Angeles at the start of Beyond the Valley of the Dolls, and the intercutting of Harris and Ashley’s first sex scene with automobile hood ornaments, effectively connecting America’s obsession with flesh and chrome. In these moments, Meyer gets closer to realizing the more avant-garde aspects of Godard or Dennis Hopper than he maybe even realized. 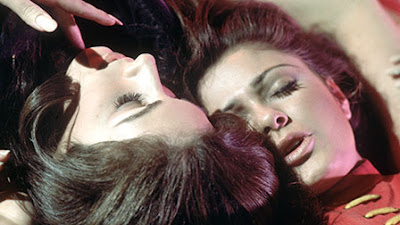 Too bad these brief flashes of brilliance don’t make up for the rest. For me, the biggest sin is how bad the music is. I hate when movies about bands don’t deliver quality tunes. Put together by studio regulars rather than legitimate rock writers and producers, but also featuring the Sandpipers and the Strawberry Alarm Clock (appearing as themselves), the musical numbers performed by the onscreen bands are heavy and intensely dull, striking an inauthentic chord that Beyond the Valley of the Dolls never manages to escape. I suppose many will watch this cult film to laugh at its many faults and fumbles, but I’ve never subscribed to the so-bad-it’s-good school of moviegoing. There’s enough that’s genuinely good to negate the necessity for laughing at the missteps of others. Once transgressive and cutting-edge, Beyond the Valley of the Dolls now just strikes me as tame and misguided. Your mileage may vary. 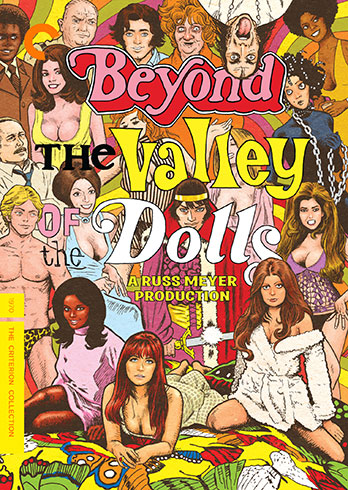 To match the artwork of the Valley of the Dolls release, Criterion brought in multi-talented comics artist Jim Rugg to create a composition for their Beyond the Valley of the Dolls that riffs on the original imagery while utilizing the larger cast. Just about every major and minor character is crammed in there. You should check out Rugg’s own work, including the blacksploitation tribute Afrodisiac and his delightful action comic StreetAngel. 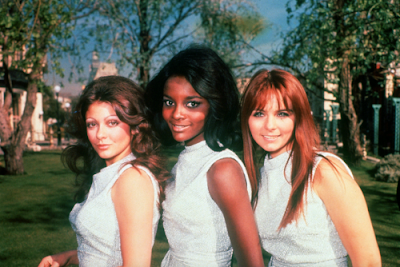 Criterion also loads the disc with extras, including a commentary with Roger Ebert that they had the foresight to record in 2003 (apparently there was a long negotiation for rights). Ebert gives much insight into how the movie was constructed, including admitting that it was pretty much made up as he typed. He shows a genuine reverence for Russ Meyer, and suggests that much of the exaggeration in the performances is down to Meyer’s love of silent film. Interestingly, Ebert never embraces nor addresses any notion of the movie being bad--on the contrary, just as I imagined he did during production, the scribe treats Beyond the Valley of the Dolls quite seriously. I find it funny that he questions the choices of the wardrobe people and set decorators as being too exaggerated, but never quite acknowledges the same thing in his writing. Actually, what’s really fascinating is how rarely Ebert even acknowledges he is the writer. He eventually confesses that Kelly, as the main character, is subject to the whims of the author--and then sort of coyly notes that he’s that author--but outside of the very beginning and the very end, he approaches it from a less invested stance. As commentaries go, it’s disappointing, because he’s essentially defending his movie from the position of a critic who likes the final product, not as someone who had a hand in bringing it together. Which may suggest something about why this movie hits with such a resounding thud a quarter century later: the writer only sees the humor in terms of specifics, but the reality is that it was played so broadly, it has turned into a cartoon as time’s marched on. When it comes to Beyond the Valley of the Dolls, Roger Ebert is not a credible witness.

But again, maybe you just had to be there. 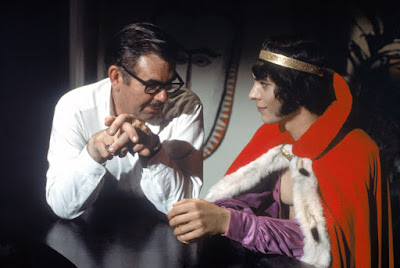