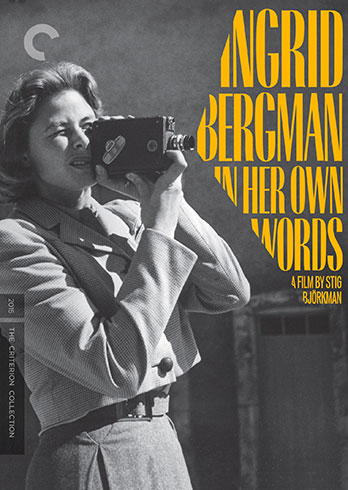 Late in Ingrid Bergman: In Her Own Words, when director Stig Björkman is highlighting one of the actress' final films, Autumn Sonata [review], he holds on a silent close-up from the movie. It’s a scene where Ingrid Bergman stares directly into the camera, letting an emotional beat wash over her, engaging with the audience in a way that lets us see exactly what she is feeling. It's a great moment of punctuation for the documentary, because throughout Ingrid Bergman: In Her Own Words, the performer's children have noted that her lifelong relationship with cameras, both as the subject and the operator, stemmed from the fact that her father--who died when the Swedish-born star was very young, leaving her an orphan--was a professional photographer. She learned to live by looking at a camera, and she learned to love by the way it looked at her. 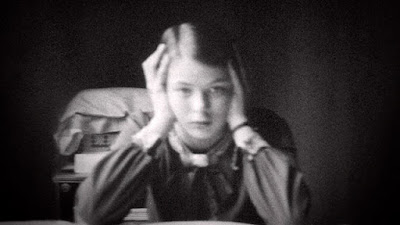 Stitching together news and interview footage with film clips, personal photos, and home movies, Björkman has crafted an intimate portrait of an enduring personality, getting beyond the superficial press image or even the standard tribute. Granted access to an extensive collection of artifacts left behind by Bergman, and with the aid of her four children, all of whom share their own memories of their mother, Björkman shows us the star from earliest childhood, tracking her moves from Swedish cinema to Hollywood, and through scandal and triumph. Narrated by Alicia Vikander (Ex Machina), who reads from Bergman's diaries and letters to three of her closest friends, the images are enhanced by the subject's own private thoughts. It's the things she maybe wouldn't have shared with interviewers or her family that prove most revealing. For those who have seen Bergman's onscreen work, be it her romantic roles in movies like Casablanca and Notorious [review] or her more artful, emotional work with second husband Roberto Rossellini, the secret to Ingrid Bergman’s craft is made clear: even if she often gave more to cinema than she did her day-to-day existence, she was as thoughtful and tender in here real life as she was in her invented ones.

Bergman also possessed an incredible strength, as evinced by her weathering the public scorn following her leaving her first husband for Rossellini. It seems inconceivable that a private individual would be denounced on the floor of Congress as a bad example of morality, but that's just what happened. Through it all, Bergman was resilient, her characteristic charm never wavering. Perhaps her long fascination and association with Joan of Arc gave her some insight into martyrdom. Whatever gave her purpose, Bergman offered no apologies. 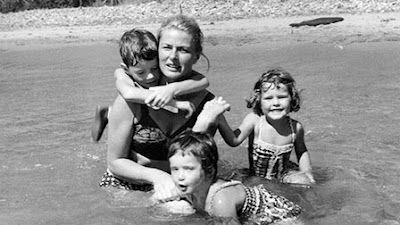 Then again, Ingrid Bergman: In Her Own Words is careful not to draw obvious connections between movie roles and true events, the way a director might otherwise if this were a dramatic biopic--though Bergman's loves and travels would definitely make for a solid narrative, were someone willing to try. No inference is drawn, for instance, from her choice to star in a light comedy about infidelity like Stanley Donen's Indiscreet [review], despite it being very easy to make a claim that it served as a defiant middle finger to her critics. Rather, Björkman lets the work exist on its own. He's more concerned with his subject’s wandering spirit and how her choices affected those around her. Having been given the appropriate time to deal with things, her children are surprisingly generous, admitting they were as enchanted with her as much as the moviegoing public. Which may be the greatest revelation of all: Ingrid Bergman was no manufactured icon, the woman we fell in love with in the movies was who Ingrid Bergman really was. At times aloof and unknowable, but always seductive, always interesting to watch, and always leading with her heart. 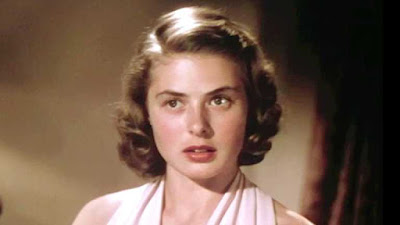 Bonus materials on the Criterion Blu-ray of Ingrid Bergman: In Her Own Words give us extra glimpses into her life and artistry. Deleted scenes and further excerpts from Bergman’s own home movies, shot by the Ingrid herself on 8mm, add to our knowledge of the star’s life. Perhaps more illuminating for film fans are the two bits from early Swedish films. The outtakes from her 1936 romance On the Sunny Side show her natural charisma. Even more telling, though, is her brief appearance as an extra in the 1932 movie Landskamp, her screen debut. Even as a silent background player, Ingrid Bergman stands out, her eyes finding the camera, and engaging with her public. She’s the only one in the group that you’d ever think would end up being a star, and probably the only one there that even dared to dream it. 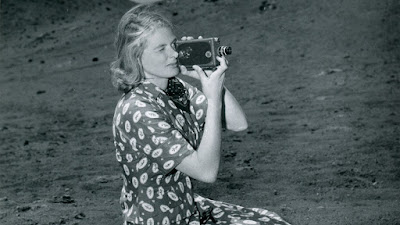 This disc was provided by the Criterion Collection for purpose of review.