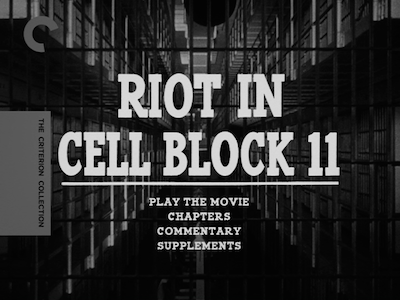 Don Siegel's Riot in Cell Block 11 is an interesting motion picture: seemingly simplistic exploitation that reveals itself to be a multi-faceted debate about crime and punishment that sneaks its message in by baldly adhering to the production code even as it pokes holes in every single one of the censors' anti-noir, "crime doesn't pay" strictures. Like 12 Angry Men [review] set inside a penitentiary, it offers a group of differing personalities brought together by a common goal. How to achieve it is something they will never agree on, even as the audience accepts certain outcomes as a foregone conclusion. The aim here is to use story to stir up all these ideas, to inspire different thinking, and to maybe vilify, if not an individual, then the system he represents. 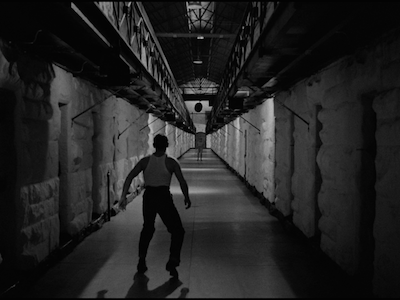 This is not a plot-heavy movie. Riot in Cell Block 11 does not hinge on a clever scheme or a last-act twist that reveals the ringleader had a different, selfish reason for leading the revolt all along. On the contrary, this is a movie that stays the course. Dunn (Neville Brand, Stalag 17) organizes the breakout with the other maximum-security prisoners because he believes change is necessary--the inmates, for instance, want mail and other pipelines to the outside world--and he doesn't waiver from the stated intention. The drama comes from how much his fellow prisoners agree with his methods, the bureaucratic reaction to what's going on, and how that tests Dunn's resolve and changes what he's willing to do to achieve the desired results. 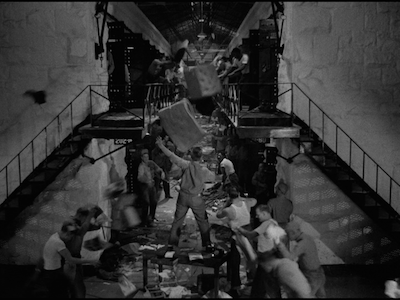 The ruling counterpart to Dunn is the warden (Emile Meyer, Paths of Glory [review]), a good man strangled by budgets and regulations. He knows he could do better if  given more resources, but once the uprising occurs, his mission is to defuse the situation with as few casualties as possible. And nothing will dissuade him from his task, either. Of anyone, he's the most determined to avoid easy solutions if doing so ensures getting the right one. The deathblow for idealism may come at the end when it's revealed how much he really believes will happen in the aftermath--reality is a harsh beast--but  even then, did he not save lives all the same? 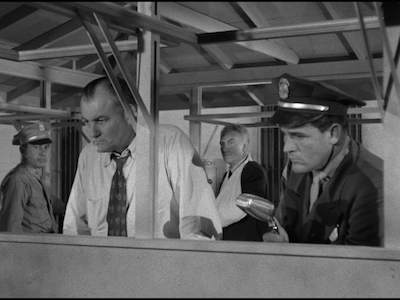 Siegel and writer Richard Collins stack their ensemble with counterpoints and opposites. The warden has Haskell (Frank Faylen, the dad on the The Many Loves of Dobie Gillis), a pencil-pusher sent by the mayor to mind the optics and watch the bottom line. He also has the wives of the guards taken hostage serving as his conscience, calling over the telephone to remind him what’s at stake, and a gaggle of reporters serving as Greek chorus, presenting the difficult truths fueling the conflict as so much exposition. On the other side, Dunn has Carnie (Leo Gordon, Buckskin), the muscle who would rather bust heads than negotiate, and the Colonel (Robert Osterloh, The Wild One [review]), an actual war veteran, put in prison through bad circumstance, who can see the outcome of this battle and doesn't care for the strategy or the eventual cost. Through these many voices, we surpass the surface conflict and delve deep into the more difficult nuance of the disagreement. This is about human dignity vs. public image, budget vs. empathy, and maybe kind of about how these guys did bad things even though maybe that shouldn’t matter when talking about their civil rights.

As sophisticated as it may sound, Riot in Cell Block 11 is a ragged B-movie. Siegel begins the picture as a docudrama, complete with newsreel narration, aided by the stark photography of Russell Harlan (Red River). This drops once the riot begins, and Siegel shifts into stoic melodrama. From the sob stories of the inmates--the prisoner with the sick child, the Colonel’s tale of vehicular manslaughter--to the exaggerated villainy of Haskell or Carnie’s mad-dog machinations, Riot in Cell Block 11 is pure pulp. It’s hard to tell if its social conscience is a cloak it wears to get away with showing violent beatings or if the lurid conflict is the capitulation to box office concerns. Both elements weigh equally in the final cut. Statistics may be shoehorned in by the gabby press men, but they are there all the same. 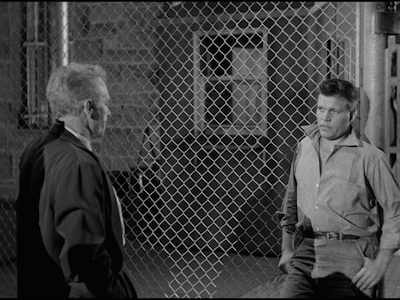 Plus, even if we excise the social message, there is a morality play at the heart of all this. Siegel is looking at how communities function, how the have-nots feel beaten down by the haves, as well as how those same communities fall apart. 1950s politics being what they are, Dunn’s all-for-one speechifying seems a little suspect. While he wants all prisoners to be treated equally, it doesn’t take long before his lieutenants abuse the system he puts in place, or for others to push harder to earn their own advantage. Little is made of race, despite the integrated population; the only hint of any kind of class comes more from an ethical hierarchy. One prisoner is singled out by all others, black or white, as being beneath contempt, and though they don’t say it outright, the coded language suggests he’s some kind of sex offender. 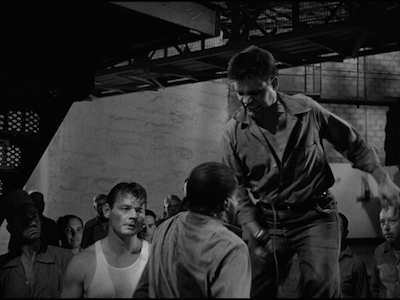 To be honest, Riot in Cell Block 11 could have used a little more of that inside knowledge to show how the prison really operates. The inmates are all a little too clean-cut. When picking his players, Siegel cast interesting faces, but these are still Hollywood hooligans. Neville Brand is tough without really being threatening. The lack of backstory makes his high-minded intentions seem a little forced. We have no reason to believe Dunn would have really emerged over any of the others as the man with the plan.

Still, Siegel’s production is a lot less earnest than many of the other message pictures of the era, giving it an edge over even work by Elia Kazan or Stanley Kramer. This must have felt like pretty rough stuff right about then, and its more lowbrow tendencies allow for Riot in Cell Block 11 to remain entertaining, even as its still-relevant preachiness threatens to bog it all down. Not to mention the downbeat revelations in the final scene, which all by themselves remind us that very little has changed, and America’s capitalist approach to incarceration just continues to get worse. 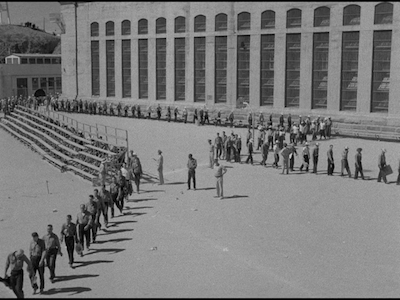