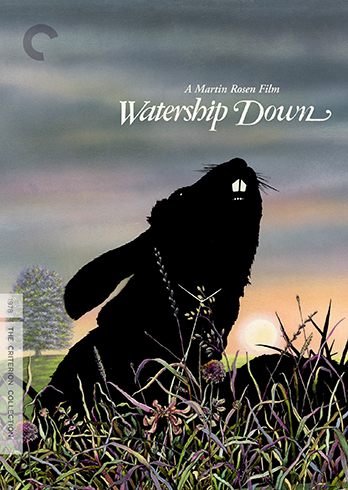 I’m probably about 35 years too late for a first-time viewing of Watership Down. The renowned and somewhat legendary downer of an animated movie passed me by in my childhood, a victim first of my family’s ban on movies and second by my rejection of “adult” animation when that ban was eventually lifted. (And by The Black Stallion, no less. See also: my review of Hopscotch). A devotee of Looney Tunes and Disney, I had drawn a line in the sand when it came to more mature or out-of-bounds cartoons, only capitulating as Robotech and anime took hold. It’s weird the rules we make as kids. I guess part of adulthood is when we stop trading so easily in absolutes. (Most politicians and reality television celebrities notwithstanding.)

Which, let’s face it, my isolation did me no favors. Watership Down could have helped me get ahead of this game a little. Martin Rosen’s 1978 animated adaptation of Richard Adams’ novel--which I remember trying to read once--offers what some of the greatest children’s entertainment has managed over the years: a glimpse at the adult world through the eyes of youth. The story is one perfect for animation. Watership Down tells of a group of rabbits that leaves its familiar warren in search of a new home after one of their number, a bunny named Fiver (voiced by Richard Briers), has a vision of a bloody future. Though the Chief Rabbit (Ralph Richardson) does not believe this prophecy, as outside observers, we know it to be true. The camera gives us a glimpse of the land developer’s sign announcing the new buildings coming to the open field. As we know, the encroachment of man means certain death for woodland creatures. Pretty soon, this field, and all within it, will be gone.

Fiver’s brother Hazel (John Hurt) believes his story, and he rallies a handful of others to leave the warren with him. This includes Bigwig (Michael Graham-Cox), the sergeant-at-arms, as it were; he will become the muscle on their trek. Along the way, the rabbits will find all manner of peril: predators, famers, captivity, and even other rabbits with their own territorial instincts. Naturally, this is all metaphor. Adams’ original story uses the anthropomorphized hares to say something about the human condition. Youngsters watching Watership Down will be made privy to the basic needs that all living beings require, including hunger, shelter, and the compulsion to procreate. At one point, Hazel realizes that his new community is all males, and so even if they do establish a new home, they will die out, there will be no second generation. This is not something I would have been able to cotton at age 6, when Watership Down was released, but surely there would have been an ah-ha moment somewhere down the road, as I likely would have watched this movie again and again. 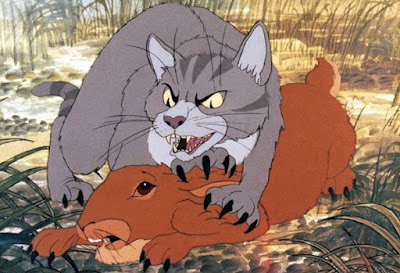 For all this reality, though, we must not forget that we are watching talking cartoon rabbits--or rather, we actually do need to forget, we have to accept the illusion. And so the story is framed in myth, beginning with a folk tale about the origin of the world and the rabbits’ place within it. This sets up symbolism that will carry through the whole of the film, including the benevolent white rabbit and the ominous black rabbit. This opening, as well as a later sequence soundtracked by Art Garfunkel singing “Bright Eyes” (a song written for the movie), features some of the more interesting visuals in the film, abstracting the more traditional animation style to present something reminiscent of the paintings and tapestries of different indigenous cultures. This could partially be the influence of the film’s original director, the experimental animator John Hubley (whom I briefly wrote about here). Hubley passed away during the early days of production, but his eye for the different is important to Watership Down, which might have had less of an impact if it more closely mirrored the popular Disney style as so many have over the years (Don Bluth, for instance). The trippiness may have made Watership Down popular with the midnight movie crowd, but that undercuts the importance of those sequences as the connector between the reality of the world being created in the script and the two-dimensional drawings representing it. The fable gives us a reason to invest while also laying a groundwork for the interior reality; we can believe in the fantastic (in this case, talking animals) as long as the fantasy has some foundation. 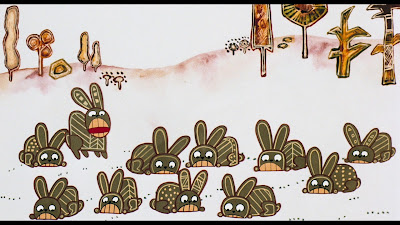 To be honest, even with the clear high-definition transfer on the Blu-ray--or perhaps more so because of it--some of the animation in Watership Down leaves something to be desired. The figures often lack any defined outline, making them appear separate from their backgrounds, which though lovingly rendered in very detailed brushstrokes, come across as more static than I think the filmmakers intended. The inconsistencies speak to the herculean task of creating a full-length feature film in this way, especially without the resources or know-how of a more established studio. Watership Down’s faults are certainly forgivable, and their prevalence in my mind is probably, once again, down to my lack of nostalgia for the material.

Those caveats certainly don’t diminish Watership Down’s impact. The storytelling is still quite strong, and some of the choices are daring even without placing Watership Down in its historical context. As a friend pointed out to me earlier when discussing the movie--the novel is one of her favorite’--the interesting thing is there is no hero. Hazel is not a character who is actively remarkable. Quite the contrary, he expects Bigwig to take point in most things, and the mission is reliant on Fiver’s vision; rather, my friend suggests Hazel’s role is to see the strength in others and foster that. In that sense, he is the best kind of leader. Once again, a good lesson for young folks to learn. We all have our roles, and a community supports that to the benefit of all and the detriment of none. 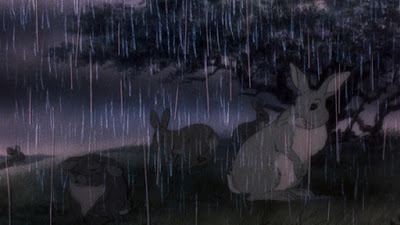 This is a lesson that extends beyond one population or society. The journey of Hazel and the rest in Watership Down is life itself: birth and death, desire and satisfaction, peace and war, honor and treachery. This is the stuff that carries us all through at some point, and for a youngster picking up Watership Down at the right age, Adams and Rosen provide a sort of how-to guide that will likely stick with him or her throughout the years.

As adults, Watership Down’s lessons are not revelatory and the story doesn’t always thrill, but the bigger narrative points make for a good refresher course. A reminder of values we may have lost, an example of the person we maybe wished we could be. Big ears, fluffy tail, and all. 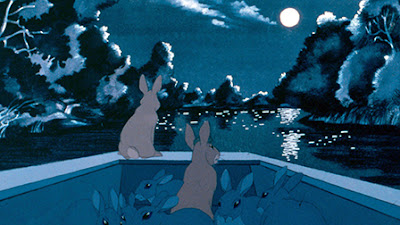 I, too, watched this fairly recently and for the first time. And I also felt that it would have been a much better film with a good dose of nostalgia attached to it. But I was afraid of every movie as a kid, so it's probably best that I hadn't seen it in my youth!