“Sure, I’m for hangin’, just as long as I’m not the one being hanged.” 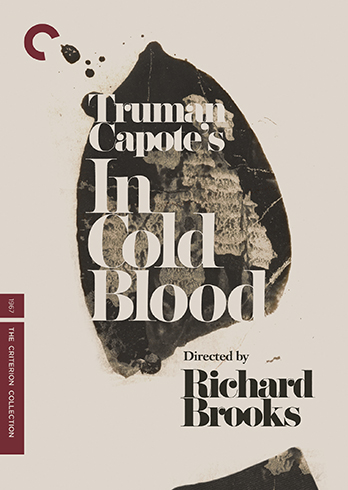 Two things come to mind when trying to figure out how to tackle a respected perennial like Richard Brooks’ 1967 adaptation of In Cold Blood. One, how we’ve come to take truth and reality in entertainment with a mountain of salt; two, anyone who thinks we’ve become desensitized to film violence hasn’t seen this movie recently.

In Cold Blood is based on a book byTruman Capote, whose novel-length reportage is said to have invented the true crime genre. One could argue that the book represents Capote’s truth and isn’t strictly the cold hard facts, but the author’s meticulous depiction of all the details surrounding the 1959 murder of the Clutters, a family of four in Kansas, nevertheless changed how the common populace consumed information about despicable crimes. Capote focused not just on the brutal killings and the investigation that followed, but also the things that got the main players to that terrible night. The book sticks with the murderers all the way to the end and up the steps of the gallows. 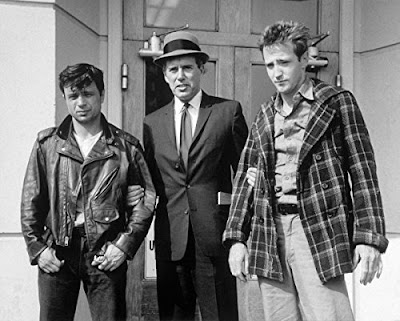 Brooks, who wrote the screenplay for Dassin’s Brutal Force [review] and also directed films like the Conrad-adaptation Lord Jim [review] and Cat on a Hot Tin Roof, doesn’t stray too far from Capote’s approach, even if he must distill the events into more concise morsels. He is also required to dramatize the story, it’s the nature of his medium. There are actors who must stand in front of the camera and re-create the details. It’s a sticky business. If In Cold Blood has any flaws, it’s that Robert Blake’s incisive portrayal of gunman Perry Smith creates a little too much sympathy for the devil, and the victims are little more than objects serving the main narrative. How is it that we know of the relationship between Smith and his parents, but nothing of the relationship between the murdered parents and their two children?

Then again, that might have made what was to come too harrowing, and the re-enactment of the horrendous murder of four is already plenty unsettling without us having much emotional connection to the dead beyond the prototypical nuclear family they represent. 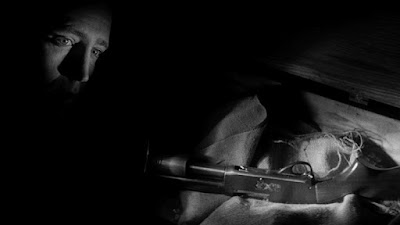 It’s actually an interesting storytelling trick. Though Brooks begins In Cold Blood on a linear track, he skips the crime itself, showing Smith and his partner, Dick Hickock (Scott Wilson) approach the Clutter home, but then cutting to the next morning, when the bodies are found by neighbors coming to pick Nancy Clutter (Brenda C. Currin) up for church. What follows is a circuitous journey around the American west by the killers while, back in Kansas, Police Detective Alvin Dewey (John Forsythe) gathers evidence against them. Brooks only takes us back to the dreadful incident when Perry Smith at long last confesses.

This dreaded flashback hits in unexpected ways, both for how it plays out in terms of actual “plotting,” but also for how unsettling it is. For the most part, the violence happens off-screen, yet Brooks gives us just enough detail that we feel the horror in full. It’s a gut-punch of a sequence. Weigh it against countless episodes of Law & Order opening with descriptions of countless off-screen murders, and In Cold Blood packs more power than the whole of them combined.

Part of the reason for that is Brooks has the benefit of truth on his side. We know this happened, we know the consequences are real. Yet, perhaps the use of the term “horror” is not without merit, as there is something to the writer/directors’ pacing that is not unlike a horror movie. He makes us wait, he withholds what we know is coming, and he allows us to become complacent. And almost complicit. As an audience, we’ve been fascinated by the chuckling Dick and the twitchy Perry, who are more alive than not just the victims, but the police and the Capote stand-in, the invented reporter Bill Jensen (Paul Stewart, Kiss Me Deadly [review]). Forget cop shows, years of westerns and gangster movies have put us on the side of the outlaws, and In Cold Blood compels you to ask just who it is you’ve been rooting for. 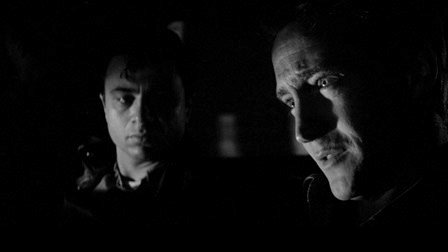 And then, in a complete rope-a-dope, after it’s turned you against these charismatic criminals, the film compels you to ponder whether their end is fair. Brooks sets up a self-fulfilling prophecy early on by having the cop challenge the reporter, saying (and I paraphrase) that first the press asks why the cops haven’t done more, until they catch the killers, at which point the papers start shouting “police brutality,” only to finally try to excuse the bad guys they previously demanded be brought to justice by decrying the conditions that drove them to their heinous acts. While Brooks skips the middle bit, he does end by raising some questions about the effectiveness of capital punishment. Once again, it’s the details that matter. He is meticulous about showing the process of preparing Perry Smith for his final punishment, and this time, he lets the violence occur within the frame. In his hood, Perry is rendered anonymous, a lone figure dropping to his death, hanging there in gruesome isolation, a freak show for us to gawk at and recoil from.

Brooks’ In Cold Blood came along at an interesting time. Though on the surface it looks like an old Hollywood film--familiar actors, it’s black-and-white at a time when color was used for pretty much everything--In Cold Blood embraces the emerging freedom of the late 1960s. Dick’s coarse language, the matter-of-fact references to carnal acts, the homoerotic teasing--these all speak of the progressive cinema of the time. 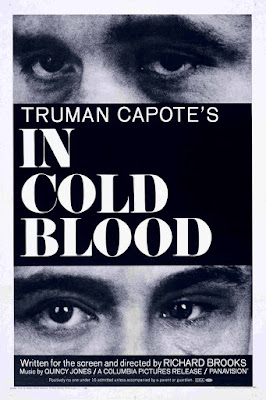 As further evidence to how In Cold Blood straddled the line between fiction and nonfiction, the eyes on this movie poster are from images of the real killers, not the actors who portrayed them. 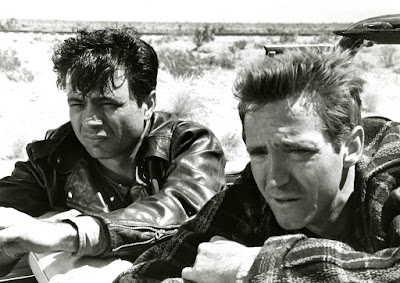 Even in how it is put together, In Cold Blood is anything but a studio picture. Brooks takes us far from the sound stages and back lots of the traditional Hollywood assembly line. Most of In Cold Blood is shot in the actual locations, including the Clutters’ home and the gallows where the killers were hanged. At one point, Currin even rides Nancy Clutter’s own horse. It’s a rather eerie turn, one presumably done to remind viewers that what they are watching actually occurred in the not-too-distant past. In an age where we’ve become jaded by countless scripted television shows passing themselves off as verité, it’s amazing to consider how bold--and chilling--a move this really was.

Of course, one cannot talk about In Cold Blood and not mention Brooks’ phenomenal collaborators. First, there is the music of Quincy Jones, which is effective and sparse, contemporary without being overbearing. Second, the photography of Conrad Hall (Fat City [review], The Rose). How many out there first watched In Cold Blood after seeing the famous scene where the rain on the window causes a tearful reflection on Robert Blake’s face in the cinematography documentary Visions of Light? Hall’s vision here is amazing, straddling a line between reportage and art. There is a beautiful clarity to his images, and a depth of field, that adds credence to the dramatization. Watching In Cold Blood is like watching a film noir that’s really happening.

The sum total of all these efforts defies age. In Cold Blood remain 100% effective and just as relevant. It’s also just a damn fine movie, one anyone can watch without knowing its origins, and it would be just as intriguing. It’s truth that would play equally as well as fiction.

There are plenty of extras on the Criterion Blu-ray for In Cold Blood, including several vintage pieces with Truman Capote. Perhaps of most interest is the short documentary film With Love from Truman made by Albert and David Maysles upon the release of the book, In Cold Blood. We see Truman in his natural habitat discussing the nature of the “nonfiction novel” with a reporter, sharing some of his research materials, and even reading from the book. Listening to him fawn over a photo of Dick Perry, it’s easy to see why some people questioned just how close the author got to his subject. It’s certainly not helped by his own defenses of his compassion for the “lonely” inmate.  Breakfast at Tiffany’s [review] fans will also appreciate a scene where Capote walks past the store with no less than Alvin Dewey and jokes and shares anecdotes about his relationship with the famous brand. 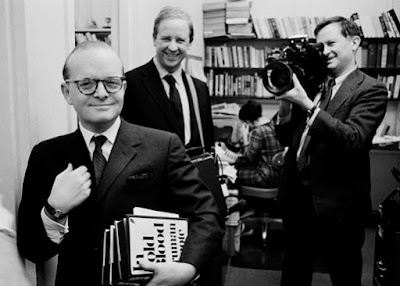