“I picked up a girl. If she hadn't gotten in my way, I wouldn't have stopped. She must be connected with somethin' big.” 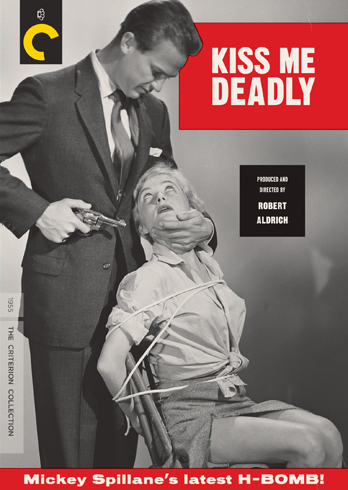 It’s a fairly common private detective line. It makes me think of Nick Cave’s intro to “From Her to Eternity,” a pulpy title if ever there was one. “I wanna tell you about a girl.” This may not have been Mike Hammer’s opening declaration in Kiss Me Deadly but his words describe the opening scene nonetheless. A woman (Cloris Leachman, in her first film role) freshly escaped from a mental hospital runs out into the middle of the road and forces the next passing car to stop. She runs it into the ditch, in fact. But since it’s Mike Hammer, here played by Ralph Meeker (Paths of Glory [review]), he forgives her the indiscretion and gives her a ride. Not out of a sense of duty, he’d have passed her by if he could, but like he said, she got in the way, he had to stop, and now he’s involved.

This isn’t noble, it’s cynical, and it’s what makes Hammer so fascinating. His whole motivation for pursuing the case is partially out of an obligation to see it through, but I think it’s mainly out of annoyance at other people. He appears more concerned with proving the cops are idiots and poking the bad guys in the ribs than he is with right and wrong. As long as he comes out on top, what does it really matter? 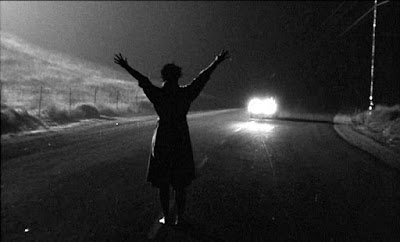 It’s as bleak of an attitude as you’re likely to find in film noir, and it’s a major reason why many scholars consider Kiss Me Deadly to be the last legit example of the movement. There is nowhere to go from here. Robert Aldrich’s 1955 adaptation of Mickey Spillaine is as dark and rough as it gets, and its ending reveals how insignificant we all really are. Not insignificant in the same sense as a guy taking two bullets in the back or losing a suitcase of money, but serious insignificance in the face of all things. The characters here are a victim of the same kind of hubris that has led many a heavy to bleed out on cold pavement, but on a global scale.

The plot is inconsequential. Hammer runs across the girl, the girl dies, he decides to find out who and why. Each step he takes reveals another obstacle, usually in the form of a person who doesn’t want him to know the truth, and he charges through to the next. It’s a genre exercise. One step forward, two back--each revelation gets Hammer no closer to unraveling the truth.

Which, as I’ve suggested, is the point. For once, there is no unraveling the truth. There is only the personal unraveling in the face of one truth: we are all going to die. 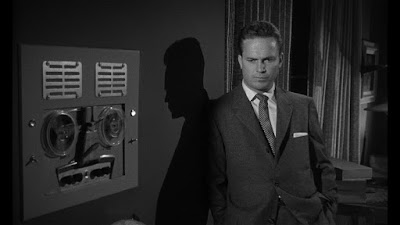 Hammer seems ideally suited to be the one to find this out. He is unfazed by everything he trips over. Meeker plays him as a postured muscle man who can’t be deterred. Once he has something between his teeth, he’s going to chew it down. Nowhere is this more evident than his relationship with Velda (Maxine Cooper), his secretary and girlfriend. As the case begins, Hammer’s not too bothered with the mystery yet, and he’s more than eager to make love to her; when he’s deeper into the conspiracy and what happened to the dead woman is all he can think about, Velda practically crawls up on him, and the private dick barely registers her presence. Velda is bothered, but she’s not surprised, she knows the deadly cat’s cradle Hammer is tangled in. “First, you find a little thread,” she says, “the little thread leads you to a string, and the string leads you to a rope, and from the rope you hang by the neck.” 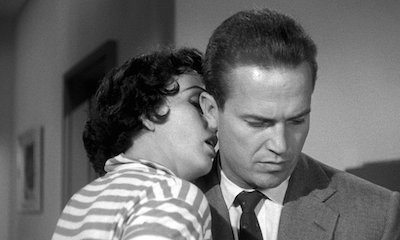 Aldrich sees Hammer as a modern antihero, a man who works with his hands caught up in a plot of men who work with their minds. The essential difference, it would seem, is that these other guys don’t consider the consequences. Are you ready for spoilers? The thing that everyone is after and that will ultimately undo everything--they call it “The Great Whatsit”--is a briefcase containing a nuclear device. That’s right. The stuff that dreams are made of is no longer a counterfeit bird statue, but a legit A-bomb. Anyone who has seen Pulp Fiction has seen Tarantino’s riff on the Kiss Me Deadly briefcase: when you open it, it glows. Only here, it won’t just burn your hands off, it could destroy the whole world. Which it very well might be doing at the conclusion of the picture. Hammer and the dead woman’s roommate, Carver (Gaby Rodgers), watch from the water as a beachside house explodes after Carver opened the Maguffin. Only, as the screen fades to black, the explosion isn’t over, and we don’t know if Hammer and the gal get out alive. The title card that says “The End,” in this case, is more of a big maybe. 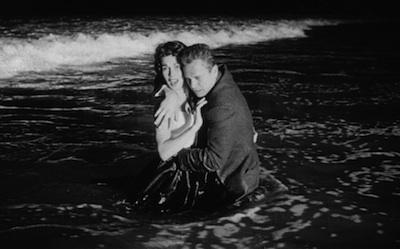 As a piece of cinema, Kiss Me Deadly is as roughly sculpted as the hero it portrays. Ernest Laszlo’s photography is imprecise and off kilter. The camera barrels through the scenes in much the same fashion that Hammer does. Zooms are clumsy, framing is out of whack, angles are imprecise. It’s as if there is no space to make it pretty. Time is running out! The world is out of order! Even the credits are running the wrong way!

Or it might be as simple as the fact that what Kiss Me Deadly is portraying isn’t meant to be pretty. It’s not just Hammer’s cynical attitude that jars the viewer, even to this day, but the nastiness of the violence--the first burst of which is a rather gruesome torture scene. One that happens almost entirely off screen, mind you, we just see the girl’s bare feet and hear her awful screams, but the effect is just as grisly as any bloody slasher movie. Opening with that sets the stakes high: this is the kind of vicious business Hammer is going to have to find retribution for.

That there is none may be the most cynical part of the whole affair. Sure, all the bad man are dead, but pretty soon, everyone else will be, too. I’m sure there’s cold comfort in knowing they went first. 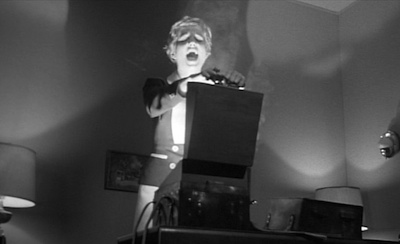 That's not Carver on the beach at the end, she's burnt up. It's Velda.