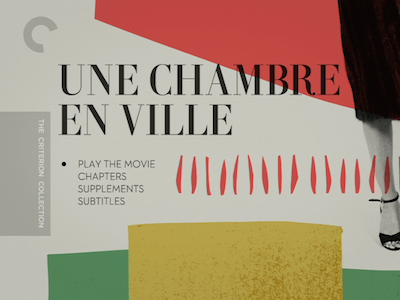 For the final selection in The Essential Jacques Demy, we don’t exactly go back to the start, but at least back to the high point of the director’s career.

1982’s Une chambre en ville is a distant cousin of The Umbrellas of Cherbourg [review], taking that film’s musical stylings and applying them to a more realistic aesthetic, complete with political underpinnings. Set in 1955, this operatic motion picture stars Richard Berry as Francois, a metalworker on strike with his union brothers. Une chambre en ville opens with a clash between the workers and the police, switching from a black-and-white newsreel style to color as the first blows are thrown. Francois escapes unharmed, but his life is put in jeopardy regardless. With no money to pay the rent, he risks eviction from “the baroness,” Margot (Danielle Darrieux), who lets him a room in her apartment. 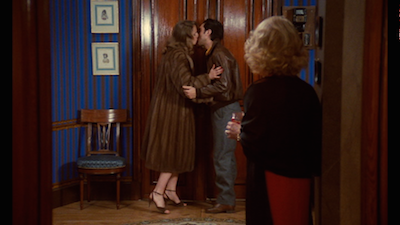 Margot doesn’t care for politics, she has problems of her own. Her daughter Edith (Dominique Sanda, The Conformist

) is in a loveless marriage to an impotent man (Michel Piccoli) whom we will also find out has a violent temper. Granted, Edith taunts him, leaving the house wearing a fur coat and nothing else and selling herself on the streets. Edith is stubborn and flighty. She consults a fortune teller before making any decisions, and it’s through the tarot that Edith is informed that she’s destined to fall in love with a metalworker.

Unsurprisingly, this puts her on a collision course with Francois, who falls for her completely. It’s an added complication he doesn’t need. He is already in a relationship with sweet Violette (Fabienne Guyon, Life is a Bed of Roses [review]), who is trying to find the right time to tell him she’s pregnant. 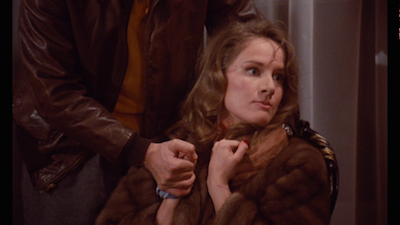 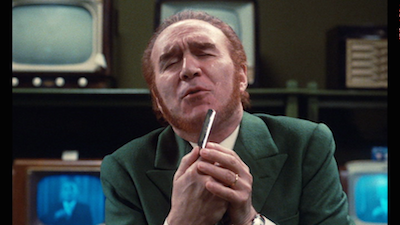 Une chambre en ville takes place over the course of two days, though two days intensely lived. Love is lost and gained, as are jobs. And lives. Demy’s scenario has the same exaggerated romanticism as his more famous breakthrough, but he has traded Cherbourg’s candy-colored set decoration for the drabness of real life. Margot’s apartment may be dressed in red, and Violette’s frock may also be a lovely pink, but the dominant color here is the brown of Edith’s hair and her fur coat. The streets where Francois and his comrades fight and bleed are grimy and dark. Une chambre en ville combines cinematic conceits with more down-to-earth concerns. 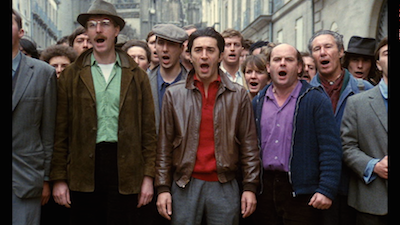 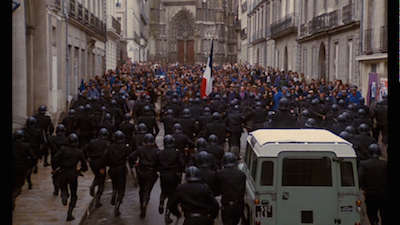 It works fairly well, even if it’s not as invigorating or swoon-worthy as The Umbrellas of Cherbourg. Une chambre en ville lacks much of what made that movie remarkable. Dominique Sanda is fine, but she’s no Catherine Deneuve. Likewise, composer Michel Colombier (The Model Couple [review]) is no Michel Legrand.  The music in Une chambre en ville is absent of the sweeping melodies of Legrand’s score, and it’s also missing a memorable theme. I’m not too sure how I feel about more modern electric instruments creeping in, either. 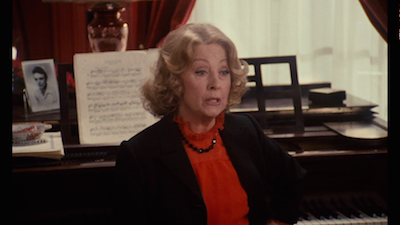 Even so, there is a vibrancy to Une chambre en ville that is still quite impressive, despite it being a later period effort from the filmmaker. For those wondering why the boxed set skips more than 10 years between movies, the documentary accompanying this disc sheds some light on the topic. Released in 1995, five years after Demy’s death, The World of Jacques Demy is a loving tribute put together by his wife, Agnes Varda (who, of course, is an accomplished filmmaker in her own right). A loose biographical portrait cobbled together with film clips, archival interviews, and new conversations with friends and admirers, The World of Jacques Demy offers insight into the man’s unique passions, revealing his origins as a child of war and an early film buff. Varda covers all the hits, but also a few of the misses. There are some intriguing glimpses of lesser-known Demy movies, including his mid-60s American picture, Model Shop

, a sequel to Lola [review] and originally intended as Harrison Ford’s film debut. (Varda includes his screen tests, as well as tracking the actor down to talk about what almost was.) There is also a manga adaptation called Lady Oscar and a rock ’n’ roll musical that earned Demy little traction between Donkey Skin [review] and Une chambre en ville. The only notable release I had heard of from his latter period was the Marcello Mastroianni and Catherine Deneuve comedy A Slightly Pregnant Man

. Perhaps we could get an Eclipse boxed set of the lesser Jacques Demy? Because, honestly, I’m intrigued enough to track some of these down. 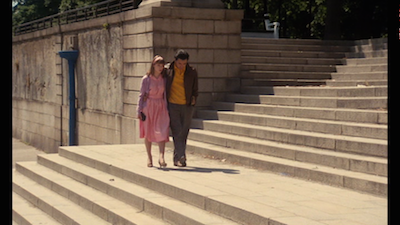 The World of Jacques Demy actually makes for a nice capper to The Essential Jacques Demy. Though Varda promises a discreet glimpse at her lover, the affection is evident. She views her husband with the same romantic sparkle that made all the movies here so vital. He was a man who lived his fantasy, and then did his best to share it with us. 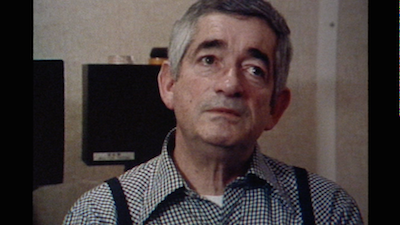