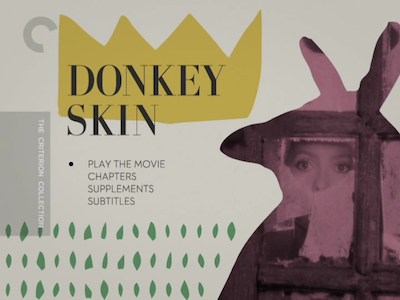 Though all of his musicals had fairy tale elements to them, Jacques Demy waited until 1970 to embrace the genre in full, adapting Charles Perrault's Donkey Skin for a big-screen, live-action version of a Disney cartoon.

Catherine Deneuve once again stars, playing both the Queen and the Princess, a smart device given the film's darker plot developments. As Donkey Skin begins, the Queen passes away, her illness the price to be paid for the good fortune that has otherwise befallen the kingdom. The land is rich, thanks to a magical donkey that poops money and jewels; however, the royal family has no male heir, and the Queen makes her King (Jean Marais, Orpheus [review]) promise he will only remarry if his new wife is both a princess and as beautiful as she. This, of course, proves impossible as no one is as beautiful as Catherine Deneuve except...well, Catherine Deneuve. Seeing no other alternative and suddenly smitten by the child he previously ignored, the King becomes determined to marry his daughter. 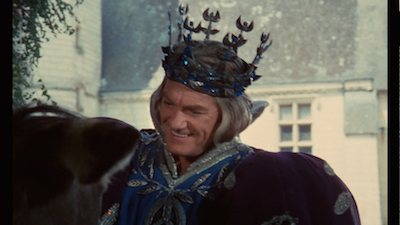 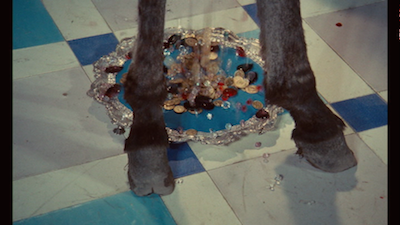 Suspecting that this is not kosher, the Princess goes to her fairy godmother (Delphine Seyrig, Jeanne Dielman, 23, quai du Commerce, 1080 Bruxelles [review]) seeking advice. When the fairy's first challenges to test the King's devotion fail, she has to get drastic. She suggests her goddaughter request the skin of the magic donkey, assuming killing the golden ass will be too much to ask. This too fails, and so as a last resort, the fairy has the Princess hide away as a scullery made in a nearby village. She wears the donkey's hide, head and all, as a cape, and never washes, a trick to keep suspicious noses away. 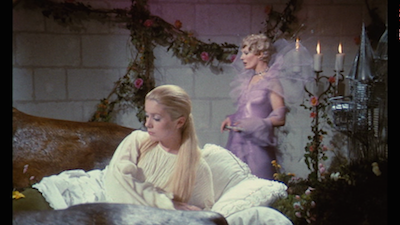 On paper, this set-up is grotesque, something Demy is well aware of. Unlike most modern retellings of fable and folklore, the French filmmaker doesn't scrub the narrative of its more difficult elements. His script mines the original for its most transgressive taboos. Not just incest, but vanity and prejudice, as well. How people treat the girl they call Donkey Skin exposes their own petty bigotry. As is the nature of Cinderella stories, the beautiful Princess can be hiding in the dankest of corners. 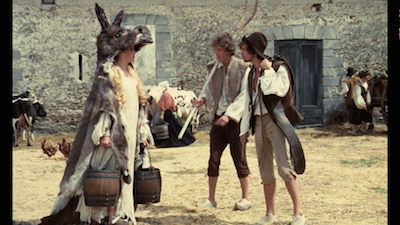 It's the person who can see past the superficial that is rewarded with love and treasure. The Red Prince (Jacques Perrin, the artist in The Young Girls of Rochefort [review]) from the next kingdom over sees past the enchantment and falls in love with Donkey Skin. The second half of Donkey Skin is devoted to his manipulating his  parents into letting him marry the disguised monarch. 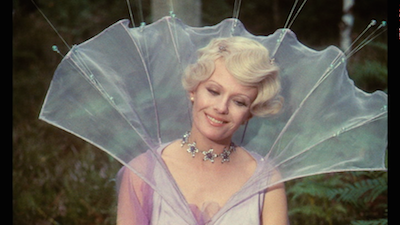 Stylistically, Donkey Skin is fascinating. Demy establishes a kind of shabby chic. As befitting the late 1960s, he is adopting an old form for new aesthetics. The opulent fashions behind castle walls seem gaudy and inauthentic next to the grungy reality of medieval life. One has an almost sensory reaction to the dirtier aspects of serf living even while being enchanted by the gorgeous magic of the glamorous fairy. Seyrig is an excellent choice to play a mystical seductress. Her fairy godmother has her own selfish motives to keep the King from finding his bliss. It's suggested there is some dalliance in their past that left her betrayed. The Princess is like a child of divorce caught between two bitter parents. The Lilac Fairy also provides Demy with his most potent symbol for the skewed point-of-view of his aged allegory: as the years pile up and overtake the fairy, so do her powers fade. Just as most of us lose our imagination the longer we grow in the tooth. 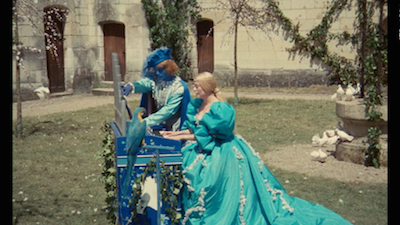 The surreal set designs in Donkey Skin, including the use of actual human beings as furniture and props, recall the exquisite art direction in Jean Cocteau's Beauty and the Beast [review[. This is probably not a coincidence. Nor is the fact that Demy's King was Cocteau's Beast. Both auteurs challenge our grown-up notions of magic and illusion. We see the magicians at work, we hear that the Lilac Fairy is losing her fairy dust the older she gets, but our desire to believe and be swept away wins out. Unlike Cocteau, Demy indulges in a few anachronisms, the most notable of which is the appearance of the helicopter in Donkey Skin's finale. Is it possible a young Alex Cox was sitting in a theater all those year's ago taking notes, or is the end of Walker [review] just one of those things...?

Jacques Demy mostly works with a new team here, though he does reunite with Michel Legrand, who wrote the music and the songs. Donkey Skin comes off as both a natural transition from what came before and also the realization of a dream. It's the kind of movie Jacques Demy had to make. A sincere fairy tale that serves double-duty as a commentary on the same. 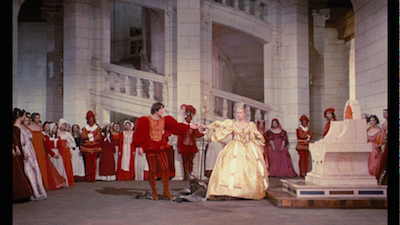 You completed certain reliable points there. I did a search on the subject and found nearly all persons will agree with your blog. Dermajem