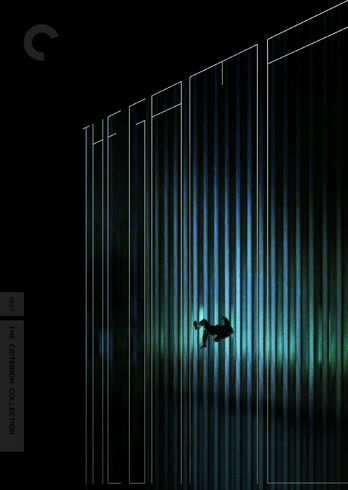 "Does this thing end?"

Michael Douglas, playing investment banker Nicholas Van Orton, asks the question midway through a rigorous test to determine whether he is suitable to participate in the elaborate scenario that is the singular plot point of David Fincher's 1997 movie The Game. It's a question he will ask again as the film wears on, one of many echoes and repeats that occur throughout the motion picture.

More important than the question, however, is what is going on and how he asks it. Van Orton has been watching a series of filmed images with subliminal messages buried in them, a horrifying montage certainly meant to recall a similar B-roll shown to young Alex in Kubrick's A Clockwork Orange

*. Fed up with the grotesquerie, the man stands and turns into the blinding light, bathed in the flickering images as they emanate from the projector, staring deep into the lens. It's as if he is asking the movie itself when it will stop. 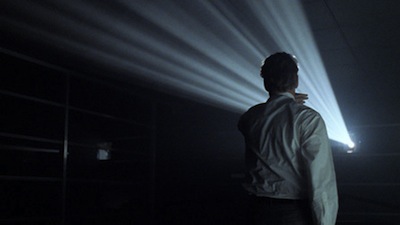 Or letting it absorb him. Because, for whatever else it is, The Game is a tribute to the art of cinema. It is a romp through motion picture technique, bringing the visceral experience that movies attempt to re-create to its protagonist, establishing its own meta reality, a wheel within a reel. Nicholas Van Orton will soon find himself in his own version of North by Northwest

, part of an unstoppable action scenario, though this time by way of the convoluted grifts in con men movies. The staging of each incident would be impossible in real life. Or so we tell ourselves. Isn't the biggest con of a movie like The Grifters

or The Brothers Bloom [review] that we end up accepting that these schemes work? It's the promise of all good movies: for the two hours we sit in the dark, we are made to believe.

Nicholas Van Orton is kind of your typical protagonist for this kind of story, the imaginary rich man bored with his routine and too disconnected to know it. Divorced, isolated, all work and no play. His brother Conrad (Sean Penn) is his predictable opposite, a "free spirit" whose life choices have had other consequences (drugs, legal trouble, etc.). It's Conrad who buys Nicholas a session with Consumer Recreational Services. This clandestine business, conducted behind smoked glass, provides specialized experiences for each of its clients. What Nicholas will soon be in for is an elaborate set-up, a running adrenaline-junkie dramatization of a wronged man scenario. Nicholas is barely in the game before he loses track of what is real and what isn't. Is he really playing a part in an out-sized fiction, or is he being scammed? Hospitals, cops, attack dogs, guns, car crashes, private eyes, pretty girls, keys with no locks, a mausoleum in Mexico--all of these puzzle pieces could either add up to the greatest thing that's ever happened to Nicholas, or it could just be a backdoor to ruining his reputation and siphoning off his money. 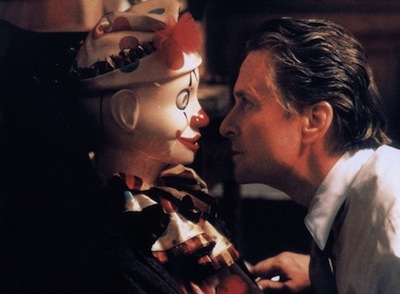 The excess on display is its own gag. At one point, Nicholas loses a shoe and comments, "There goes $1,000." When the waitress, Christine (Deborah Kara Unger), clarifies that his footwear costs a cool grand, he quips, "That one did." The economic divide between them--and really between Nicholas and everyone else--is one Fincher never lets us forget. His lifestyle is ridiculous, as is his endless pursuit of more. This is the underlying critique of The Game, and it won't be the last time Fincher puts the boot into greedy corporate stooges. (See also: the character assassination of Mark Zuckerberg in The Social Network [review]; the villainous bankers in The Girl with the Dragon Tattoo

.) This skewering seems even more prescient now, or at least no less relevant, given the current ongoing, worldwide economic crises. Nicholas Van Orton is reckless with how he spends his money and lacks empathy when his actions cost others. The fact that the film's criticism of his behavior doesn't maintain its sharpness is perhaps why many find The Game unsatisfying. Nothing bad actually happens to Van Orton, and his sins are washed away right alongside his daddy issues in the movie's finale.

The thing is, the moneyman's existential story arc is secondary to the plot. Van Orton learning to live in the moment and to be more self-sufficient (I'm surprised we don't actually get to see him change a tire by the time credits role) is merely the excuse that allows Fincher and screenwriters John Brancato and Michael Ferris to do all the other stuff.** It's like one of the characters explains, "Discovering the object of the game is the object of the game." Any greater meaning is unnecessary. The whole idea here is to keep us guessing, keep us watching, and keep us asking what happens next. 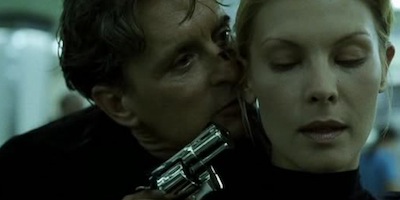 Which is what makes The Game such a rollicking success. For as obvious as Fincher's technique can often be--and pause during literally any point in The Game and you can't help but admire how beautifully Harris Savides (Somewhere [review]; Margot at the Wedding [review]) shoots this thing--the magic trick here is the sleight of hand by which the expert filmmaking disappears. The music, the editing, the excellent performances from the movie's cast--all of these things blur together and fade into the background. Fincher doesn't give you time to ponder how it's all fitting together, you're too busy trying to keep up. He is the cinematic con man, and we are his marks, and the only way the ruse will work is if we don't ever question its veracity.

Thus, it doesn't really matter if, in a way, there is no "there" there. The Game has shallow characters and a hollow center, but the pleasure that comes from watching the wheels spin round and round means that none of that matters. Hell, even the end, with a promise of canoodling at the airport, offers romance without any of the weighty details. Fincher could have just as easily cut to Deborah Kara Unger and Michael Douglas rolling into an upper berth as their train passed through a tunnel. The Game is, indeed, that obvious--and also that entertaining. 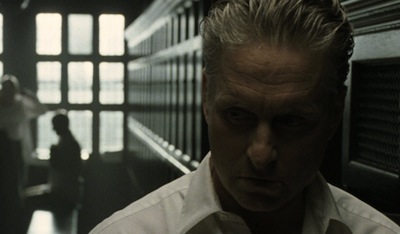 * The piano trills throughout the movie, provided by composer Howard Shore, kept making me think of another Kubrick film about deception, Eyes Wide Shut

. Any actual reference point to that movie would be impossible, however, since it was still two years away when The Game was released.

** There apparently were many other writers who doctored the script, which isn't surprising. Brancato and Ferris, as a team, are responsible for quite a few stinkers, including De Palma's Femme Fatale

. These writers could use a helping hand or two.