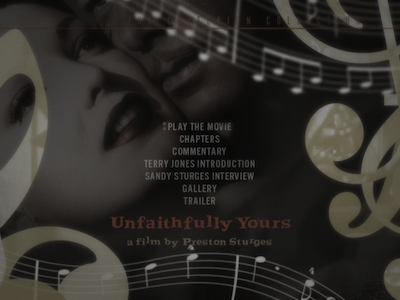 Preston Sturges' 1948 release, Unfaithfully Yours, is probably his darkest comedy, but it also has a heart of pure romance.

Rex Harrison (My Fair Lady [review]) stars as Sir Alfred, a temperamental orchestra conductor who, upon returning from a trip overseas, is informed by his obnoxious brother-in-law (Rudy Vallee) that he has evidence that Sir Alfred's wife, Daphne (Linda Darnell, Fallen Angel

), might be cheating on him. It seems that, as he was saying good-bye, Alfred made an off-hand comment to the other man to keep an eye on his wife for him. The other man took him literally and hired a private detective (Edgar Kennedy) to follow Daphne around when he couldn't do it himself. 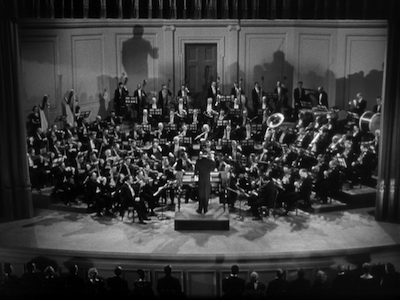 Upon first hearing the news, Alfred rejects it, insisting it's impossible and not even bothering to look at the report. Once the knowledge is out there, though, it keeps coming back up, and the harder Alfred fights to not know, the more the information works its way to him. The scandal hinges on an unexplained half hour when Daphne visited Alfred's assistant, Tony (Kurt Kreuger), dressed in her nightgown. Is it possible that an illicit love affair has been blossoming right under the music man's nose the whole time? 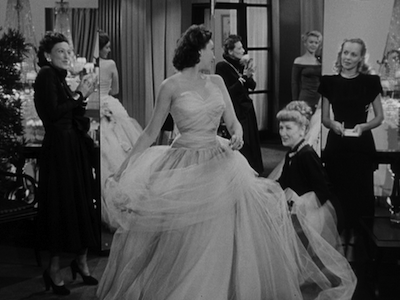 Unfaithfully Yours is, essentially, a comedy about jealousy, with Sturges using the tricks played by one man's mind to explore the notions of fantasy and revenge and the stupid spirals we can send ourselves into when possessed of an idea we can't shake. As Alfred conducts that evening's performance, with his wife and secretary, not to mention the brother-in-law and his smart-mouthed sister-in-law (Barbara Lawrence, whose caustic delivery dominates every scene she's in), watching from boxed seats, he imagines a trio of scenarios. Sturges and director of photography Victor Milner (It's a Wonderful Life [review], The Furies [review]) push into the man's mind, zooming in on his eyeball, dissolving into his daydreams. First is an elaborate scenario where he frames Tony for Daphne's murder, and then another where he takes the high road and capitulates, and finally, a third where he challenges his rival to a game of Russian Roulette. Here even Alfred's fantasy life turns against him, in that he does not succeed. While we entered his musings via the eye, we exit in macabre fashion, peering back into the real world through the bullet wound. It's a gruesome and ingenious cross-fade. 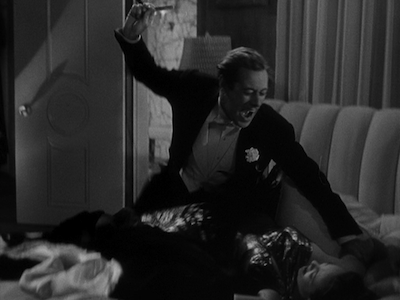 Rex Harrison is gung-ho, giving a dastardly, high-octane comic performance as the moody, self-involved artiste. He is biting and sharp with Sturges' verbiage, but also quite agile and adept playing the klutz. When the movie shifts to Alfred trying to make these dreams real, Sturges builds an extended slapstick sequence where Alfred's every move ends in some kind of bumbling disaster. The implication is bitterly ironic: Alfred is helpless to do anything himself, but the man he wants to frame for murder is the one who usually does everything for him. 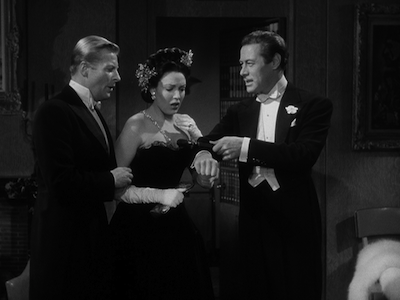 It's a clever commentary on the life of an “artistic genius,” and the culmination of a secondary theme that runs throughout Unfaithfully Yours. Arguably, the reignited passion Alfred feels as a result of his marital doubts goads him into the performance of a lifetime. As the three different daydreams play out, the music that Alfred is conducting keeps going. It rises in emotion and intensity as the imagined scenes do, and by the time we wend our way back to the symphony hall, Alfred has whipped the players--and his audience--into a frenzy of sound and excitement. It's one of the best examples I can think of where a director uses the soundtrack for both text and subtext. Unlike a standard score, which is usually there to underline and augment, Sturges uses the classical music as a practical device, making it an integral mood enhancement for his protagonist. Life, love, and art are all intertwined. 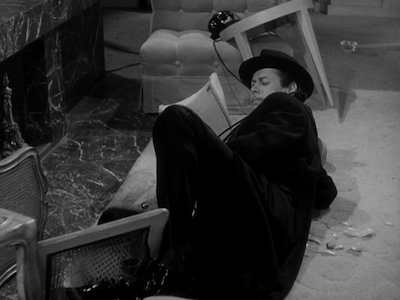 Unfaithfully Yours, unsurprisingly, ends the way most screwball comedies and romantic misadventures do. Alfred is, after all, a buffoon, not a real killer, and had he been right or successful, this would be an entirely different motion picture. The great thing about Preston Sturges is that he pulls no punches. The writer/director/producer hits the lovey-dovey stuff hard in the end, but he makes it work. He has basically added a second crescendo to the first (Alfred finally confronting Daphne), rather than a romantic coda or denouement. The climax is not the fury and the resolution is not its deflation, but rather, the true peak, and the perfect note to chime out on, is the reaffirmation that, indeed, love has come true for these two, and nothing can tear them apart. 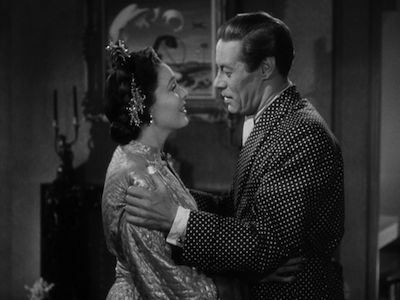