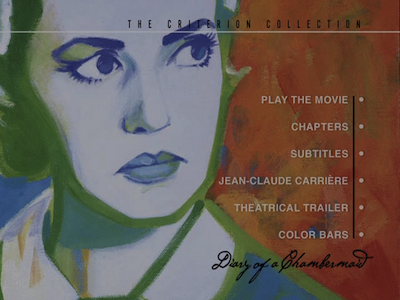 Revisiting Jean Renoir’s 1946 version of Diary of a Chambermaid compelled me to dust of Luis Buñuel’s 1964 remake, as well. As I noted in my review of the former, I have an irresistible urge to put the two of them together, much like Criterion did with the Renoir and Kurosawa versions of The Lower Depths. Apparently there is a new adaptation in the works starring Marion Cotillard, as well, and time will only tell if I’m going to end up having a triptych.

Cotillard is certainly a worthy successor to the great Jeanne Moreau as Celestine. Moreau played the lead with a strength and dignity absent from Paulette Goddard’s original interpretation. Goddard mistook loudness for being assertive, which might have been a good choice had the film been portraying the chambermaid as a rube who didn’t know her place rather than the city girl all the country peasants admire and lust after. Moreau understands the complexity of Celestine’s position, of the discrepancy between the woman’s self-worth and the dictates of her class. Hers is a far trickier method of navigation, catering to her boss’ and giving them what is required, but also withholding a little of herself for her herself. 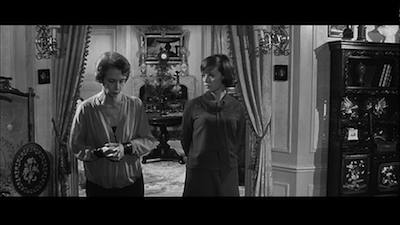 The Buñuel Diary of a Chambermaid updates the setting of Octave Mirbeau’s turn-of-the-century novel, placing it in France post-World War I, amidst racial turmoil and the nascent fascist movement. Celestine has left Paris to join a wealthy country house, primarily to cater to the elder head of the estate, Monsieur Rabour (Jean Ozenne). She quickly finds that all is not as it seems. Money here does not equal culture, but the pretense of such. Rabour’s daughter, Madame Monteil (Francoise Lugagne), is stingy and demanding, while her husband (Michel Piccoli, Belle de jour [review]) is distracted and horny. As the neighboring maid, Rose (Gilbert Géniat), warns Celestine, the madame will fire you and the monsieur will leave you pregnant.

As was his wont, Buñuel once again set out to dismantle the façade of bourgeois society. For all their airs, the moneyed folk are dysfunctional and prone to sinful peccadilloes. Monsieur Monteil can’t get what he wants from his wife, so he goes elsewhere. Madame Monteil, ironically, is almost another kind of madam, acting as an indirect procurer for her husband and a direct one for her father. Rabour made his trade as a cobbler, and he now has a shoe fetish--as Celestine is soon to find out--and he needs a model for his wares. (Unlike the Renoir film, which was shackled by 1940s moralism, this Diary of a Chambermaid doesn’t need to couch its sex or its politics under layers of euphemism. Buñuel even takes a poke at religion, giving us an ineffectual, moneygrubbing priest who takes his lord’s name in vain at the first sign of an obstacle.)

Given the political climate throughout Europe in the 1930s, and the existing class conflict in the narrative, Buñuel could have created an either/or scenario here, with the working class painted as the heroes poised for a revolution. The groundskeeper for the estate actually speaks of one, and he seems to see a new day for men like himself, but the Joseph in this version, played as a brute and a rapscallion by Georges Géret (Z [review]), is never mistaken for a hero. His revolution is a nationalist one. He is a racist and an anti-Semite who wants to take France back “for the French.” Buñuel shows Joseph for everything he is, and bitterly so. He is an elusive figure, escaping his deserved fate. When a local girl is raped and murdered in the woods, Celestine is convinced Joseph had something to do with it, but she can’t prove it. She can’t even frame him for the crime. 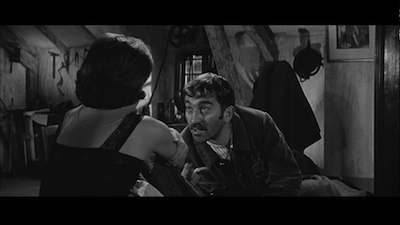 Unless I missed it, Diary of a Chambermaid ends without ever really telling us who the killer is. There is at least one other suspect, and for a time, Buñuel lets us believe he’s the one, only to surprise us by revealing whom we thought to be the next victim is still alive. The true identity of the murderer doesn’t really matter, though. The death of this innocent is meant as a symbol. Her killing is representative of the dark cloud that was on its way, one that Buñuel was caught under and persecuted by in his youth. Though she is killed off screen, we know exactly what happened to her by how Buñuel and director of photography Roger Fellous frame her body when her death is revealed. It’s a foreboding image, alluring and repellent at once, as the girl is returned to nature and nearly blends in with her surroundings, the snails she was out hunting for supper crawling over her lifeless skin. 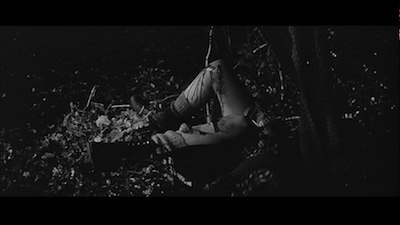 Thus, Joseph heads off to be divisive, denied the love of Celestine, who then, by some irony, becomes a unifying force, ending the feud between Monsieur Monteil and his neighbor, the old soldier Captaine Mauger (Daniel Ivernel), by marrying the elder man. Now the neighbors are friends, and Mauger even reverses his positions, blaming his past consternation on the attitude of Madame Monteil and declaring her husband, the man he once called a “dirty jew,” to be a righteous dude. Slyly, Buñuel adds another layer of irony. Our last image of Celestine is of her in bed, eating breakfast, and ordering Mauger to take away her food. She has become the Madame. 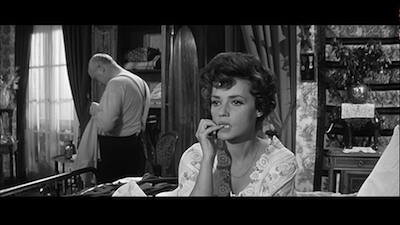 At the same time, she has already grown bored. It’s the second time we’ve seen her as such. Prior to that, at what is pretty much the dead center of the film, we witness what I would call Diary of a Chambermaid’s pivotal moment: a yawn. While old Rabour fusses with her boot and waxes poetic about how he will polish it, Celestine is barely able to stifle her disinterest. This is Jeanne Moreau’s masterstroke. She shows that Celestine is above all of these petty things, above the jealousies and the base desires and even the seemingly silly politics. She belongs elsewhere, she’s not just not sure where. That restlessness creeps back in at the end. She realizes that Mauger’s home is not her own, and as it’s immediately juxtaposed with Joseph and a fascist march, we can extrapolate that France is no longer her home either. 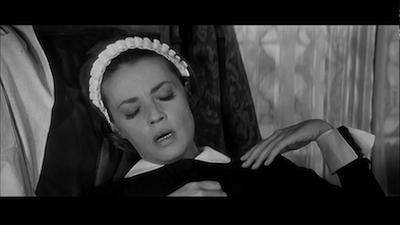