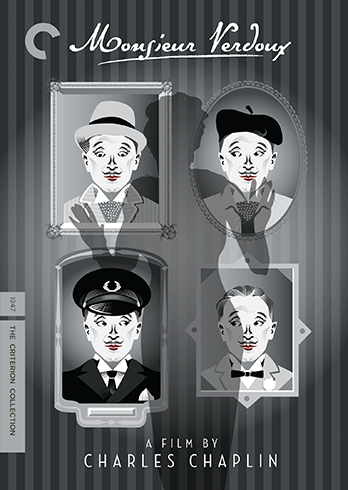 Writer/director/star Charles Chaplin moves on from his Little Tramp persona and embraces something entirely new in the darkly comic Monsieur Verdoux. Based on the story of a real-life "Bluebeard," and working from a script idea by Orson Welles (who originally was going to direct), the master filmmaker polished an odd little gem in this 1947 Oscar nominee. It's not exactly a gutbuster, but Monsieur Verdoux has a jaunty likability that works in concert and in opposition to its murderous intent, and proves as impressive and thought-provoking as Chaplin's previous effort, The Great Dictator [review].

The titular Verdoux is a former banker who, in the early days of the Great Depression, found himself unemployed. In order to keep his paraplegic wife (Mady Correll) and their son (Allison Roddan) in their home and the life they are accustomed to, Verdoux has taken on a new career: that of a bigamist and gigolo. Adopting several different aliases, Verdoux fleeces multiple women in various French towns, juggling each like a traveling salesman visiting his different accounts. For instance, there is the loudmouth lottery winner Annabelle Bonheur (future denture-cream pitchwoman Martha Raye), who thinks Verdoux is a ship captain who only comes to port every six weeks. There is also the absent Ms Couvais, one of Verdoux's early victims. It's her large family that will doggedly pursue the crook, suspecting foul play. Never mind that the Couvais family is self-serving, bickering, and altogether disagreeable. Then again, you should mind, that's part of Chaplin's point. 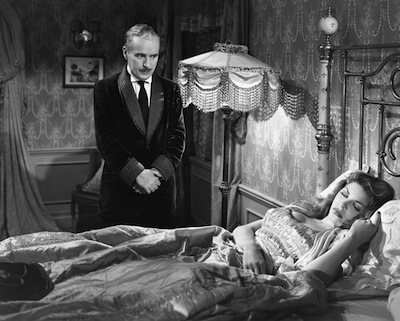 Monsieur Verdoux is an unconventional morality play. Its lack of any strict "crime does not pay" sloganeering rankled Hollywood censors, even as Chaplin worked in different story elements to placate them. Verdoux is a scoundrel and a villain, and yet, he has his reasons for the evil that he does. Chaplin plays him as a charming Don Juan with a heart of gold beating underneath his opportunistic veneer. The auteur stacks the deck in favor of those whom Verdoux cares for. His family has had bad breaks, and when the killer encounters a young woman down on her luck (played by Marilyn Nash), he empathizes with her misfortune and spares her a sinister experiment he has been planning. Conversely, the women that Verdoux bilks are genuinely distasteful. Bonheur is a loudmouth and a boor, while Marie Grosnay (Isobel Elsom), the rich older woman who rebuffs Verdoux's advances for the bulk of the film, is a real snob. Is Chaplin challenging our own perceptions by offering us victims whom we won't mind seeing meet their untimely end? 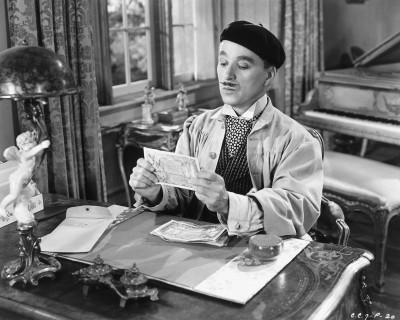 I would say yes. For as with The Great Dictator and many of his earlier silents, Chaplin is as interested in reflecting on society's ills as he is in making his audience laugh. If Monsieur Verdoux is less popular than his previous endeavors, it may simply be that the latter concern takes a backseat in order to put a finer point on the commentary. As Verdoux's scheme runs its course, he doesn't so much defend all that he has done as implicate everyone else as accomplices. His argument is that, in a time when man's greed has allowed so many to go hungry, where everyone selfishly fights to preserve their own creature comforts without a care for their neighbors, no man is truly innocent. On the contrary, Verdoux himself is a necessary scapegoat. His crimes allow the rest of society to toss its collective guilt in his direction.

It could have been heavy-handed, but the turn actually comes off as rather ingenious. As proof of his argument, Chaplin gives us the girl whom Verdoux inadvertently assisted. His kindness allowed her a second chance, and she returns to his life to repay him when his own luck takes a downward turn. It's a simple but effective message: do unto others as you'd have them do unto you. While it may not have the same gory impact as the object lessons of a standard crime film, where a killer like Verdoux would be gunned down in the street, Verdoux throwing himself on the court of public opinion in the final act does basically serve as a kind of redemptive sacrifice. If the plot developments inspire any unease, it's born of the fact that he's essentially right, and you really don't have to be all that cynical to agree. 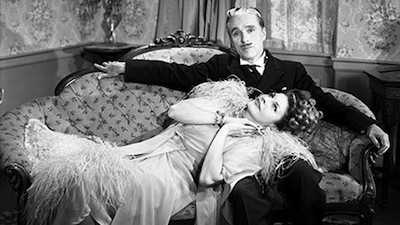 The fact that this weighty material is crafted with such a lithe hand is a true testament to Chaplin's talents as a performer and a director. Monsieur Verdoux is his first genuine talkie, and he embraces that chattiness with full vigor. While there are still a few hysterical slapstick sequences--namely, his tumbling out a window when meeting Grosnay, or the shenanigans on the boat when he's trying to drown Bonheur--they are nowhere near the extended, balletic, dialogue-free material that made The Great Dictator such a joy. There are no long stretches where actors aren't speaking. Hell, there are barely short stretches. Chaplin doesn't need to be tripping over himself or mugging for the camera to command the screen, he is just as capable playing it straight. Though, I was amused by the fact that, from time to time, you can catch him looking toward the audience as if to double-check if we're still in on the joke. 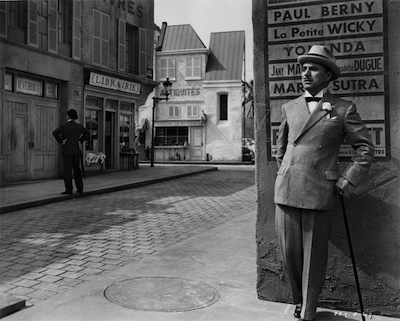 By the way, this might make a great double-feature with Unfaithfully Yours.