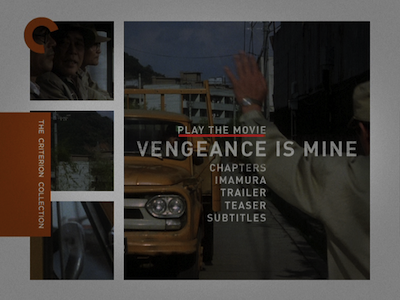 After spending the early 1970s making documentary films detailing the displacement felt by many varied Japanese citizens following World War II (beginning with his landmark A Man Vanishes, ending with Karayuki-san, the Making of a Prostitute [both reviewed here]), innovative director Shohei Imamura returned to narrative storytelling with a film that is as cold, calculated, and irreverent as its subject, a sociopath as lost and disappointed as any of the veterans or victims Imamura profiled in his nonfiction work.

Reality is also a basis for Vengeance is Mine, though the presentation of the facts is a bit fast and loose. Masaru Baba, who also wrote the existential yakuza picture Pale Flower [review], based his screenplay on a true crime novel by Ryuzo Saki. The story follows killer Iwao Enokizu (Ken Ogata, Mishima [review]), a small-time con man who went on a five-person killing spree, eluding police for over two months. Vengeance is Mine begins after he has been arrested, and it follows a circuitous route through his confession, weaving around different points in the investigation, backtracking to cover the killer's history, and also splintering off to follow what happens to his immediate family and two women, a mother (Nijiko Kiyokawa) and daughter (Mayumi Ogawa), who run an inn where Enokizu ends up staying. There, he poses as a professor. In one of his other assumed identities, he is a lawyer. In reality, he is nothing so erudite. He is a common laborer with pretensions of something higher. Before he turns homicidal, Enokizu is actually working as a truck driver. 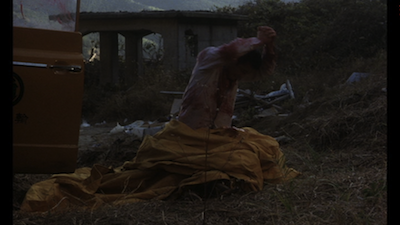 Two other truck drivers are his first victims. One of them he knows, the other he doesn't. He kills them without much emotion, immune to their pleas for mercy, improvising the deaths as he goes. There is a comical pause between the separate slayings when Enokizu goes to buy a knife for the second man. When faced with more than one option, he opts for the cheapest blade. No use spending more than necessary. There is a haphazard practicality to all the murders. His third victim seems to mostly be chosen because Enokizu can hide in the old man's apartment. Another macabre joke: Enokizu befriends this man, a real barrister, pretending to be visiting the jailhouse to buy property from a prisoner. The lawyer offers to help broker the transaction. 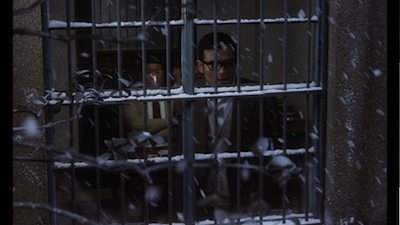 He chooses the last of his five victims for a variety of reasons: he has worn out his welcome at the inn, they've gotten too close and/or know too much, and, by the looks of it, an irresistible compulsion takes command of his faculties. Also, as Iwao himself explains it, these women, and really all the victims, posed no threat, and thus they were ideal targets. The pathology of this serial killer, pointed out both by his father (Rentaro Mikuni, Harakiri [review]) and the mother of the inn's proprietress (who in years past committed murder herself), is to only go after victims who offer no resistance and who have done him no real offense. The armchair psychology would be that a young Iwao Enokizu, having witnessed his father humiliatingly kowtow to a bullying naval officer, lost faith in Japanese authority, yet became psychologically crippled by the experience. He is impotent to attack anyone who wields any power over him, meaning that he can't even strike back at the one person whom he really wants to destroy: his old man. Father Enokizu gives him plenty of reason to want him dead. Theirs is a complicated relationship with Oedipal overtones, exacerbated by an overly close connection between the older man and his daughter-in-law (Mitsuko Baisho). 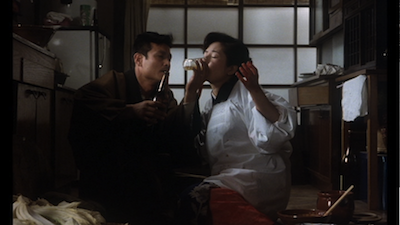 Where then is the vengeance? Enokizu's rampage is one with no obvious purpose. His victims are chosen at random, their deaths prove no point. When the cops press him, the killer has no great statement to make, he's not even really interested in explaining himself. He's ready to accept the death penalty, his run was basically an elaborate "suicide by cop" scheme. I suppose one could argue that this dishonorable death is a repudiation of the old ways, of the near-mythic image of samurai self-immolation. Yet, my interpretation is that Enokizu's intentions are both more broad and more personal, and his success is revealed in the bizarre coda at the end of Vengeance is Mine.

Picking up the story five years after the murders, Imamura shows us the father-in-law and Enokizu's wife, Kazuko, heading up a mountain to discard Enokizu's bones. He has been excommunicated from the Catholic church--a fact Imamura reminds us of by showing a group of nuns in the aerial tram going down while the elder Enokizu and Kazuko are in an opposing tram going up (ironically)-- so Iwao can no longer be buried in consecrated ground. Instead, his surviving family decides to toss his bones from the mountain. Only, every time they throw one bone out, it freezes in mid-air, hanging there, never dropping. It's a metaphor for all the damage he has done to them. He has ruined the Enokizu name, destroyed their reputations, upended their lives, ensuring that they will never be free of him. True happiness will always be denied his so-called loved ones, because they'll never escape the terrible crimes he committed. 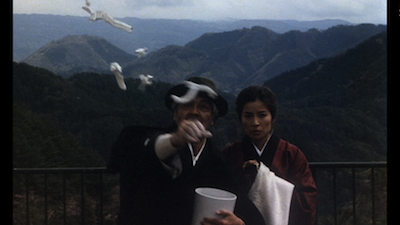 Backing up for a second, though, it's worth considering this idea of the murder spree as an elaborate suicide. In his final conversation with his dad, the same conversation where Iwao Enokizu finds out that he has been kicked out of the church, he also rejects God. He says he has no need for God, implying that he has taken over the role of Supreme Being himself. "'Vengeance is mine,' sayeth the Lord;" except now Enokizu has claimed vengeance as his own. From an existential standpoint--though a particularly bleak reading of the philosophy--he is asserting his true essence as a man by rejecting the boundaries of outside morality, breaking common law, and accepting the consequences. Like in Albert Camus' The Stranger

, when Meursault kills the Arab. Imamura's film is divided into the same basic narrative chunks as Camus' novel: during the crime and after the crime. Though where Camus splits them evenly, Imamura shuffles them up. 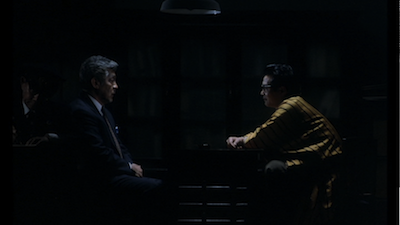 The way Vengeance is Mine is put together is strangely dichotomous. The film is anarchic, yet it has the exacting approach of a procedural. Imamura is quick to orient his audience in the timeline, giving us dates and catching us up on developments via title cards. There is very little abstraction, most of the film is shot with a straightforward aesthetic, it's only in the editing that things get jumbled. (The photography is by Imamura's regular cameraman Shinsaku Himeda; the cutting is by Nagisa Oshima's editor, Keiichi Uraoka.) As I suggested at the outset, though, this reflects the personality of the protagonist. The timeline is scattered, but there is also a clarity. Iwao Enokizu kills on impulse, but he is increasingly exacting. 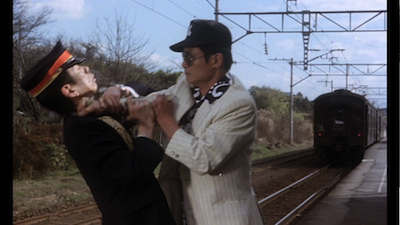 Ken Ogata turns in an outstanding performance as Enokizu. He is charming, even when unhinged, ready with a laugh and possessed of a gift of gab. At the same time, he moves as if there is always a forcefield around him, as if he is aware of every atom darting around his immediate vicinity. Passion only ever overtakes him when he is having sex, when he indulges his animal nature. Actually, it might be that sex is another outlet to impose his will on a victim who has done him no harm, though this time one that willingly accepts his punishment (even if it's for money). It could be telling that the one person who fends him off is the mistress who, when he tries to get rough with her, threatens to cut his testicles off, sending him running. 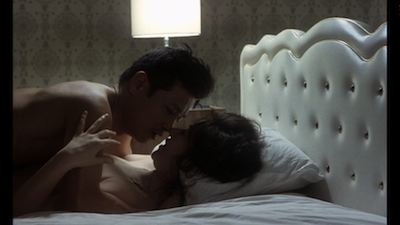 It's also telling, and eerily apropos, that this fugitive should, at a crucial point in Vengeance is Mine, be exposed by cinema. The last piece of the puzzle is Haru, the woman from the inn, discovering the truth, and she does so during what is maybe the only romantic sequence in the film. They are on a date, out at the movies, and the newsreel shows her the real face of her companion. It makes me think of the famous story of John Dillinger being tracked down and shot while taking in the flickers with his girl. Though no cops wait for Enokizu outside the theater, he is seen by a second person, an agent of the law, whom he has lied to when he rejoins the throngs of people on the streets of Tokyo. It's the cinematic truth that Imamura has been hunting for. In the motion picture era, the camera will always see you, and the audience will be there waiting to peep on your undoing. 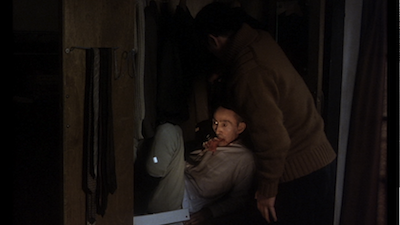 Note: I have now also published a follow-up review for the 2014 Blu-ray edition.