The year is 1630. The capital of Japan is still under its original name, Edo, and though samurais still exist, the shogunate has severely lessened their power. An older, bearded swordsman appears at the gate to the estate of Lord Iyi, a still thriving patriarch. Having lost his own master, this samurai has been a ronin for many years. Tired of eking out a living and only finding starvation for his efforts, he requests that Iyi's men let him use the spacious courtyard of their compound as a place to commit ritual suicide, formally known as "seppuku" but also called "harakiri." Indeed, the original title of Masaki Kobayashi's 1962 film was Seppuku in Japan, but it was likely changed to Harakiri for international release as that is the more commonly known term worldwide.

Respected Japanese actor Tatsuya Nakadai stars as Hanshiro Tsugumo, the swordsman at the end of his tether looking for an honorable death. Rentaro Mikuni is Counselor Saito, the man charged with managing the daily goings-on at the Iyi manor. Saito is suspicious of Tsugumo's motives, as it has become commonplace for ronin to show up at rich homes claiming to be seeking a place to die but really looking to extort money from a well-to-do family who doesn't want the public disgrace of a dead warrior in their front yard. This scam began honestly, when one of the many samurai left in the cold by shogunate reform legitimately sought a nice place to spend his last breath. The clan he went to was so impressed by his sincerity, that they gave him a job; those who followed this have been con artists. In fact, Tsugumo is not the first to come to the Iyi manner seeking this kind of asylum. Several months before, a younger man named Chijiwa (Akira Ishihama) arrived under similar circumstances. Saito and his men doubted his intentions, too, but ultimately, they made him carry out his promise. Chijiwa's tortuous death is the grisliest scenes in the movie, and Saito's detailed explanation of the disembowelment--which we see as an actual flashback--is meant to dissuade Tsugumo from pushing the matter further. The audience may be unsettled by the painful self-immolation (I certainly was), but Tsugumo is not. He insists on going ahead, his desire to die is very real.

Harakiri's twist, however, is that despite his true intentions, Tsugumo has not revealed his full motivation. The former warrior was a father and a grandfather who watched his family's livelihood dwindle as he clung to an unyielding code of honor--one he has decided that others higher up the food chain have not been as dedicated to. His narrative is more entangled in recent events at the Iyi manor than was originally apparent. The reality of what is happening grows more knotted and tragic the deeper Tsugumo draws us in. The movie may be black-and-white, but its often-grotesque tapestry is anything but. The hubris of the Iyi clan is they demanded simplicity because it was easier for them to deal with, even though life is far more complex. 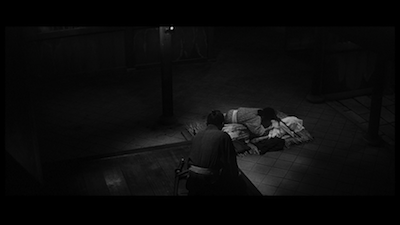 Tatsuya Nakadai is astounding in the lead role. He plays present-day Tsugumo as a man who is staunchly resolute. He quietly commands the room, wresting control from Saito in ways both bold and manipulative. When insisting that the counselor and his retainers continue listening to his story doesn't work, he has other gambits waiting to be played. In the flashbacks, the actor is afforded the opportunity to show his range. Tsugumo's life swings from happiness to heartache, and the unraveling of his confidence is devastating to behold. The performer shows just as much strength in the battle scenes, finding a balance between an old warrior's confidence and his somewhat faulty muscle memory. He is not as strong or as agile as he once was, and Nakadai is careful to show, through gesture and expression, that it's righteous passion that allows this samurai to not just hold his own, but to best his opponents. Fans of Japanese cinema likely know Nakadai from his work with Akira Kurosawa, including High and Low [review], where he proved himself more than an able co-star next to the great Toshiro Mifune, but also later in life as the unhinged father in Ran [review]. It's an impressive career even before you factor in his previous collaboration with Masaki Kobayashi, the towering epic The Human Condition [review]. Comparing that multi-part drama with this one is a bit like comparing apples and oranges, but they both stand tall as portrayals of individuals pushed as far as they can be pushed. It's a dramatic situation both timeless and timely: when the system fails to protect the people it was created to serve, when those at the upper levels of power forget about individuals that form the basis for their rule, those desperate for justice will find a way to get their due. Not that any victory is clean. Following a harrowing, tension-filled climax, Harakiri has a bitter denouement. The cynical message: if you're going to strike at a snake, you'd best take out the head, or its venom will still have an outlet to poison the world further. Kobayashi works here from a script by Shinobu Hashimoto. The film is tightly constructed on two different timelines, and the writer makes smart decisions of when to click back and forth between past and present. In some ways, Harakiri is like a mystery. We know, in essence, who killed Chijiwa, but the metaphorical culprit, the source of the misery that led him to the murder scene, still needs to be uncovered. Cinematographer Yoshio Miyajima works in the tight hallways of the palace and even the tighter quarters of Tsugumo's impoverished hovel, to choreograph the narrative and emphasize just how trapped the ronin really is. The courtyard where the suicides take place boxes the victims in, and yet the estate that surrounds them is like a maze. On his climactic dash through the Iyi home, Tsugumo breaks through different walls, each one revealing another layer of the internal bureaucracy. As a metaphor for the lone citizen taking on the system, it's incredibly powerful. What Tsugumo finds there is ultimately hollow, and thus Harakiri is all the more unnerving. If you don't walk away from this movie shaken all the way down to your shoes, I'm not sure you were really watching what was going on. Criterion first released Harakiri back in 2005 as a two-disc DVD set. As the screengrabs here show, the restoration done back then was impressive enough already, but the high-def Blu-Ray transfer is a thing of beauty. The black-and-white photography is sharper than ever before, with rich, deep detail and incredible textures. Close-ups on the actors in tense moments reveal so much about the pain and fear the characters are suffering just by letting us see the sweat on their brow and the tears in their eyes so vividly.

The new edition also keeps all the extras from the previous set, including an interview between Masaki Kobayashi and Double Suicide-director Masahiro Shinoda (that makes for a fitting duo, if not a depressing double feature). There are also more recent interviews with Nakadai and Hashimoto and a pretty cool poster gallery. There is a 3D remake of Harakiri on the way, helmed by irascible Japanese madman Takashi Miike. It will be interesting to see how Miike handles the material. I'd have thought him a pretty poor choice for Harakiri--and really, would have been against remaking what is essentially a perfect film--before seeing his masterful redo of the samurai showdown picture 13 Assassins [review]. The concept of ritual suicide certainly has the potential for different avenues of exploration. Let's not forget that just three years after Kobayashi stormed Cannes with Harakiri, bad-boy author Yukio Mishima unleashed his short film Patriotism [review], a film that is just as vivid in its gruesome details but with a decidedly different point of view. Whereas Kobayashi decides that seppuku is an empty gesture given foolishly in deference to an uncaring power structure, Mishima considers it the ultimate expression of fealty to something greater than yourself (for him, Japan). Both films are effective, though ultimately, Kobayashi's is more fulfilling and easily more persuasive. Please Note: The screen captures used here are from the standard-definition DVD released in 2000, not from the Blu-ray edition under review.