"Your genius lies within..." 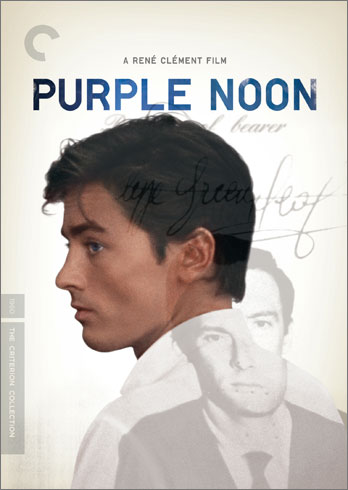 For what is basically a crime thriller with a very average plot, Purple Noon (Plein soleil) is a film that happens almost entirely on the interior. Though René Clément's 1960 adaptation of Patricia Highsmith's novel The Talented Mr. Ripley

has plenty of action--there are two murders and a meticulous flight from justice--all the important stuff happens behind Alain Delon's piercing blue eyes.

Delon stars as Tom Ripley. He was the first, ahead of Dennis Hopper, Matt Damon, and John Malkovich. He is arguably the best, at least for the iteration of the character this early in his criminal career, an empty vessel waiting to be filled, a chameleon looking for a new color palette to imitate. Delon plays the con man with a near absence of personality, alternating between a cold blankness and an almost childish petulance. For the early part of the film, when he carouses with his target, Philippe Greenleaf  (Maurice Ronet, The Fire Within [review]), they act like hormonal teenagers, giggling and pulling pranks and making nuisances of themselves. The seemingly homoerotic link between them is more predatory than sexual. Tom is already shadowing Philippe, sticking close to gather inspiration, his gaze recording information to mimic. To the unknowing eye, it looks like male one-upsmanship at its worst. When the pair pick up a tourist out on the town (played by Viviane Chantel), they paw her from both sides, hoping to secure her attention. 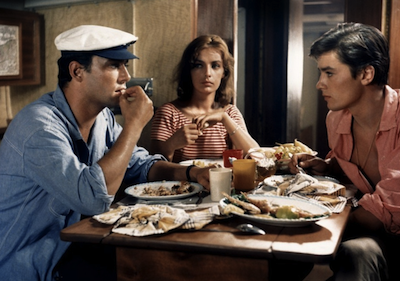 The caginess of Ripley's technique only becomes evident when cornered. Philippe confronts him, knowing the mooch is up to something, having seen Tom mimicking him in the mirror and finding his bank statements in Tom's things. Tom doesn't deny it. Instead, with a steely resolve, he tells Philippe what his plan is. Philippe is the perfect victim. He is perversely intrigued by the whole thing, and also so self-absorbed, he believes Tom would never do it. He's the invincible Greenleaf!

It's an odd twist I had never really considered before. Clément gives us an entirely unsympathetic murder victim, so that no one is sorry to see Philippe go. Ronet plays him as a bully. It's all there in the script by Clément and Paul Gégauff. Though Purple Noon is refreshingly lacking in psychobabble and explanations, that doesn't mean it's lacking in psychology. Philippe is the classic abusive boyfriend, lashing out at his fiancée and then immediately apologizing. Marge is played by Marie Laforét, and though she fights back, she always relents. No writer can watch Philippe toss her handwritten manuscript in the ocean and believe that she would ever take him back. And yet there she is. For his part, Tom lets Philippe be cruel to him because it's the rich kid's one true talent. Observing how he does it is essential. 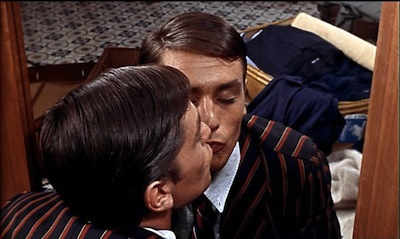 Tom working his way up to kill Philippe makes up the first third of Purple Noon. The second third is his adopting Philippe's identity, forging documents and laying an elaborate trail that both establishes a new life and keeps shaking everyone else off the scent. The last third follows another murder, an unplanned slaying to keep from having the truth exposed. To cover that crime, Tom must kill Philippe again, making it appear that the killer has fled from justice and has committed suicide out of fear and guilt. This ends up being Tom's most masterful move, however: the new opportunity opens up the vault. He can take everything of Philippe's now, not just what he had on him in travel, but his full fortune...and also his romance. 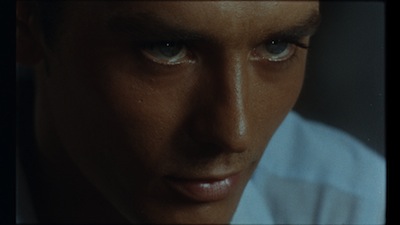 In Purple Noon's creepiest scene, we learn that this is perhaps what Tom wanted all along. The ultimate theft, the ultimate assumption of roles: he will take Philippe's place with Marge. Here, the abusive triggers work to aid him. He whispers to Marge in her sleep, imitating the man she thinks she's lost, only to have her see the truth on awakening. Yet, this is the hidden key. Just as sure as the metal key in the cubbyhole by the door is how he got into her bedroom, this ruse will let him sneak into her affections. The delivery of harsh news, that Philippe never loved her, shows he can be as callous as she's used to, and then he provides her the comfort she seeks, mimicking the familiar pattern. Philippe never loved her, but Tom always has. Get the girl, get all the money, step into the dead man's shoes. A woman finally chooses him over Philippe, the tourist looks his way at last.

René Clément hasn't so much created a suspense thriller here or a whodunit as he has a "how will he do it." Ripley's success is, for the most part, a foregone conclusion, so we're intrigued to watch him lay out his pieces and then follow along as others, including a sharp police inspector (Erno Crisa), figure out where they all fit. Purple Noon is as colorful as a Hitchcock picture, but its view of mankind is as dark and cynical as a film noir. Clément has created something in between. Henri Decaë's lush color photography provides a bridge from the black-and-white of yesteryear (he shot more traditional French noirs like Elevator to the Gallows and Bob le flambeur) and the redefining of genre that was just around the corner (Le samourai and Le cercle rouge [review], both for director Jean-Pierre Melville, and both featuring Alain Delon). He uses primarily solid colors here, the Technicolor equivalent of light and shadow, creating shapes and angles. The most flamboyant use of patterns are on shirts that give Ripley away. The striped coat that Philippe catches him wearing becomes his disguise in his final gambit. On the flipside, a solid white shirt with Philippe's initials are what tips off their friend Freddy (Bull Kearns) to Ripley's scheme and leads to the second homicide. It's an omen Ripley doesn't pick up on: there's no coverage behind a blank canvas, you will be seen. 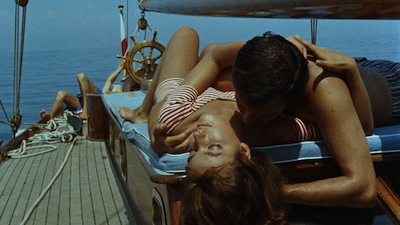