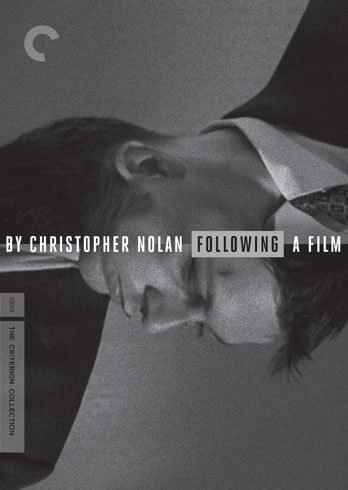 An unnamed "young man" sits in front of a police officer and tells his story. It's a knotted tale, one that jumps through time, features inconsistencies, and arguably, from a narrative standpoint, if he really is a first-person narrator, includes scenes he couldn't possibly be privy to, not without toppling the house of cards he doesn't realize he's trapped in. But for the sake of this review, we'll pretend I'm not a stickler for such things. Plus, I basically liked Following, Christopher Nolan's 1999 debut, so why get hung up on its main cheat?

The accused (played by Jeremy Theobald) is an unemployed would-be writer who has a hobby: he picks random people in a crowd and follows them to see where they go and what they do. Though he begins this practice by establishing a rigorous routine--namely, you only follow someone once, and then you move on--after a while, he begins to repeat certain targets. One of these repeat customers, a well-dressed gentleman named Cobb (Alex Haw), notices he is being tailed and introduces himself in a diner. Turns out, Cobb's a petty thief, and like his shadow, he has his own unique way of doing things. Cobb takes the guy along and shows him the routine. He likes his burglaries to be an interruption in the life of the victim. He takes things he can carry, like compact discs, but his main goal isn't profit, but rather to make the burglarized realize they have been messed with. He likes to up-end their personal items, to spread them around, to shake the flat owner's sense of security. 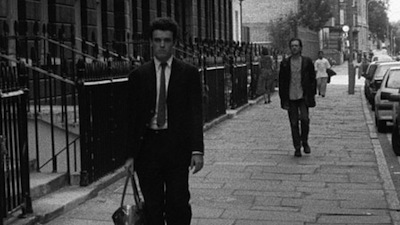 As we witness this training scenario, Nolan--who wrote, edited, and shot Following, in addition to directing--gives us glimpses of the future before the young man got pinched. He got involved with a woman (Lucy Russell) that he and Cobb robbed, and starts to be sucked into her world. She is a former gangster's moll who has reason to fear her ex. At some point, the young man also got beat up, and the reason why is part of the mystery. 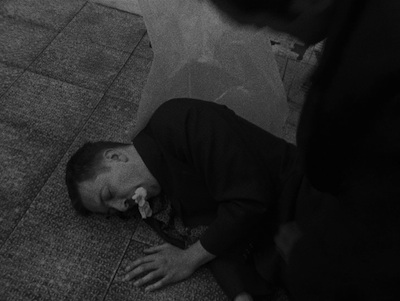 Anyone who is familiar with Nolan's non-Batman films, such as Memento

and Inception [review], know that the director has a penchant for jumbled narratives that bend back on themselves and keep the audience guessing all the way through the movie. Following is the early blueprint for this technique, and so digging too far into the plot will only serve to unravel it for the first-time viewer. At the same time, there's also not much here to unravel. The plot, when presented on its face, is not all that complicated (though if you get confused, I guess you can watch the version put in the correct chronological order that's included on this Blu-Ray). One or two cards are held to the vest up until the very end, but Nolan isn't pulling that big of a sleight of hand. The truth behind much of the scheme is exposed about mid-way through.

In all honesty, Following has really benefitted from what the director has gone on to do next. In many ways, it is not unlike Wes Anderson's Bottle Rocket [review], Paul Thomas Anderson's Hard Eight, or particularly Darren Aronofsky's Pi

in that it is quite literally a low-budget test, a warm-up of all that is to come. Regardless of your particular affection for any of these films, they are all the least interesting of the individual auteur's oeuvre. Following is an entertaining crime yarn, and Nolan squeezes every penny out of his meager budget, but were this not a movie by the director of The Dark Knight [review] or The Prestige [review], there's a good chance none of us would be talking about it right now. To call the characters underdeveloped would be an understatement. Even for an exercise in genre such as this, where a writer can get away with just showing types, these guy are particularly flat, doing little more than servicing the concept (which is good enough to make this cinematic caper come off, regardless). There also aren't enough pieces here where I think repeat viewings will reveal all that much more than you might have gotten the first time. If one were to do an infographic illustrating the plot, it would probably be one-tenth of one percent of the size of Inception's. 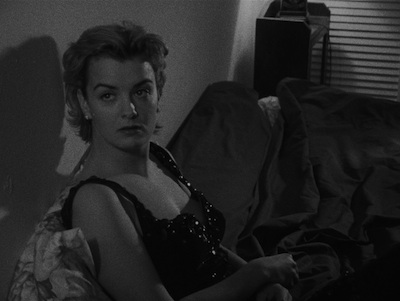 That said, for the undistinguished kid brother of the Nolan filmography, Following gets the full red carpet treatment from Criterion. The high-def transfer looks amazing. I really dig seeing black-and-white films on Blu-Ray, and Following's gritty cinematography looks even grittier in 1080p. Fans of Nolan (of which I consider myself one) will also appreciate the inclusion of his short college film, Doodlebug, made two years before the main feature and also starring Theobald. Though a scant three minutes long, it's a well-executed concept, simple and to the point, with a clever punch line. 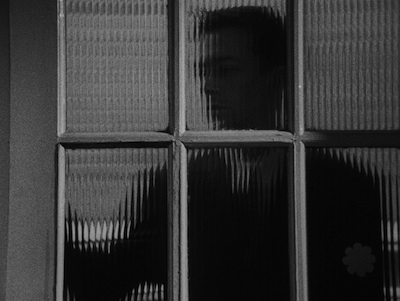 Please note: The images used here were taken from promotional materials and other sources, not directly from the Blu-Ray.