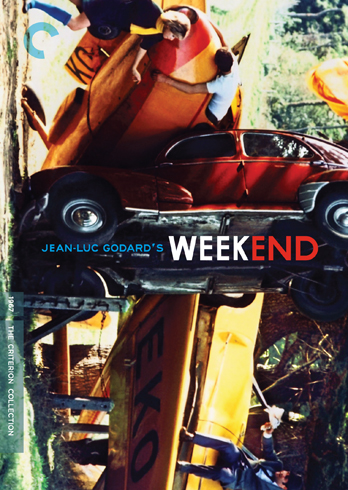 Weekend, Jean-Luc Godard's incendiary 1967 farewell to motion pictures as he knew (and redefined) them, gives new meaning to the term "road rage." Most of the picture takes place on the highway as city dwellers head to the country for weekend getaways. Except, rather than heading toward some kind of bucolic idyll, what awaits them are traffic jams, accidents, and violence. In Godard's vision of the late 1960s, citizens have come to value their cars more than their lives, and they use the vehicles as weapons. They are status symbols that tell others who you are--the wealthy drive fancy roadsters, men who work drive trucks and tractors--and people vie for social positions the same way they vie for a parking spot. 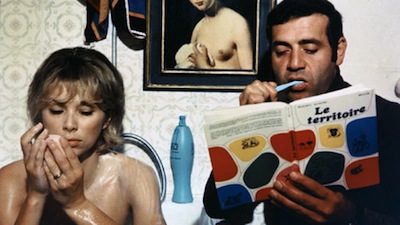 The focus of Godard's episodic polemic is, ostensibly, the Durands, a bourgeois couple in a loveless marriage. At the start of the film, both husband and wife--Corinne and Roland, as played by Mireille Darc and Jean Yanne--are each plotting with their lovers, making plans to murder the other. Corinne has convinced Roland to chance not fixing his brakes in hopes he'll crash and burn; Roland is waiting for Corinne's father to die so he can bump her off after she's gotten her inheritance. Their trip that weekend is actually to go visit her old man, who is on death's door, with the hope of staying in his good graces and preventing anyone from tampering with his will.

How the Durand's view life and their place in the world is immediately evident as soon as they encounter a line of traffic backed up on a two-lane highway. Roland unrepentantly pulls into the second lane and starts pushing his way toward the front, indifferent to the honking horns and angry shouts from the people he and Corinne are knocking aside. This is what the moneyed class do: they insist on their privilege. Godard has set up one long metaphor for society on this roadside. As the Roland's travel the line, we see people from all different walks of life, young and old, working class and middle class. There are trucks full of animals, representing agriculture. We also see signs of industry. Ironically, a Shell gas truck is trapped in the middle of the jam. Along the way, some have been run off the road, crashing into trees. One woman is going the wrong way. Another couple has given up and started playing checkers. A man hauling his sailboat can only dream of the sea. 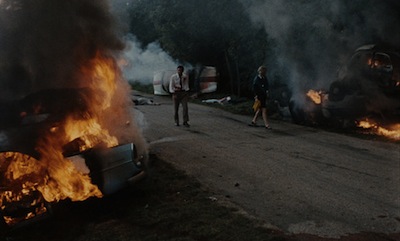 This long line of vehicles is probably Weekend's most famous sequence. Godard and his longtime director of photography, Raoul Coutard, have orchestrated the whole thing as one unbroken shot, the camera traveling alongside on its own unseen vehicle running through the ditch (be it a four-wheeled ride or some jury-rigged contraption on tracks, like what Coutard rides at the beginning of Contempt [review]). It's an impressive piece of choreography, and one of many ambitious shots that are peppered throughout Weekend. Some are more static than others, like the couple's fight with Jean-Pierre Leaud, which ping pongs between his car and the phone booth where he sings his side of the conversation (presumably to no response). Equally as impressive as the traffic jam set-up is a later scenario where a pianist sits in the middle of a town square explaining the enduring power of Mozart. As the impromptu concert progresses, townsfolk listen and go about their lives. Coutard slowly turns in circles, first one way and then the next, capturing the whole panorama. Tarantino would later lift this routine for the loquacious diner scene in Death Proof [review]. 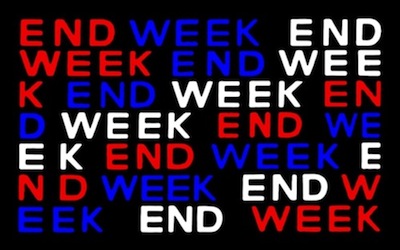 Weekend is less a movie about story and plot than it is a collection of experiments and exercises. Most of the episodes play as more refined versions of the similar political skits that Godard wove through his irregular Rolling Stones documentary Sympathy for the Devil

/One Plus One, and though the final title card declares that this is the end of cinema, it's really the beginning of Godard MkII, paving the way for his later output, creating a manifesto that he still adheres to, as evinced by his best efforts from the last decade or so, such as Notre Musique [review] and the more recent Film Socialisme [review]. Its structure and ideas represent his dissatisfaction with traditional filmmaking and his cohorts from Cahiers du cinema's complacent approach to the same, which he considers akin to the political left's inability to put their radical words into practice. It is, in a sense, his claiming the "right of way," while also embracing the "way of might."

Both notions arise within Weekend's varied anecdotes. At one stop, a worker in a tractor collides with a trust-fund kid's sports car. Amusingly, this fatal fender-bender occurs while the older man sings the virtues of unity via "The Internationale." The young driver is killed, his girlfriend is angry, and she keeps insisting that because they are rich and fancy, they had the right of way. He points out that his efforts in the fields feed France. It must have been with a weary heart that Godard decided on including the cruel joke that punctuates the scene: the only common ground these two people share is their anti-Semitism. "Might" is given lip service further into the story. After the Durand's have finally crashed their own car, they make passage by working on a garbage truck, an effective up-ending of cultural norms. As they gather up trash, the workers who have taken charge, one a black man and the other white (Omar Diop and Laszlo Szabo), share their belief that only a violent revolution is going to make a difference. The pacifism of the flower child movement is not going to cut it. As a symbol of their unity, the black man speaks for the white man, and vice versa, with Godard setting his frame on the face of the man being spoken for, not the one speaking, making their two voices one.

Weekend is basically a string of parables, an extreme take on The Decameron or The Canterbury Tales, or even Pilgrim's Progress: it's a journey that makes pit stops within more individual stories. Godard's script is a dismantling of consumerist culture and class politics, and civilization breaks down the farther the Durand's travel. In another ironic twist, they become less human the fewer automobiles there are running. Earlier, cars and other purchasable products and pop culture fantasies are shown to be more important than God--whom they have possibly met, though he's now a dangerous highwayman who has stepped straight from the Bible into an Alexandre Dumas novel--but once the Durand's lose their car, they are forced to barter with ideas. Give that they are short on ideas, they get stuck. It's a moment straight out of Beckett, with two vagabonds on the curb unable to conjure up any legitimate truth, brutalized for their own lack of purpose. 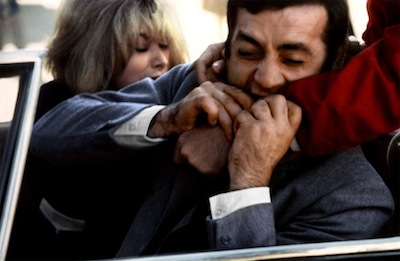 "The horror of the bourgeoisie can only be overcome with more horror."

The question that Weekend poses is a difficult one: as the class system breaks down, are people really becoming less human or is it actually more human? In the final act, the Durand's are taken over by true radicals who have reverted to a kind of primitive tribalism, complete with animal sacrifice and chants. It's the revolution of apocalypse, with people becoming the goods that are now traded and consumed. Yet, the point is made that, in its most natural state, mankind may be savage, but he is honest; it's the imposition of society, of organizing as a system, that alters our nature. We trade savagery for barbarism. 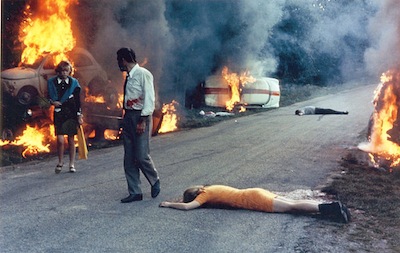 In terms of aesthetic goals, so too does Godard chisel away the imposed structure of more than a half-century of cinema to grasp at something more unfettered, more pure--though arguably more formalist and reflexive at the same time. It's rougher, but more honest. Weekend is getting closer to uncompromised communication. Take your ideas and throw them against the screen, and see what sticks. One could spend a long time mapping it out and picking at the intellectual nuggets that Godard has sprinkled along the trail, but the true experience is more visceral. The audience is meant to just watch, to travel along with the camera, and let the mis-en-scene work its own magic. It tickles at the base of your brain whether you realize it or not. It's what makes Weekend so subversive. It's unnerving and exciting, and for as close as even Film Socialisme got to replicating the results, there is really no second time. Again, this is the start and the finish, both its own thing and the connector between the past and the future. 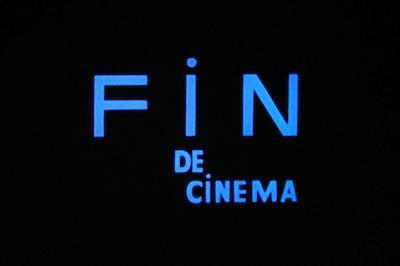 I'd only seen Weekend once before prior to this release. It was the New Yorker DVD release from 2005. It's been quite a while, but I remember even then there was disappointment that the transfer was middling, with soft colors and problematic resolution. No such issues will greet those watching the Criterion Blu-Ray. The new restoration, working with a massive 2K scan of the original film, is every bit as vibrant as Godard and Coutard intended it to be. Detail is rich, and colors really pop.

Criterion also rounds out the package with plenty of supplements, including archival interviews with the lead actors and French television footage from the set of the movie. There is also an illuminating new video essay by Kent Jones, and three articles in the booklet, including pieces of an interview with Godard conducted in 1969. 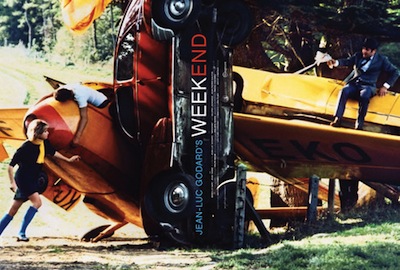 This disc was provided by the Criterion Collection for purposes of review. The above images are promotional stills and not screengrabs from the Blu-Ray under review.