A PATCH OF BLUE - CRITERION CHANNEL 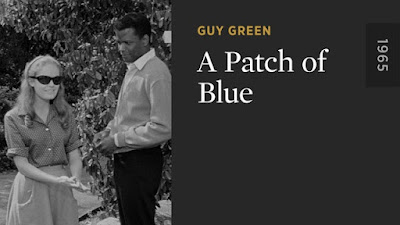 Sidney Poitier stars in A Patch of Blue, a different kind of love story, playing career man Gordon Ralfe. One day meets, Gordon a blind girl, Selina (Elizabeth Hartman, Walking Tall), in the park. After sharing a conversation with her, he realizes that she has not been educated to get along on her own. In fact, as he will ultimately discover, she lives with her alcoholic grandfather (Wallace Ford, in his last role) and her equally drunk mother, Roseanne (Shelley Winters, who won her second Best Supporting Actress Oscar for her work). Despite the fact that Roseanne was the one who blinded her daughter, she holds the girl's condition against her and makes Selina work like a slave around the house. Until recently, when Selina started convincing her kindly boss (John Qualen) and her grandfather to take her to the park, the blind girl had barely been beyond her apartment. She has no idea how the world works for seeing people, much less for the sightless.

Selina also has no idea that Gordon is African American. Her only encounter with anyone of a different race was a young girl who lived in her building whom Roseanne forbad her to play with, though it was never explained to her why. Thus, amongst the many things that are beyond her, Selina has no concept of race or racism. Gordon, on the other hand, is far too aware of the judgmental glances he and the white girl receive when they are together. Even his brother (Ivan Dixon) raises concern at seeing the two hanging out, seeing only trouble for Gordon. Gordon does his best to keep his feelings in check, extending an honest helping hand to his new friend, but Selina falls for him immediately. She has never been shown kindness, it's only natural. 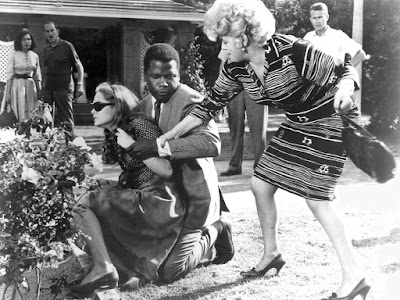 A Patch of Blue was written and directed by Guy Green, adapting a novel by Elizabeth Kata, and though the movie has strains of melodrama, Green also balances that with a tough realism. Selina's squalid existence is full of cruelty and hatred, and the director does his level best to show what production standards at the time would allow. He even pushed the boundaries of those standards by filming an interracial kiss shared by Poitier and Hartman. Though these scenes were excised from a lot of prints at the time, particularly in more racially divided areas of the U.S., A Patch of Blue is intact on modern home video releases.

The film manages to avoid getting too sappy, as Gordon keeps his head and makes the right choices for Selina, no matter how hard or bittersweet they may be. First-time actress Elizabeth Hartman rightly earned accolades for her portrayal of the blind girl. She is so convincing that I actually had to double-check that she wasn't blind in real life. Selina is an innocent in a harsh world, never entirely aware of the horrible things that have happened to her. Beyond the issues of race, Green seems to be indicting society more for its lack of compassion. How could Selina get through so much of her life without anyone ever extending a hand to aid her? The contrast between the world outside the apartment and inside is practically Dickensian, creating a sharp divide between the exploitative family relationship and the gentility of Gordon's care. The world outside the four walls of the apartment may still have its problems, but at least there is a possibility to advance. 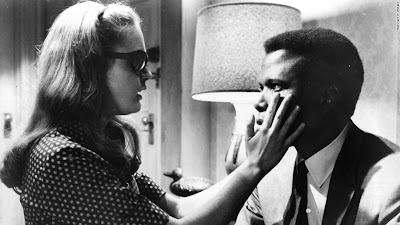