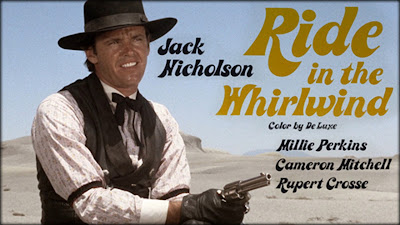 Made immediately after The Shooting in 1966 [review], Monte Hellman’s second western, Ride in the Whirlwind, lacks the existential poetry of his previous effort, but it searches for the same dread. This time around, the movie not only stars Jack Nicholson, but he also wrote the script.

For Ride in the Whirlwind, the star adopts the role of Wes, a world-weary cowboy traveling cross-country with two of his friends. Their journey starts with a predictive portent: a man has been hanged along their trail. Yet, the trio ignores the warnings, as well as all the other suspicious signs, when they come upon a cabin that’s been staked out by a gang of five gunslingers. They are hospitable to the strangers, most especially their one-eyed leader Blind Dick (Harry Dean Stanton), who offers them food and shelter, but underneath all the politeness is an obvious eagerness for the visitors to move along. They don’t. Not even when introduced to a convalescing man who is said to have fallen on his knife. You can’t get more obvious than that. 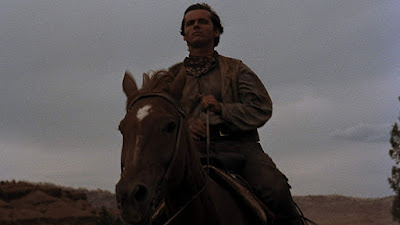 Things go from questionable to terrible the next morning when a posse chasing Dick’s gang arrives. They open fire on the cabin from the hills, and Wes and company are caught in between, having spent the night sleeping with the horses. It’s an ingenious set-up. The innocent riders are trapped, susceptible to bullets from either side, and with no way to distinguish themselves from the bad guys. Blocked from any easy escape, they are forced to head into difficult mountain terrain. One of their number (Tom Filer) is shot before he even makes it to his horse. Wes and Vern (Cameron Mitchell) have no choice but to flee on foot. Can they survive long enough to get beyond the violence and find horses to carry them to safety? 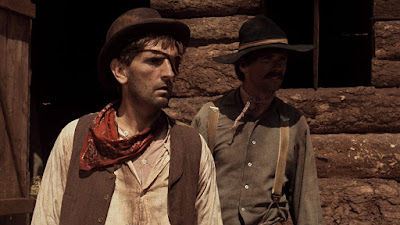 Ride in the Whirlwind is a tense 80 minutes. Even before the gunplay begins, there is palpable nervousness surrounding everything. Something bad will happen, it’s just a question of where it will come from, who will kick it off. The enclosed desert landscapes don’t provide much relief, with the horizon blocked off and a heavy wind consistently pushing against everyone and everything. Most film crews would shut down in such conditions, but Hellman makes the most of it. There is a punishing inevitability at work, Wes and Vern can only get so far.

The final third of the film is set on a small farm, run by an elderly farmer (George Mitchell) who is as tough as his life is hard. He lives alone with his wife (Katherine Squire) and his daughter, Abigail (Millie Perkins, returning from The Shooting). Vern and Wes take them hostage, with plans to steal their horses come nightfall. The presence of the young woman adds another layer of tension to the movie. The famer is afraid the men will harm her, and she seems intrigued by them herself. It’s perhaps the best example of Hellman’s technique of withheld release. Just as we waited for Dick and the outlaws to reveal their true nature back at the first cabin, we wonder here how this fearful anticipation will pay off, if our “heroes” will take further advantage. 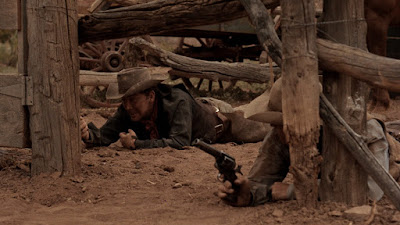 Because at this point in Ride in the Whirlwind, we are unsure of how much we should continue to lend our sympathies to Wes and Vern. Though we believe them to have been wronged, we don’t know them all that well when the attack happens. This means we aren’t clear of how good they really are, of how close the line has been when they cross it. They continue to insist they aren’t criminals even as they eat the family’s food and rationalize they are justified in stealing their only horses. Nicholson’s script doesn’t make it any easier by holding back info on both Dick’s gang and the men chasing them--referred to throughout as vigilantes. This means the “good guys” aren’t the law, they are some other form of justice. If they are justice at all.

As a viewer, this puts us in the position of wondering what we would do in a similar situation. Would we surrender and hope the “law” buys our story, or do we resort to whatever it takes to survive, effectively becoming exactly what our persecutors believe us to be? It’s a moral quandary that retains its relevance. Ride in the Whirlwind’s allegory is illustrative of all manner of prejudice, and can be applied to class, race, or what have you.

Hellman doesn’t leave his audience with many answers. There are no winners in Ride in the Whirlwind. And if there is any fault in the film, it’s that maybe there should be. It doesn’t feel like enough pays off to give the movie’s end much impact. Unless that’s the point, to not feel a sense of triumph or success, just measured relief. 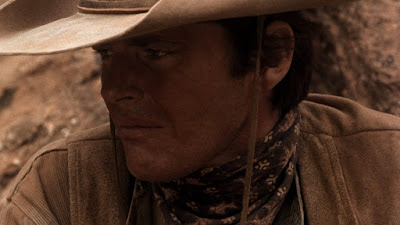