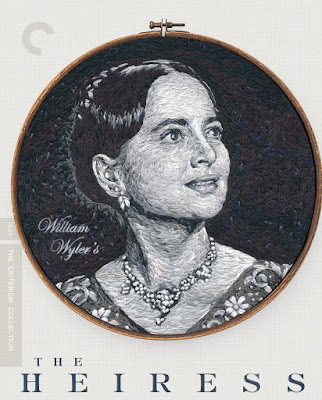 Just about every child fears turning into their parents, but like owners and their dogs ending up looking alike, some developments are inevitable.

So it is in The Heiress, a drama that at its root is about what a father will pass on to his daughter. Everything would be so much simpler were that to be nothing, but since it’s a rather large sum of money, it makes everything complicated. 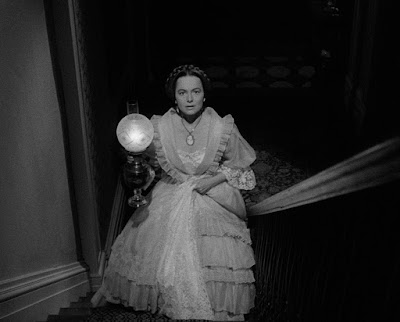 Olivia de Havilland stars as Catherine, the heiress in question, the sole child of widower Dr. Austin Sloper (Ralph Richardson, The Fallen Idol [review]). Catherine is shy and plain, having grown up not just sheltered, but stifled by her father’s continually comparing her to his porcelain view of her mother. Sharing the house with the pair is Austin’s sister Lavinia (Miriam Hopkins, Design for Living [review]), herself harboring the ache of a lost love, her own paramour a living memory, the stories she tells Catherine shaping the young woman’s view of marriage and romance.

Catherine is of the age where she should consider her future and the potential for marriage. Lavinia is doing her best to pry to girl out of her shell, insisting she go to social functions and even goading men into asking Catherine to dance. No goading is necessary, however, at one fancy soiree when Morris Townsend (Montgomery Clift, Red River) takes a liking to Catherine and begins to woo her. Within two days, they are engaged--a development that makes the good doctor none too happy. He sees Morris as a man of zero means, who blew threw his own small inheritance traveling in France, and who clearly only seeks his dowdy daughter’s fortune, he couldn’t possibly like her for who she is. 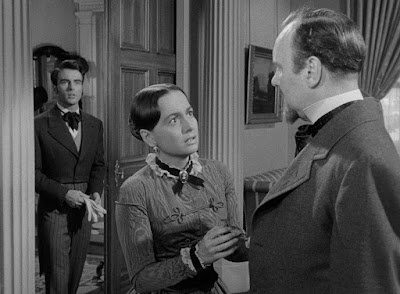 Released in 1949 and based on the novel Washington Square by Henry James, The Heiress is a buttoned-up melodrama, crafted with a meticulous attention to the social mores that would dictate how such romantic entanglements played out. Afraid that Dr. Sloper doesn’t like him, Morris jumps the queue and asks Catherine for her hand first; yet, when the doctor rejects the marriage, Morris beggars off, insisting the patriarch’s approval is necessary for their happiness--though the point of contention being whether Morris cares more for Catherine’s good health or for the fact that she’ll only receive 1/3 of her potential inheritance should Dr. Slope so choose. 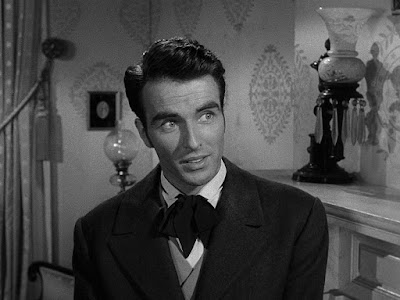 We never know, really. Montgomery Clift is at his best here. He’s handsome and charming, but also intensely awkward. He seems sincere, but mercurial, so it’s hard to judge his motivations. William Wyler doesn’t cut away to show Morris sharing any secret confidence. The closest we get are his private times with Lavinia; he gets looser around the older woman, more cavalier. It does give us pause. But then, maybe he’s just more comfortable around her because she isn’t judging him. If he is lying, Lavinia would still prefer Catherine be happy to Morris’ motives being pure. 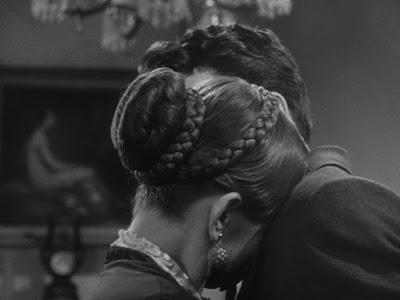 The crux of Henry James’ story, and the script by Ruth and Augustus Goetz (adapting not just the novel, but their own stage play), is how Catherine views herself versus how others view her. If Morris is to be believed, he sees something in her that others do not; if her father is to be believed, she is severely lacking. Richardson plays Sloper as haughty, impetuous, and cruel, but with enough warmth to suggest he does want better for his daughter. In particular, he wants her to find her own voice, though ironically he takes the brunt of it when she does. Little would he expect that his acidity is something she would also inherit. 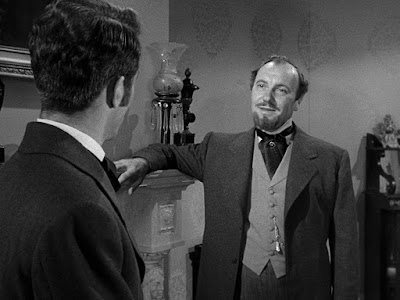 For her part, de Havilland is marvelous, delivering a nuanced performance that convincingly takes Catherine from spinster to dame. The script allows her to make gradual changes, but when the full transformation occurs, it’s still the same woman, despite being practically the polar opposite to how the character began. I think the real reason for this is that de Havilland brings enough natural charisma and depth to the role, that it allows us to see what Lavinia and Morris see in Catherine, enough to reject public perception. Catherine is the underdog, and to be rooted for. Thus, it stings to see her clam back up, to become her old man--haughty and cruel. Her rejection of the maid’s compliment is as demeaning as all the times Dr. Slope rebuked her. It’s these character moments that make The Heiress so enticing. Smartly, Wyler keeps the pyrotechnics dialed down, and he and director of photography Leo Tover (The Day the Earth Stood Still) keep the camera steady. All the drama is in the dialogue, and a carefully crafted facial reaction is more telling than an emphatic zoom. 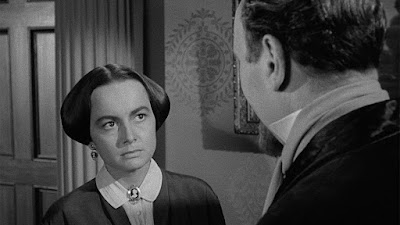 What surprises me the most about The Heiress is how it sticks to its vision. That motivations remain ambiguous is a triumph to itself, but that Wyler was allowed to stick to an ending that conventional Hollywood wisdom would usually have deemed too dark puts The Heiress a cut above most other costume dramas of the time. In fact, the increasing mania of the last man standing in the final scene haunts me still.

By the by, for those of you who would have sworn that Clift’s Morris was about to break into the perennial Elvis Presley hit “Can’t Help Falling in Love” when showing off his piano skills, your ears do not deceive you! It turns out that the 18th-century tune “Plaisir d’amour” would later inspire one of my favorite love songs. 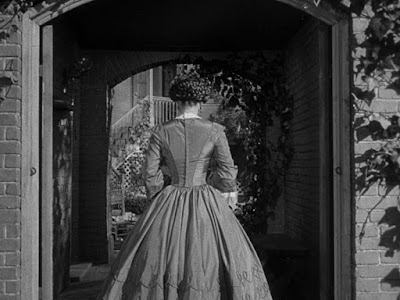