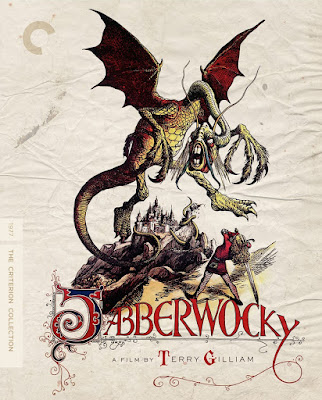 Lewis Carroll’s poem “Jabberwocky” is considered the greatest nonsense poem of all time, inventing its own language and creating a picture of a monster that it is both fearsome and silly. Knowing that, and watching Terry Gilliam’s first feature-length film as a solo artist, 1977’s Carroll-inspired Jabberwocky, gives some context to where the filmmaker is coming from.

But I’m not convinced that all of the above is a good thing. 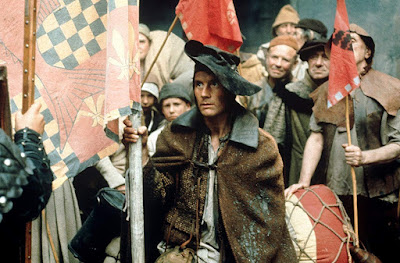 I don’t quite get what to make of Jabberwocky. I decided to watch it after viewing Gilliam’s latest, The Man Who Killed Don Quixote, a cursed production about a cursed production and how art can drive one to madness. It’s a dull mess. The cosmos did everything it could to warn Gilliam away from this folly, but the auteur identified with the dizzy Don a little too much, it seems. You’d think after a couple of decades that Gilliam would have figured out The Man Who Killed Don Quixote; my guess is that instead the maestro shed no ideas gathered across all those years, landing this beast with all the brambles and barnacles of various development hells intact.

Too bad then that I don’t see much clearer thinking behind Jabberwocky. I don’t understand what this film is supposed to be. The obvious answer would be a satirical fantasy, mining similar comedic veins as The Life of Brian and Monty Python and the Holy Grail, but without the talented Python ensemble to back their American partner up. 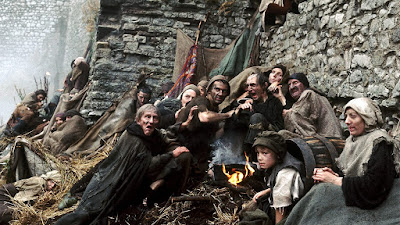 Jabberwocky is lit like it’s Barry Lyndon, but its set decorators are more obsessed with grit and grime and making everything oily and dirty. And the director himself with scatological humor. We see more than one person defecate, and the hero of the piece, Michael Palin’s typically clueless Dennis, is urinated on twice. Dennis is every Terry Gilliam protagonist: a befuddled doofus buffeted about by society, trapped in a quagmire of red tape, bad faith, and inexplicable social mores, obsessed with love that is beyond his reach, but ultimately stumbling into some semblance of a resolution. 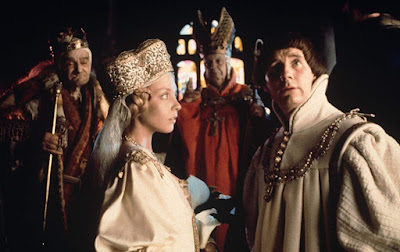 Palin gives it a good try. This is totally his wheelhouse, after all. Any appeal that Dennis has comes from Michael Palin’s genuine and undeniable likability. The character has no traits worth rooting for--he’s single-minded, self-absorbed, and lacking in finesse or taste--yet one can’t look at Michael Palin’s innocent, open face and wish him to fail.

Ostensibly, Jabberwocky is a quest story. The titular Jabberwocky is terrorizing villages in the kingdom, and our expectation is that once Dennis leaves his small hamlet for the royal city, he will somehow be put in position to slay the beast, and thus be the hero he didn’t know he could be. And we do get there, but not before a lot of detours into undercooked sketches where Gilliam satirizes medieval culture and takes the piss out of more romantic views of the period. You fancy being a knight of the Round Table? Well, be prepared to live in filth and squalor amongst unenlightened people with no real moral compass. The level of humor here is maybe best illustrated by Dennis and the rich merchant of his village, Mr. Fishfinger (Warren Mitchell), laughing about a man who got so scared his teeth turned “snowflake white.” Get it? They are all gross and are too stupid to know it! 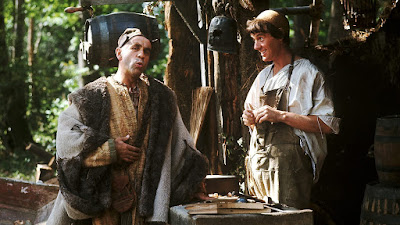 Gilliam plays a lot of these moments as an afterthought. In the city, we see other merchants racing their litters, pushing the men carrying them to the limit, just to arrive at court first. It’s a nice way to show how these greedy nobles behave, but there is little payoff. Gilliam is off to the next idea, ill concerned with the connective tissue. Which might be fine if these gags were just funnier. The witticisms aren’t as sharp as the ones we got in Holy Grail, nor does the film have anything to say, a la Life of Brian.

And yes, I know, this is supposed to be nonsense, and I am probably taking my comedy way too seriously. Except, when you’re not laughing, what else do you have to think about but why? 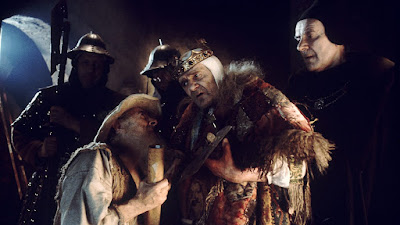 I’d also suggest that if Jabberwocky is intended as nonsense, then its conforming to our narrative expectations in the final 30 minutes of the movie violates its own mission. As predicted, Dennis ends up in service to the knight who goes after the Jabberwocky, and it takes expected deviations from there. Amazingly, with the plot getting more straightforward, Jabberwocky somehow becomes even more flat. I didn’t think it was possible. The monster reveal, however, is fantastic, with Gilliam using extreme angles and an obstructed view to slowly ratchet up the feelings of dread and fear. Plus, the monster is really cool, an appropriately odd-looking practical construction. 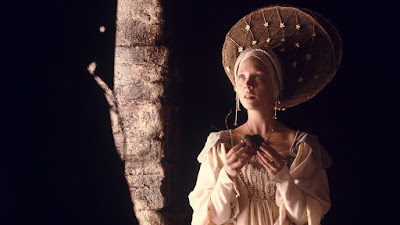 Let’s be honest, Gilliam is at his best when he has someone keeping him in check. While Jabberwocky could arguably be forgiven as an effort by a filmmaker finding his own way, it has that overloaded feeling that permeates a lot (if not all) of the director’s work. His best films, like Brazil [review] and The Fisher King, succeed because they are tightened up (I can’t imagine what the studio execs who hated the ending of Brazil would think of Jabberwocky’s finale), and The Adventures of Baron Munchausen is the example that proves the rule, its volume and excess making it exciting. At his worst, no one appears to be watching--either behind the scenes or in front of the screen (Tideland and The Zero Theorem come to mind). Jabberwocky feels like a filmmaker unleashed...but almost like he still has to crawl before he can really run.