THE DAY HE ARRIVES - CRITERION CHANNEL

This review was originally written in 2012 for DVDTalk.com. It is reprinted here on the occasion of the Criterion Channel launching a triple feature of Hong Sang-Soo films that also includes Claire's Camera and On the Beach at Night Alone. 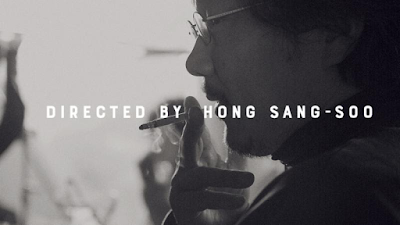 Seongjun is a filmmaker who made four films before abandoning the craft and becoming a professor at a small school in the Korean countryside. On the occasion of The Day He Arrives, the latest from Hong Sang-soo (Woman is the Future of Man; In Another Country [review]), the emotionally wounded artist (played by Yu Jun-Sang) has returned to Seoul to visit a friend, Youngho (Kim Sang Jung). On that first day, the friend is nowhere to be found, and so Seongjun wanders his old stomping grounds, running into an actress he knows, drinking with some film students, and when deep in his cups, visiting his ex-girlfriend, Kyungjin (Kim Bo-Kyung). There is still pain between them, and also some love, though when she sends him away, it seems for the best.

When we see Seongjun again, it's the next morning, and he is back on the hunt from Youngho. If the circumstances look the same, it's because they are. The Day He Arrives, for the purpose of this film, is every day, and every drunken night gives over to the same hungover morning. Seongjun realizes it...and he doesn't. The only time he acknowledges the passage of days, it's when he runs into the actress again. He remembers seeing her the day before, and she remembers seeing him. The air around her is different. 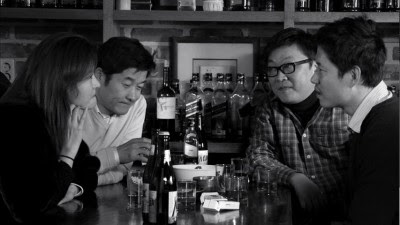 On day 2, Seongjun connects with his friend, and they go out together, hooking up with his colleague, a woman named Boram (Song Seon-Mi). Youngho and Boram are film professors, as well, and they teach together in Seoul. Boram is attracted to Seongjun, she likes his films, and she's curious about his broken heart. He is distracted, however, when they go to a bar called Novel, and the pretty owner turns out to be a dead ringer for Seongjun's ex-lover. Indeed, in a move reminiscent of Bunuel (or perhaps Lynch), Kim Bo-Kyung also plays Yejeon. The director is drawn to this woman, the coincidence is too overpowering. It must mean something, right? 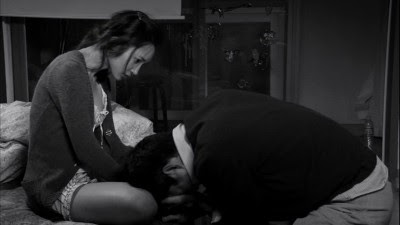 This is the central philosophical question that Hong Sang-soo sets out to examine in his mesmerizing drama. The repetition of events in The Day He Arrives is not an empty gimmick, it's a considered choice that has been undertaken with purpose. As each new version plays out, different things happen. On day 3, an actor friend joins the group. Seongjun also makes progress with the bartender. On day 4, Youngho is drunk and reveals himself a little more. Each character is getting a kind of do-over. They take more risks, speak more truths, and essentially get at what they are trying to get at.

I suppose how you interpret the changes and escalation is going to determine how you assess The Day He Arrives. It may also be a personality litmus test. The liner notes to the film, written by critic James Quandt, are titled "Déjà Vu," but I think that's too tidy a concept for the existential riddle that Hong is posing. His main character sets the parameters when he says he doesn't believe that coincidence has meaning. Life is a series of random events, and we spend so much time trying to connect them, we risk missing that there is only one inevitable outcome. Whatever circumstances keep bringing these people together, whatever common thoughts drive them (throughout the movie, conversations are repeated with speakers switching roles and/or echoing each other in the discussions), this is all chance. For the optimistic among you, the repetition of these happenings ultimately puts luck on your side. In a kind of Groundhog Day romantic scenario, the characters can get better, do better, and get closer to some kind of true connection. If you're pessimistic like me, the randomness only proves to emphasize how alone we, as humans, really are. Every day, Seongjun gets to know the barmaid a little better, gets to like her more, and eventually succeeds in being with her...only to let his own emotional dysfunction dictate his next move. It's like the old saying goes, no matter where you go, there you will be. Seongjun can't help but be alienated. He is eternally the outsider, always arriving, never staying. 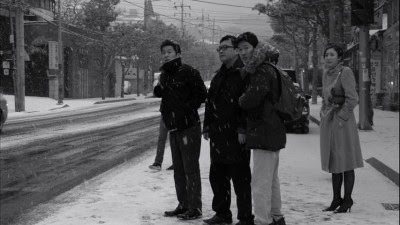 The Day He Arrives, for all its long scenes of conversation, is a tightly edited film. For its surreal concept, it's also surprisingly grounded. The acting and the writing are naturalistic. Hong never forces the drama, nor does he spell out his intentions through overly explanatory or self-reflexive dialogue. Instead, his references are subtle, and he lets the actors be themselves within the scene, lets them find the truth. The camera probes occasionally, moving in tighter on a moment when further intimacy is required, but otherwise it's unobtrusive. We hang back and watch, we aren't pushed into the center of the intellectual mystery. This, of course, makes it all the more intriguing. Hong seduces us with the unknowable, and it's hypnotizing. Even as we begin to discern the magician's tricks, the illusion is never dissolved--meaning we are there wholly and completely when the final devastating day comes at last. 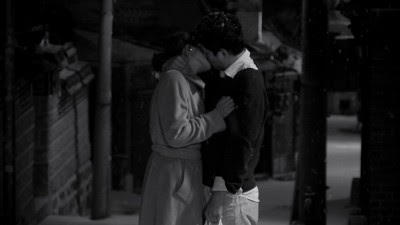