I intend to review the full Before Trilogy when the release comes out this February, but in the meantime, here is my original review of Before Midnight written for DVDTalk.com for the movie's theatrical release in 2013. 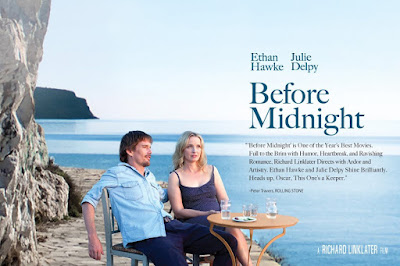 It hit me with a heavy thud early on in Before Midnight when Ethan Hawke's Jesse expresses his disbelief that he is now 41 years old: I have been the exact same age as the characters in this series whenever each movie has come out. The initial meeting between Jesse and Celine (Julie Delpy) happened when we were all 22 (Before Sunrise [review]), and then ten years later in Before Sunset [review], at the onset of our 30s (so far the best decade in terms of growing up and growing old), and now we rejoin the narrative as we are settling into middle age.

I'll be curious to hear what my younger friends take away from Before Midnight. The ongoing relationship and occasional romance that the characters have with one another, and which they also have with us, the audience, is not getting any easier, even as it grows more comfortable. Despite a decade together and all the ups and downs that come with it, the relationship between these two (dare we say?) soulmates is just as deeply furrowed as it's always been. They can joke together and they can appreciate the wonders of the world, but they also disagree and fail to communicate and have to push hard to keep the love standing between them.

[Note: Other reviewers have treated some of the plot details about Before Midnight as spoilers; I don't think much of this hand-wringing is warranted. What I detail below is discovered within the first several minutes of the movie, but should you be concerned, don't read between the next two photographs. Then again, if you're that invested, why are you reading this instead of getting in line for a ticket?] 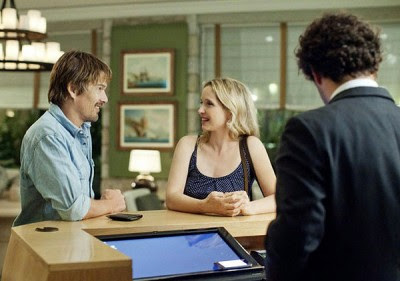 This third go-around, directed in the same au-naturale style by Richard Linklater, who has also shared co-writing credit with his stars since 2004's original sequel, finds Celine and Jesse in Europe at the tail-end of a vacation. Jesse has just put his son back on a plane to Chicago to be with his mother, and the farewell was tough. The boy is about to start high school, and Jesse realizes he has lived away from the child most of the kid's life. He and Celine have their own children, whom they live with in Paris, and Celine has a fulfilling job, all of which makes even the thought of moving the family to America problematic.

That's the essential situation that gets Before Midnight underway, providing the complications that will cause the extended conversation that forms the bulk of the film. There is one pitstop before the ball really gets rolling. Jesse and Celine are staying at the Greek villa of an older man who admires Jesse's writing. With them are two other couples: a funny, loving duo who are a generation ahead of Jesse and Celine, and a newer pair of lovers that are the same age that Jesse and Celine were in Before Sunrise. In a spirited dinner table conversation, Linklater and crew give us a full representation of the stages of life as they exist now, and how age and origin informs each romance. Alongside the older host (veteran cinematographer Walter Lassally) is a widow (Xenia Kalogeropoulou), who gives the film's most emotional monologue when remembering her late husband. It's this moment that sets up one of the film's main themes: the preciousness of time and how our memorializing of the same distorts it. It's a beautiful segment, and the first of many times I teared up during Before Midnight. 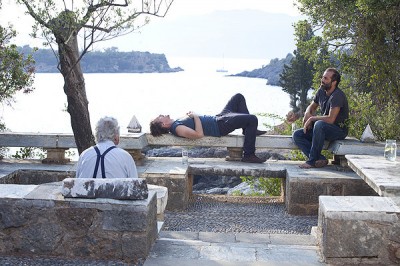 It's after this meal that Jesse and Celine depart on their own, heading down from the villa to spend a night alone in a hotel. Unfortunately, without saying much more about specifics, the tension that has been brewing between them reaches full steam, and the romantic night turns into a difficult argument. Both participants are equal part aggressor and victim. They are alternately cruel, unfair, and selfish. They are also vulnerable and protective of what they have, both as individuals and together. You will find your sympathies shifting back and forth. Jesse can't calm the situation without saying something stupid, whereas every time Celine gives an inch, she takes it back with sharp-tongued fury. Exposition is smartly folded into the back-and-forth, catching us up on what got them from Before Sunset to here, and the more we learn, the more we realize that they don't always know each other--or even themselves.

Which is the real heavy-duty truth that Before Midnight reveals about not just long-term relationships, but also what it's like to be in middle age. From what I am discovering, one's 40s are a period of self-assessment and self-doubt. Both Jesse and Celine are asking where the time has gone, reevaluating their decisions, and wondering how much time they have left to get it right. Listen to what they say, all of those things are in there. Likewise, they are questioning why their bodies are changing, why they are often not in control of their own impulses, and why despite four decades of wisdom, they can't change their worst traits (if they even need to). Being in your 40s feels like being a teenager again, you're suddenly not in control of your physical form or your mental and emotional state. For the past twelve months, I've personally been living in the I Heart Huckabees "How am I not myself?" rubber ball scene on perpetual loop, and so it struck me deeply to hear both Jesse and Celine ask the same basic question of each other: "How am I not the person you fell in love with?" 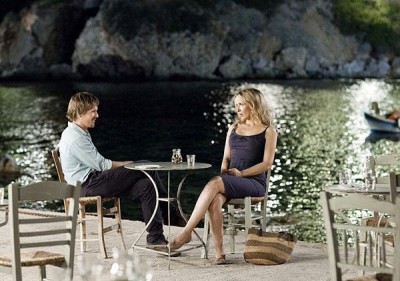 That Linklater, Hawke, and Delpy manage to balance so many things, to make their characters three-dimensional and flawed while also keeping them likable, and make Before Midnight as uplifting and cathartic as it is emotionally distressing, is really the secret to why this series has managed to sustain its quality and appeal. The level of talent on display here, the depth and nuance of the performances and of the writing, is incredible. I'd also posit that it's a chemistry that is impossible to replicate. Delpy has starred in and directed two very similar movies, 2 Days in Paris [review] and 2 Days in New York [review], both of which fail to conjure the same magic. She can't do it without Linklater or Hawke any more than they could do it without her and each other. It's like the Beatles as a unit vs. the Beatles apart. The whole is greater than the sum of its parts.

And so we are left again at an impasse, a momentary truce that may hold. Like the devastating ebbs and flows of the union in Ingmar Bergman's Scenes from a Marriage, we will never be sure from one entry to the next where our subjects will land. Somewhere on the internet, I am sure a Before... franchise fan has already started a doomsday clock counting down the next ten years, marking the time until we all meet again. The point, though, is not to count the minutes or the years, but to live them. Only then will the next reunion's lessons make sense, or even this one's be justified. 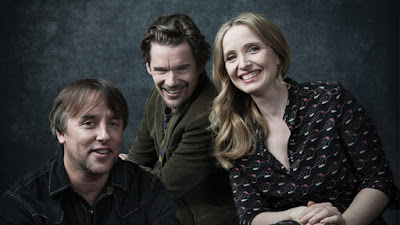 UPDATE: It took me over a year, but here is my 2018 review of Before Midnight.