GUY AND MADELINE ON A PARK BENCH - CRITERION CHANNEL

This review was originally written for DVDTalk.com  in 2011. 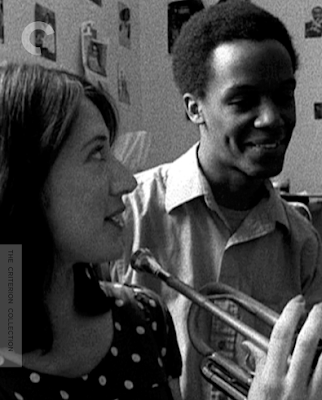 The spirit of John Cassavetes is alive and well and shooting on the streets of Boston.

Writer/director Damien Chazelle's Guy and Madeline on a Park Bench is a 2010 indie relationship film shot in a classic verite style that hearkens back to the great work Cassavetes was doing in the 1960s, as well as the influential films of the Cahiers du cinema crowd. Guy and Madeline has also earned comparisons to Jacques Demy's The Umbrellas of Cherbourg [review]. It has a romantic heart that beats to a jazzy rhythm, one that is purposefully out of step with the manic drums of modern music. It's an anachronistic conceit that Chazelle wears right out in the open. I get the sense he'd be pleased by all the comparisons and references to possible influences. It's all intentional, all by design. Why else choose to shoot on 16mm black-and-white film if not to remind us of cinema long past?

The story of Guy and Madeline is simplicity itself. Guy (Jason Palmer) is a jazz trumpet player who ruins his young relationship with Madeline (Desiree Garcia) when he cheats on her with Elena (Sandha Khin). This quick hook-up is an ill-considered impulse, Guy only just met Elena on the subway, and eventually, he will come to regret the decision when the new girl gets clingy. While he's figuring this all out, Madeline has decided to move on, and she begins exploring the possibility of getting out of Boston and going to New York. 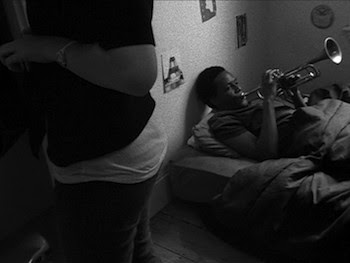 The principle players of Chazelle's film are all dreamers in some fashion. Guy is a music maker. Like many musicians before him, he's more obsessed with the complications of melody than he is the complications of l'amour. To him, people are played in much the same way he plays his horn. It's not for nothin' that his seduction of Elena is achieved merely by touch. Chazelle avoids making Elena an empty device, giving her an interior life, as well. She is a lonely girl all by herself in the city. Just before meeting Guy, she hits on a street performer; just after, she encounters an old man wandering the streets looking for a connection. (He is played by a fellow named Frank Garvin. Save the "male prostitute" jokes for Fred.) It's hard to tell if none of these connections work out for her due to naïveté or selfishness, though it's also hard not to feel sorry for her either way. Sandha Khin has a broken quality that, if natural, signals very good casting, but if it's intentional, it signals a very good actress. (One wonders, given that she first introduces herself by her own name, only to correct herself and give her character's name, a flub Chazelle decided to leave in.)

Madeline proves to be the real dreamer, however. Guy and Madeline on a Park Bench is full of music, jazzy numbers composed by Justin Hurwitz and recorded by local jazz musicians and the Bratislava Symphony Orchestra. Most of it is either background scoring or live performances by Guy and his friends, including one tap dance routine that spontaneously erupts at a party. It's live music within the scene, and thus grounded in the "real life" of the movie; Madeline's songs are more in line with the old-school, theatrical musical tradition. She sings her tunes as expressions to the self, and the instrumentation backing her up is essentially the music she hears in her head. For her second number, she also imagines her co-workers dancing along, turning her mundane waitressing job into a choreographed performance. As the wronged party in her relationship with Guy, she is the true romantic, and so also the one who fantasizes about a life free of everyday confinement. He may be the artist, but she's the one with an artist's soul. 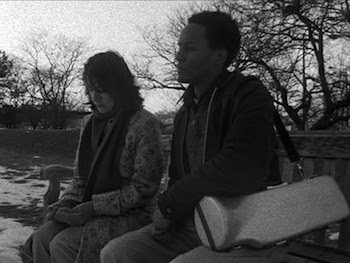 Guy and Madeline on a Park Bench is shot in a down-and-dirty style. Scenes are loose in the moment, and there is an air of improvisation to the whole affair. The actors appear to be either unprofessional or first-timers who aren't overly polished, and yet who are comfortable onscreen. Chazelle served as his own cameraman (and he also co-edited with W.A.W. Parker), and he favors intimate close-ups and cramped quarters where characters can't escape one another. (A shower scene involving Guy and Elena is particularly uncomfortable.) Street scenes appear to have been captured as they happened, with plenty of real life occurring in the backgrounds. As the music takes over, the camera backs away and the image widens. The editors also put their scissors down, letting the takes run long the way they would have in Golden Age Hollywood, when you could actually watch the performers do their thing without lots of frenetic trickery.

The final sum of all these parts is a fascinating, playful merging of styles. It's MGM by way of the Nouvelle Vague, and though at times the story feels underdeveloped, the emotion is authentic and the characters real enough to make them worth watching. And, of course, there is Hurwitz's excellent music, cut in at all the right times to make sure our attention never drifts. Guy and Madeline on a Park Bench builds to a satisfying, yet open-ended conclusion, where consequences for previous choices come to bear and there is enough honest growth that it leaves us hopeful that they will make better ones down the line. This charming mash-up also makes you wonder what will be down the line for the people who squished it all together. Damien Chazelle has certainly set a unique bar for himself. Guy and Madeline on a Park Bench combines the personal with spectacle in such a way that makes you want to see more, but the fear is Chazelle could go too far to either side and lose what made this first effort so interesting in the first place. It'll be a balancing act, one I'll be watching while holding my breath and crossing my fingers, hoping against hope that the filmmaker makes it all the way across.

2018 Update: Well, I certainly had high hopes for Damien Chazelle. Too bad he went too far in the wrong direction. While I was conflicted about Whiplash--my review is here--I found La La Land execrable. Chazelle should have stuck with this, his original mission to save jazz. 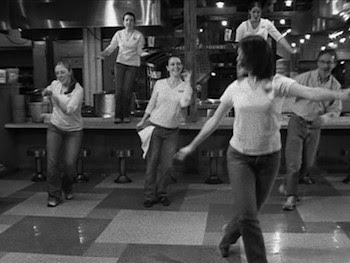