THE WORLD, THE FLESH AND THE DEVIL - CRITERION CHANNEL

“In Christian theology, the world, the flesh, and the devil are often traditionally described as the three enemies of the soul.” - via Wikipedia 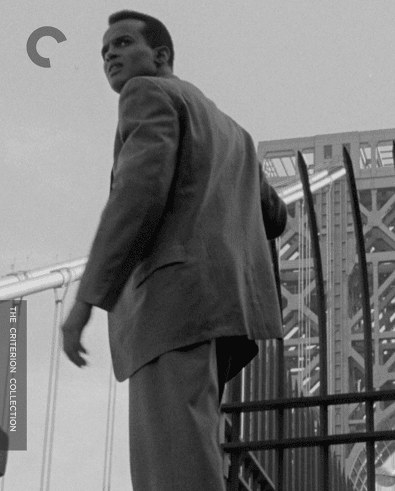 A nuclear event has occurred and wiped the Earth of humanity. Ralph, a sanitation worker who was underground when the disaster went down, emerges from the sewers to find he just may be the last man alive. Empty buildings, abandoned cars, not a trace of a single living soul. Ralph hits the road and heads to New York, which he finds just as empty. But then, the big city is all his now.

It’s also a time capsule of 1950s New York City in all its splendor. Cinematographer Harold J. Marzorati makes the most of the empty Big Apple to show us just how immense and glorious the architecture is--and how small Ralph appears within it. I can’t think of another film except Cameron Crowe’s Vanilla Sky that pulled off scenes where New York was this empty. Had MacDougall chosen to shoot The World, The Flesh and the Devil in an average town, the impact would have been lessened, the catastrophe would not have come across with equal power. The same men who built these awe-inspiring skyscrapers also built the bombs that wiped out their inhabitants.

You guessed it: Ralph is not alone. Running time on The World, The Flesh and the Devil is just over 90 minutes, and there is one person for each 30 minute chunk. Ralph is on his own for the first third, but he meets Sarah a half hour in. Then, for the final 30, Benson is on hand. With each addition, Ralph adjusts and tries to make life work, but he can’t escape the color of his skin.

You see, Ralph is African American. He is played by the singer Harry Belafonte, star of Carmen Jones and Uptown Saturday Night, and soon to be seen in theaters again in Spike Lee’s BlacKkKlansman. Filmed during the early years of the Civil Rights Movement, The World, The Flesh and the Devil doesn’t show us the aftermath of a society that has progressed beyond hatred and prejudice, but rather one that was been halted while the turmoil is still raging. So, when Ralph meets Sarah (Inger Stevens, Hang 'Em High), he is very much aware of the lingering dangers that would befall a black man spending time alone with a white woman. He is glad for the company--the first 1/3 of the film is him trying to keep himself amused, not too dissimilar from the first episode of the Will Forte sitcom Last Man on Earth--but not yet trusting of the new status quo.

This theme is not played as subtext, either. There is an amazing scene between Belafonte and Stevens where she cajoles him into cutting her hair despite his insistence he doesn’t have the proper skill and his ingrained, societal fear of touching her. He is nervous and a little humiliated and also angry that she can’t see what he sees. She gets upset, he loses his cool, and he calls her out on all of it, telling her that were they back in the pre-apocalypse version of the world, they wouldn’t even know one another, their lives would be so far apart. She doesn’t want to believe it, she wants to trust what she is feeling right now, but then, that’s also white liberal näiveté at its finest.

Yet, credit to Inger Stevens, she really sells it. There isn’t a false note from her, even as things grow more complicated. Her gaze is always distracted by Ralph, and her face always pained by his failure to believe her genuine feelings.

I suppose in one way you can say that the devil is Benson (Mel Ferrer, Elena and Her Men), the white man who comes to town by boat, and whom Ralph nurses back to health. His easygoing attitude and quick settling into enjoying the amenities Ralph has worked so hard to provide--electricity and running water among them--do smack of white privilege. Doesn’t matter how nice Benson is, Ralph’s suspicion is understandable. A famous exchange from the picture is when Benson says, “I have nothing against negroes,” and Ralph pointedly replies, “That’s white of you.”

What’s isn’t understandable, though--and what’s crazy for a film of the 1950s--is how Ralph literally pushes Sarah at Benson, insisting they be together, and Benson taking seriously the option that Sarah might choose otherwise. Which, compared to how Ralph doesn’t consider her choice at all, does put Benson one up on his rival. Their eventual showdown isn’t a black/white thing, however, it’s more of a man thing. It’s male posturing, and neither of them is a hero, even if Benson does cross the line into violence first. Man is the devil to man regardless of flesh.

How The World, The Flesh and the Devil resolves itself may be its most progressive stroke, with images of a black hand joined in a white hand, and bygones being bygones. As Rhianna might say, these three find love in a hopeless place. It’s a resolution that feels earned, a well-deserved optimism in the face of relatable cynicism. 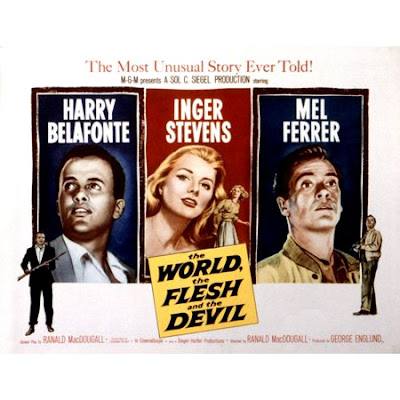 Criterion has dropped The World, The Flesh and the Devil on their streaming channel, and it’s one of those movies that I can’t believe I hadn’t seen sooner. It’s worth watching the intro by Barry Jenkins, writer and director of Moonlight, who details his random discovery of the film on TCM. I put it next to Larry Peerce’s 1967 juvenile delinquent story The Incident as New York films that use genre premises to tell us something about the human condition, and that should be much better known and screened way more often than they are.