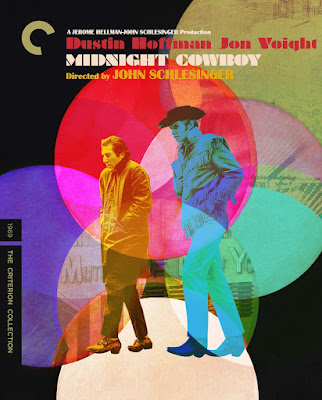 Midnight Cowboy is a movie about identity and denial, but it’s primarily a movie about failed expectations, how those first two things being in confusion fosters false hope for people looking for a way out. For a way to be themselves. From Joe Buck’s first hustle in New York--he expected to be paid, she expected a younger man to see her obvious beauty (provided she’s not a con woman looking to hustle him back)--to the finale and the trip to Florida, nothing turns out as the characters would choose to believe.

Released in 1969, Midnight Cowboy caused quite a stir. Its frank views of homosexuality and New York street life earned it the first ever X-rating. It’s hard to see now what all the fuss was about, this movie is surprisingly tame by today’s standards, but even as the controversy dims, the actual character drama remains as sharp as ever. Written by one-time blacklisted screenwriter Waldo Salt (Blast of Silence [review], Serpico) and helmed by British director John Schlesinger (Billy Liar [review], Sunday Bloody Sunday), Midnight Cowboy is a film that dares to be human, making no apologies for its characters’ foibles--something that always scandalizes those who might otherwise be inclined to look at those who are different as “less than.” 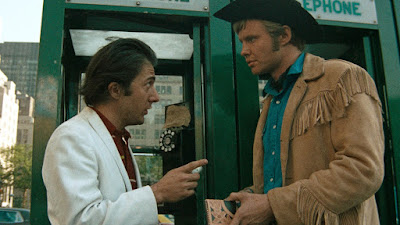 Though essentially a New York story, Midnight Cowboy not only ends in Florida, but it starts in Texas. That’s where the dumb-but-handsome Joe Buck (Jon Voight, Coming Home) hails from. He is heading to the Big Apple to make his way in the world, but also to bury some bad memories. His life comes to us in a series of increasingly surreal flashbacks, including being exposed to sex at an early age, abandonment, and later, assault and arrest. When he arrives at his destination, decked out in a fancy western shirt, fringe jacket, and hat, he looks more like a movie serial version of a cowboy than a legit frontiersman and, as he soon discovers, has chosen to present himself in a way that appeals more to gay men than the wealthy women he hoped to bed. After a series of mishaps and downright screw-ups, Joe Buck has no bucks. He’s broke. The resultant desperation leads him back to “Ratso” Rizzo (Dustin Hoffman, The Graduate [review]; Tootsie [review]), the grifter who screwed him the most. Probably fearing a beating from the big guy more than displaying any real contrition or compassion, Ratso helps him out. They start pulling cons together, making quite a pair--the short and sickly dark-haired Ratso, with his club foot and rodent-like vocal patterns, and the deceptively squeaky-clean beefcake Joe Buck. No reason to look twice when they walk down the road, not at all! 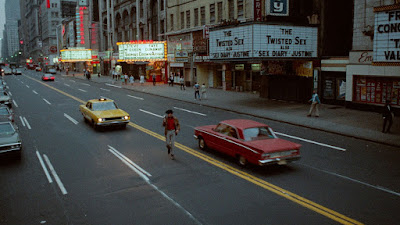 Modern audiences will have an easy time seeing through this partnership. There is a lot more going on below the surface, past the mutual parasitism and bickering. Ratso’s constant railing against homosexuals suggests a man who protests too much, and while Joe Buck’s confusion about his own sexuality is likely for real, his new friend draws out some kind of empathy. The two men alternately take care of one another. When Ratso’s street smarts prove poor medicine for his failing health, Joe Buck becomes caretaker. Sure, if you wanted to, you could see it as just two men finding a mutual benefit with one another in rough times, but that’s ignoring a lot of signs and signals. 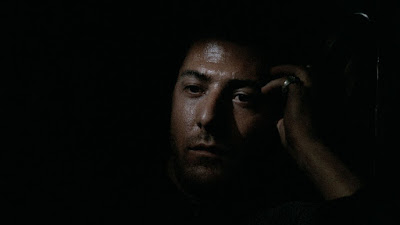 But again, let’s talk about expectations. What is it that Joe and Ratso expect from each other? It’s easy to see what Joe wants from each of his johns, and also how they in turn can’t allow themselves to follow through--be it Bob Balaban’s young student who becomes ill after going down on Joe in a movie theater (and seems to want a beating), or the older man (Barnard Hughes) that can’t even get that far (and gets a beating). It’s also clear how Brenda Vacarro’s party girl Shirley expects Joe to be an animal in bed and ravish her, only to have to take matters into her own hands and savage him instead. We also see how Ratso dreams of a better life where he is healthy and respected, and Joe is his best friend. (My favorite detail is how Ratso is so beloved by old women in those dreams. And how he is celebrated for his the cooking Joe previously criticized harshly.) 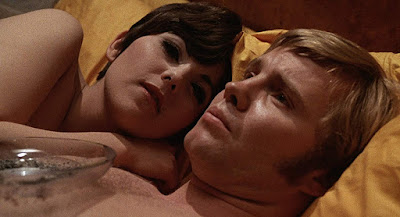 The expectation of Joe and Ratso as friends, however, is not so obvious. It takes a bit more reading between the lines. If you watch, you’ll note that their big arguments come when one slights the other--Ratso making fun of Joe’s clothes, Joe denigrating him for the winter coat Ratso stole for him--the way would-be lovers might react when they aren’t getting the proper notice from their respective objects of desire. There’s a lot of hurt and self-recrimination in there, especially in Ratso, who tears himself down by proxy. Credit where it’s due to Hoffman, who makes the oily little creep so easy to empathize with. The look on his face in the scene where he stands across the street and watches Joe try to pull a job in a women-only hotel is heartbreaking. There’s a real sense of relief when it doesn’t work out and Joe is tossed out the door. Ratso grabs him and runs him away from danger, his turn to be the protector.

As integral as they are to Midnight Cowboy, especially as they give Richardson the means to make explicit all the things that can’t be said, the pervasive dream sequences are a little dated. The psychedelic quick cuts predate Nicholas Roeg, and are about as effective, looking more ragged than controlled. (Also, shades of Ken Russell’s Tommy, particularly in Ratso’s Florida fantasy.) Though, full disclosure, I am primed not to like dream sequences, even when they are daydreams. And as a crutch, some of Joe Buck’s exhumed memories seem a little convenient and obvious. More effective to me are Richardson and cameraman Adam Holender’s on-the-street shots of New York--oh, that famous image of Joe Buck walking in the crowd, his hat high above all others!--and the way editor Hugh A. Robertson assembles the images, working with the singer Harry Nilsson, composerJohn Barry, and harmonica player Toots Thielemans’ music in a way that also prefigures MTV. The montage creates a dizzying effect akin to being a rube in the big city. 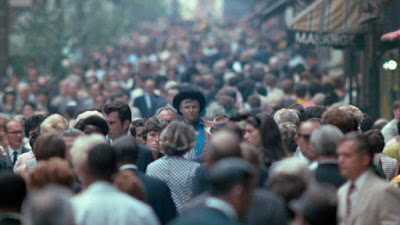 Which is what we are. Rubes. Our “innocent” laughter as the naïve Joe Buck that wanders onto 42nd Street at the start feels a little mean spirited and even dirty at the end, as we watch that same innocence drain from his eyes. And here is where Voight shines as an actor, because even as it’s clear that those eyes have seen too much, the actor also communicates that for all the distance he has traveled, the cowboy is still as lost as he ever was. 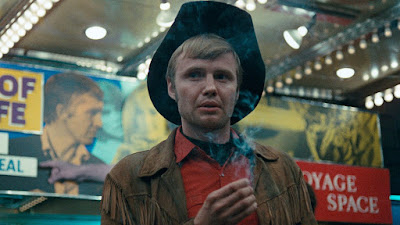 You're closing in on one thousand! I've always wanted to see Midnight Cowboy but never have. Great review!
Stephanie Griffin

UX design team
The best graphic design studios team stayed on top of the project by prioritizing effective communication, ensuring that all parties stayed on the same page.