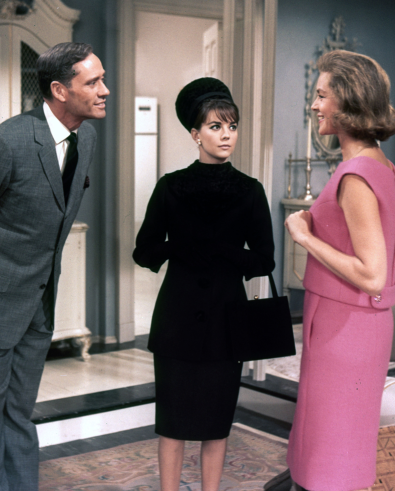 I liked this movie better the first time I saw it back in 2004, when it was called Down With Love. I know, I know, Sex and the Single Girl was made nearly three decades before Down With Love, but it's almost like Peyton Reed saw this flick and thought, "Good idea, but done badly. I'm going to do it right!"

Natalie Wood stars as Helen Gurley Brown. Yes, the former editor of Cosmopolitan once wrote a book using herself as an example of how the unattached 1960s woman could live a full and scandalous life. If her book Sex and the Single Girl hadn't also inspired Candace Bushnell and Sex and the City, this 1964 film adaptation would be the worst thing to come out of her publishing success. As Maxwell Smart would say, "Missed it by that much."

Sex and the Single Girl is a tedious black hole that sucks all comedy into its gaping maw and leaves only a forced, feverish mess in its stead. Not even the fine cast of Natalie Wood, Tony Curtis, Lauren Bacall, and Henry Fonda could escape its suck. Hell, so far reaching was its gravitational pull, even non-Hollywood types like Count Basie and Catch-22-scribe Joseph Heller managed get caught in the vacuum--one appearing in the film, the other actually contributing to the tepid script.

In the film, Helen Brown is a doctor specializing in women's issues who has been sandbagged by Stop magazine. The cover story on her calls her sexual qualifications into question, and to prove once and for all that the sexpert is a virgin, the rag's editor, Bob Weston (Curtis), concocts an elaborate scheme to get Helen into the sack. Pretending to be his neighbor, panty-hose salesman Frank (Fonda), he unloads marital problems on Helen to try to take advantage of her puny female brain and seduce her. Forget her doctorate, she's still a lady underneath that diploma! Innuendo and mistaken identities and even a protracted car chase ensue; unfortunately, hilarity does not.

Sex and the Single Girl was directed by Richard Quine, the man responsible for the only bad movie Audrey Hepburn made in the first phase of her career, Paris When It Sizzles. That movie was a lumpen comedic deformity, and Sex and the Single Girl wades through much of the same swampy territory, right down to that car chase. The cast tries really hard, but they just can't get out from under the burden of Quine and the mishmash script. The sexy stuff isn't sexy (excepting just about everything that Fran Jeffries does in the movie; she is apparently impervious to black holes), and by today's standards, no longer scandalous; the romance is barely lukewarm; there is even a half-hearted attempt at satire regarding modern conveniences that never quite jibes with the rest of the movie. But then, why should it? No one wants to be the one guy who shows up at the nudist colony wearing a suit. What a waste of effort that would be!

Sex offenders are amongst the worst of the worst of our society. We love to hate them. I will not make any excuse for them such as "they are misunderstood individuals," or they are a "product of their society."

I love this film , the way the actor show, nice

how to make your peni bigger with your hands

Its not a mattress. It is a chunk of froth that seems like you're sleeping on carpet padding or an outsized cushion. I'm disappointed and blonde sex styles. I cannot imagine why this mattress has gotten numerous good reviews. I'm never seen such a terrible mattress.

These are truly amongst the wonderful informative blogs.
big boobs girls sex

This written piece gives fastidious understanding yet.It’s amazing in support of me to truly have a web site that is valuable meant for my knowledge
Free Sex Dating Sites

I'd be trampled if all sites gave articles like these awesome articles.
Live Sex Chat

I continuously continue coming to your website once more simply in case you have posted new contents.
Kamagra

Well, it’s a nice one, I have been looking for. Thanks for sharing such informative stuff.
https://www.erectionpills.store/

Keep it up!! You have done the nice job having provided the latest information.
Kamagra Kopen