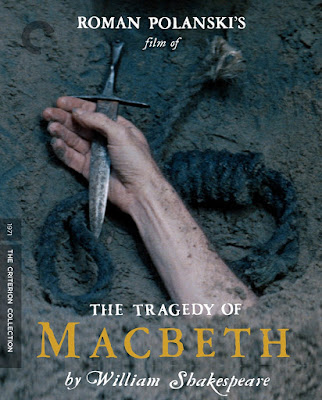 “Blunt not the heart, enrage it!”

If any line from Shakespeare’s Scottish play resonated with Roman Polanski when making Macbeth, the first film he directed following the murder of his wife Sharon Tate at the hands of the Manson Family, it surely was this. Because if there is anything the director brings to the oft-told tale, it’s more passion, more violence, and definitely more blood. No dull emotions here, only fire.

It feels almost silly to review Shakespeare adaptations and haggle over the plot. The stories themselves are so well-known, we are better off looking at the choices the filmmakers settle on, the aesthetic they establish: the audacious modernism of Baz Luhrmann’s Romeo + Juliet [review], the remodeling of Richard III as a World War II cautionary tale by Sir Ian McKellen [review], or the outlandish whatever-it-is of Julie Taymor’s Titus [review] all spring to mind as films that dared to change the shape of the source material in ways we’d never seen. In my review of Orson Welles’ 1948 staging of Macbeth, I focused on his use of cheap sets from a cowboy picture to create a surreal horror film and a more impressionistic, pointed examination of the play.

By contrast, Polanski’s 1971 Macbeth is far more grounded. Realistic locations, sparsely decorated, provide the dirt and the grime of the actual times and marries them to 1970s filmmaking. Like Welles, Polanski also leans into the spookiness of the piece, complete with a supernatural dagger and a trippy hallucination that, once decoded, ultimately hoists Macbeth on his own hubris. These elaborate visual flourishes really stand out, given more impact by the director’s restraint most everywhere else. Likewise, the gore. When violence does erupt and blood flows, it can be shocking. Yet, being a student of horror, Polanski also knows when an off-screen atrocity can be more effective. This Macbeth’s most unsettling scene is the murder of Macduff’s family. Polanski isolates us with the mother and her favorite son while they listen to the terrified screams of those being slaughtered throughout the castle.

Jon Finch, whom that same year would feature in Sunday Bloody Sunday and Hitchcock’s Frenzy, plays Macbeth. He at first appears younger than expected, his long hair and chiseled features making him appear more like a Shakespearean pin-up than a grizzled warrior. He is a brooding, romantic figure at this stage, showing flashes of ambition, but mostly indecisive. The change that comes after his murdering King Duncan (Nicolas Selby) is most pronounced. Polanski chooses to show the actual regicide here, so we can see that when Macbeth does finally make up his mind, it’s in the spur of the moment. His transformative action is not a decisive one. Even so, when we do see him wearing the crown, he is a changed man. His clothes are brighter, his grooming more considered, and even his posture is improved. It’s like a 1960s heartthrob reverting to a classic Hollywood leading man. Finch gives the elevated Macbeth more swagger, more confidence. He does, after all, believe himself to be charmed, the words of the three witches who prophesized these events giving him the false hope that all tragedies thrive on.

The aftermath of Duncan’s murder is another great moment of Polanski’s. He uses the emptiness of the castle and the quiet of night to amplify the paranoia of the Macbeths. With everyone else asleep, every stray noise, every cry of a distant owl, resonates with an undeniable volume. As Lady Macbeth, Francesca Annis (who was also Lady Jessica in David Lynch’s Dune) matches Finch’s own uncertainty to start with a single-minded drive, only to switch with him later on when she descends into madness. The framing regularly places them in the foreground, but centered and low, so that the massive stone castle that surrounds them just goes to show us how tiny this royal pair really is.

Roman Polanski’s Macbeth is real achievement. It manages to present Shakespeare’s drama as contemporary and vital without sacrificing any of the source. It’s as faithful as you’re likely to get, and yet very much it’s own thing, which is why it still remains as engrossing and disturbing even now.