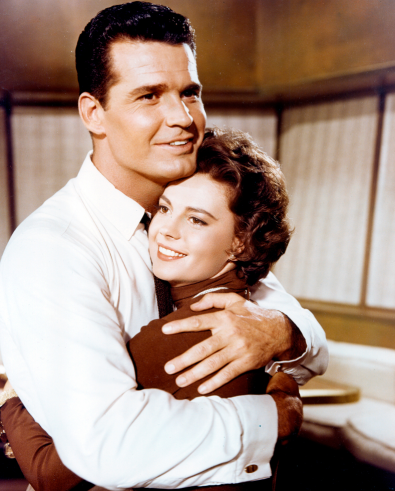 Though billed as a romantic comedy from the writer of Executive Suite [review], one should not confuse this lightweight laugher from 1959 with Cameron Hawley's fast moving drama. Of course, that earlier effort was adapted to the screen by Ernest Lehman and Robert Wise, and Cash McCall only gets Joseph Pevney, director of Tammy and the Bachelor, and two writers with varied resumes (Lenore Coffee wrote The End of the Affair, among others, while Marion Hargrove was mainly successful in television). The hands dealt were unequal.

James Garner is the title character, a businessman notorious for buying struggling businesses, fixing them up, and flipping them for a profit. Normally, if Cash starts looking at a company, its employees start quaking in their boots for fear of losing their jobs, but this time around, Cash has a motivated seller. Grant Austen (Dean Jagger) has been bent over a barrel by his most important client, and rather than take it, he decides to unload his plastics business and retire. Cash immediately offers him his asking price, and once he's got his hands in the company, starts to build an uber-corporation.

Cash has more than money in his sights, however, when it comes to Austen Plastics. As it turns out, he had a very brief romantic encounter with Austen's daughter, Lory, the previous summer. This affair has haunted the girl (played by Natalie Wood), leaving her melancholy and broken-hearted. At first, she is angry at seeing Cash again, but he woos her in the way he would close any business deal, and just as business deals get complicated, so does the lovemaking.

The flashback to the summertime meeting of Cash and Lory is probably the best example of why Cash McCall never really gets its engines running. This event is meant to be the crux of the entire story, but Pevney renders it as a bloodless, passionless embrace. Shot with the edges blurred and full of inexplicable close-ups, the flashback is like a dream half-remembered rather than an active motivator. There is no dialogue, Cash tells the story in voiceover, and so we are cut off from Lory's perspective--meaning Pevney sidesteps the enflamed desires of a young girl, the real heat of the moment. Not even the sight of a trembling, naked Natalie Wood can bail him out--particularly since Cash covers her up and sends her on her way. Is this a romance or propaganda for abstinence programs?

Pevney's direction is equally pedestrian throughout. He doesn't make much use of his widescreen framing, using mostly static shots and only really pulling out when trying to show the full group of gathered moneymen. Yawn. If I want to see that, I'll go to a banker's convention. Most of the acting is equally one-note. James Garner is all bluster, and Wood vacillates between brooding and feisty (okay, so maybe two notes, though, honestly, she is a feisty brooder, so they kind of blend). Only the always-wonderful Nina Foch gets a show-off scene. Playing the aging assistant manager of the hotel where the tycoon lives, her spurned advances, which border on the stalkerish, earn her a harsh dressing down from Cash. In response, she gets drunk and flings herself around her pink-hued apartment, hilariously stoking the fires of suspicion in the Austen clan.

I will admit, I was a little charmed by Cash McCall by the end. As a romantic comedy, it is serviceable enough that I was rooting for Lory and Cash to get it together, but the obstacle course on the way to love lacks the challenge of superior entries in this genre. Best to look elsewhere.